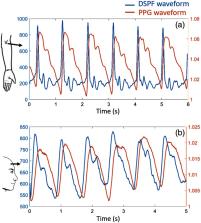 Aim: A diffuse-optics-based method, diffuse speckle pulsatile flowmetry (DSPF), was developed for fast measurement ( ) of deep tissue blood flow noninvasively. To validate its performance, both a phantom experiment and in vivo demonstration were conducted.

Approach: Over the past two decades, single-mode fibers have been used as detection fibers in most diffuse-optics-based deep tissue blood flow measurement modalities. We used a multimode (MM) detection fiber with a core size of for diffused speckle pattern detection. A background intensity correction algorithm was implemented for speckle contrast calculation. The MM detection fiber helped to achieve a level of deep tissue blood flow measurement similar to that of conventional modalities, such as diffuse correlation spectroscopy and diffuse speckle contrast analysis, but it increases the measurement rate of blood flow to 300 Hz.

Results: The design and implementation of the DSPF system were introduced. The theory of the background intensity correction for the diffused speckle pattern detected by the MM fiber was explained. A flow phantom was built for validation of the performance of the DSPF system. An in vivo cuff-induced occlusion experiment was performed to demonstrate the capability of the proposed DSPF system.

Conclusions: An MM detection fiber can help to achieve fast ( ) pulsatile blood flow measurement in the proposed DSPF method. The cost-effective device and the fiber-based flexible probe increase the usability of the DSPF system significantly.

Pathogenesis of myocardial ischemia-reperfusion injury and rationale for therapy.

Aslan Turer,  Bosco C Rowland (2010)
Since the initial description of the phenomenon by Jennings et al 50 years ago, our understanding of the underlying mechanisms of reperfusion injury has grown significantly. Its pathogenesis reflects the confluence of multiple pathways, including ion channels, reactive oxygen species, inflammation, and endothelial dysfunction. The purposes of this review are to examine the current state of understanding of ischemia-reperfusion injury, as well as to highlight recent interventions aimed at this heretofore elusive target. In conclusion, despite its complexity our ongoing efforts to mitigate this form of injury should not be deterred, because nearly 2 million patients annually undergo either spontaneous (in the form of acute myocardial infarction) or iatrogenic (in the context of cardioplegic arrest) ischemia-reperfusion. Copyright (c) 2010 Elsevier Inc. All rights reserved.

Failure of collateral blood flow is associated with infarct growth in ischemic stroke.