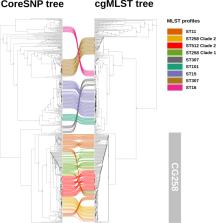 In this work we compared the most frequently used Klebsiella pneumoniae typing methods: PFGE, cgMLST and coreSNP. We evaluated the discriminatory power of the three methods to confirm or exclude nosocomial transmission on K. pneumoniae strains isolated from January to December 2017, in the framework of the routine surveillance for multidrug-resistant organisms at the San Raffaele Hospital, in Milan. We compared the results of the different methods to the results of epidemiological investigation. Our results showed that cgMLST and coreSNP are more discriminant than PFGE, and that both approaches are suitable for transmission analyses. cgMLST appeared to be inferior to coreSNP in the K. pneumoniae CG258 phylogenetic reconstruction. Indeed, we found that the phylogenetic reconstruction based on cgMLST genes wrongly clustered ST258 clade1 and clade2 strains, conversely properly assigned by coreSNP approach. In conclusion, this study provides evidences supporting the reliability of both cgMLST and coreSNP for hospital surveillance programs and highlights the limits of cgMLST scheme genes for phylogenetic reconstructions.

W Van der Pol,  Earl S. Ford,  Susan E. Bray … (2013)
Multilocus sequence typing (MLST) was proposed in 1998 as a portable sequence-based method for identifying clonal relationships among bacteria. Today, in the whole-genome era of microbiology, the need for systematic, standardized descriptions of bacterial genotypic variation remains a priority. Here, to meet this need, we draw on the successes of MLST and 16S rRNA gene sequencing to propose a hierarchical gene-by-gene approach that reflects functional and evolutionary relationships and catalogues bacteria 'from domain to strain'. Our gene-based typing approach using online platforms such as the Bacterial Isolate Genome Sequence Database (BIGSdb) allows the scalable organization and analysis of whole-genome sequence data.

Johann D D Pitout,  Patrice Nordmann,  Laurent Poirel (2015)
The management of infections due to Klebsiella pneumoniae has been complicated by the emergence of antimicrobial resistance, especially to carbapenems. Resistance to carbapenems in K. pneumoniae involves multiple mechanisms, including the production of carbapenemases (e.g., KPC, NDM, VIM, OXA-48-like), as well as alterations in outer membrane permeability mediated by the loss of porins and the upregulation of efflux systems. The latter two mechanisms are often combined with high levels of other types of β-lactamases (e.g., AmpC). K. pneumoniae sequence type 258 (ST258) emerged during the early to mid-2000s as an important human pathogen and has spread extensively throughout the world. ST258 comprises two distinct lineages, namely, clades I and II, and it seems that ST258 is a hybrid clone that was created by a large recombination event between ST11 and ST442. Incompatibility group F plasmids with blaKPC have contributed significantly to the success of ST258. The optimal treatment of infections due to carbapenemase-producing K. pneumoniae remains unknown. Some newer agents show promise for treating infections due to KPC producers; however, effective options for the treatment of NDM producers remain elusive.

Z Qureshi,  Mary C Kilayko,  Emilia Sordillo … (2012)
Klebsiella pneumoniae producing Klebsiella pneumoniae carbapenemase (KPC) has been associated with serious infections and high mortality. The optimal antimicrobial therapy for infection due to KPC-producing K. pneumoniae is not well established. We conducted a retrospective cohort study to evaluate the clinical outcome of patients with bacteremia caused by KPC-producing K. pneumoniae. A total of 41 unique patients with blood cultures growing KPC-producing K. pneumoniae were identified at two medical centers in the United States. Most of the infections were hospital acquired (32; 78%), while the rest of the cases were health care associated (9; 22%). The overall 28-day crude mortality rate was 39.0% (16/41). In the multivariate analysis, definitive therapy with a combination regimen was independently associated with survival (odds ratio, 0.07 [95% confidence interval, 0.009 to 0.71], P = 0.02). The 28-day mortality was 13.3% in the combination therapy group compared with 57.8% in the monotherapy group (P = 0.01). The most commonly used combinations were colistin-polymyxin B or tigecycline combined with a carbapenem. The mortality in this group was 12.5% (1/8). Despite in vitro susceptibility, patients who received monotherapy with colistin-polymyxin B or tigecycline had a higher mortality of 66.7% (8/12). The use of combination therapy for definitive therapy appears to be associated with improved survival in bacteremia due to KPC-producing K. pneumoniae.

This is an open-access article distributed under the terms of the Creative Commons Attribution License.