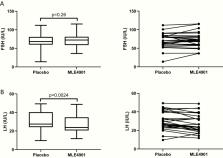 Journal: Journal of the Endocrine Society

Neurokinin 3 receptor (NK3R) antagonism is a promising novel treatment for menopausal flashes. However, to avoid adverse hormonal effects it is clinically important to first confirm whether gonadotropin and estradiol concentrations change as a result of their administration.

NK3R antagonists do not increase serum estradiol or FSH despite their reduction in hot flashes. This is clinically significant and highly reassuring for women who have a contraindication to conventional hormone therapy such as prior/existing breast cancer and/or thromboembolism.

Johannes Veldhuis,  S Pincus,  D. Barry Keenan (2008)
Endocrine glands communicate with remote target cells via a mixture of continuous and intermittent signal exchange. Continuous signaling allows slowly varying control, whereas intermittency permits large rapid adjustments. The control systems that mediate such homeostatic corrections operate in a species-, gender-, age-, and context-selective fashion. Significant progress has been made in understanding mechanisms of adaptive interglandular signaling in vivo. Principal goals are to understand the physiological origins, significance, and mechanisms of pulsatile hormone secretion. Key analytical issues are: 1) to quantify the number, size, shape, and uniformity of pulses, nonpulsatile (basal) secretion, and elimination kinetics; 2) to evaluate regulation of the axis as a whole; and 3) to reconstruct dose-response interactions without disrupting hormone connections. This review will focus on the motivations driving and the methodologies used for such analyses.