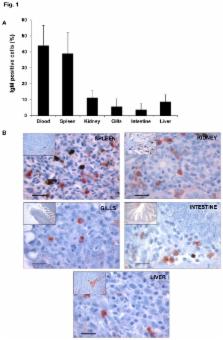 Two major classes of B lymphocytes have been described to date in rainbow trout: IgM + and IgT + cells. IgM + cells are mainly localized in the spleen, peripheral blood and kidney but are also found in other tissues. However, differences among IgM + cell populations attending to its location are poorly defined in fish. Thus, the aim of this work was to characterize the expression of different immune molecules such as chemokine receptors, Toll-like receptors (TLRs) and transcription factors on sorted IgM + lymphocytes from different rainbow trout tissues. IgM + populations from blood, spleen, kidney, gills, intestine and liver were isolated by cell sorting and the constitutive levels of transcription of these genes evaluated by real-time PCR. To further characterize B cells, we identified an MS4A sequence. In humans, the MS4A family includes several genes with immune functions, such as the B cell marker CD20 or FcRβ. Subsequently, we have also evaluated the mRNA levels of this MS4A gene in the different IgM + populations. The relevant differences in transcriptional patterns observed for each of these IgM + populations analyzed, point to the presence of functionally different tissue-specific B cell populations in rainbow trout. The data shown provides a pattern of genes transcribed in IgM + B cells not previously revealed in teleost fish. Furthermore, the constitutive expression of all the TLR genes analyzed in IgM + cells suggests an important role for these cells in innate immunity.

A new mathematical model for relative quantification in real-time RT-PCR.

M. Pfaffl (2001)
Use of the real-time polymerase chain reaction (PCR) to amplify cDNA products reverse transcribed from mRNA is on the way to becoming a routine tool in molecular biology to study low abundance gene expression. Real-time PCR is easy to perform, provides the necessary accuracy and produces reliable as well as rapid quantification results. But accurate quantification of nucleic acids requires a reproducible methodology and an adequate mathematical model for data analysis. This study enters into the particular topics of the relative quantification in real-time RT-PCR of a target gene transcript in comparison to a reference gene transcript. Therefore, a new mathematical model is presented. The relative expression ratio is calculated only from the real-time PCR efficiencies and the crossing point deviation of an unknown sample versus a control. This model needs no calibration curve. Control levels were included in the model to standardise each reaction run with respect to RNA integrity, sample loading and inter-PCR variations. High accuracy and reproducibility (<2.5% variation) were reached in LightCycler PCR using the established mathematical model.

The evolution of vertebrate Toll-like receptors.

Rebecca L. Hood,  Jeffrey Smith,  Lee Rowen … (2005)
The complete sequences of Takifugu Toll-like receptor (TLR) loci and gene predictions from many draft genomes enable comprehensive molecular phylogenetic analysis. Strong selective pressure for recognition of and response to pathogen-associated molecular patterns has maintained a largely unchanging TLR recognition in all vertebrates. There are six major families of vertebrate TLRs. This repertoire is distinct from that of invertebrates. TLRs within a family recognize a general class of pathogen-associated molecular patterns. Most vertebrates have exactly one gene ortholog for each TLR family. The family including TLR1 has more species-specific adaptations than other families. A major family including TLR11 is represented in humans only by a pseudogene. Coincidental evolution plays a minor role in TLR evolution. The sequencing phase of this study produced finished genomic sequences for the 12 Takifugu rubripes TLRs. In addition, we have produced >70 gene models, including sequences from the opossum, chicken, frog, dog, sea urchin, and sea squirt.

This work was supported by the Starting Grant 2011 (Project No.: 280469) from the European Research Council. The funders had no role in study design, data collection and analysis, decision to publish, or preparation of the manuscript.