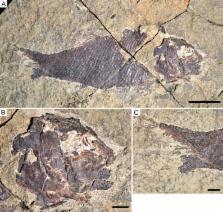 The new neopterygian genus Ticinolepis, including two new species T. longaeva and T. crassidens is described from Middle Triassic carbonate platform deposits of the Monte San Giorgio. The anatomy of this fish shows a mosaic of halecomorph and ginglymodian characters and, thus, the new taxon probably represents a basal holostean. During the latest Anisian to earliest Ladinian the two new species coexisted in the intraplatform basin represented by the uppermost Besano Formation, but only T. longaeva sp. nov. inhabited the more restricted basin represented by the Ladinian Meride Limestone (except for the Kalkschieferzone). The more widely distributed type species shows interesting patterns of intraspecific variation including ontogenetic changes and morphological variation over time. The second species presents anatomical features that strongly indicate a strictly durophagous diet. The different distribution of the species is interpreted as a result of habitat partitioning and different adaptability to palaeoenvironmental changes.

On the origin of species by sympatric speciation.

U Dieckmann,  M Doebeli (1999)
Understanding speciation is a fundamental biological problem. It is believed that many species originated through allopatric divergence, where new species arise from geographically isolated populations of the same ancestral species. In contrast, the possibility of sympatric speciation (in which new species arise without geographical isolation) has often been dismissed, partly because of theoretical difficulties. Most previous models analysing sympatric speciation concentrated on particular aspects of the problem while neglecting others. Here we present a model that integrates a novel combination of different features and show that sympatric speciation is a likely outcome of competition for resources. We use multilocus genetics to describe sexual reproduction in an individual-based model, and we consider the evolution of assortative mating (where individuals mate preferentially with like individuals) depending either on an ecological character affecting resource use or on a selectively neutral marker trait. In both cases, evolution of assortative mating often leads to reproductive isolation between ecologically diverging subpopulations. When assortative mating depends on a marker trait, and is therefore not directly linked to resource competition, speciation occurs when genetic drift breaks the linkage equilibrium between the marker and the ecological trait. Our theory conforms well with mounting empirical evidence for the sympatric origin of many species.

Resolution of ray-finned fish phylogeny and timing of diversification.

George W Smith,  Alex Dornburg,  Thomas J. Near … (2012)
Ray-finned fishes make up half of all living vertebrate species. Nearly all ray-finned fishes are teleosts, which include most commercially important fish species, several model organisms for genomics and developmental biology, and the dominant component of marine and freshwater vertebrate faunas. Despite the economic and scientific importance of ray-finned fishes, the lack of a single comprehensive phylogeny with corresponding divergence-time estimates has limited our understanding of the evolution and diversification of this radiation. Our analyses, which use multiple nuclear gene sequences in conjunction with 36 fossil age constraints, result in a well-supported phylogeny of all major ray-finned fish lineages and molecular age estimates that are generally consistent with the fossil record. This phylogeny informs three long-standing problems: specifically identifying elopomorphs (eels and tarpons) as the sister lineage of all other teleosts, providing a unique hypothesis on the radiation of early euteleosts, and offering a promising strategy for resolution of the "bush at the top of the tree" that includes percomorphs and other spiny-finned teleosts. Contrasting our divergence time estimates with studies using a single nuclear gene or whole mitochondrial genomes, we find that the former underestimates ages of the oldest ray-finned fish divergences, but the latter dramatically overestimates ages for derived teleost lineages. Our time-calibrated phylogeny reveals that much of the diversification leading to extant groups of teleosts occurred between the late Mesozoic and early Cenozoic, identifying this period as the "Second Age of Fishes."

Marta Barluenga,  Walter Salzburger,  Kai N Stölting … (2006)
Sympatric speciation, the formation of species in the absence of geographical barriers, remains one of the most contentious concepts in evolutionary biology. Although speciation under sympatric conditions seems theoretically possible, empirical studies are scarce and only a few credible examples of sympatric speciation exist. Here we present a convincing case of sympatric speciation in the Midas cichlid species complex (Amphilophus sp.) in a young and small volcanic crater lake in Nicaragua. Our study includes phylogeographic, population-genetic (based on mitochondrial DNA, microsatellites and amplified fragment length polymorphisms), morphometric and ecological analyses. We find, first, that crater Lake Apoyo was seeded only once by the ancestral high-bodied benthic species Amphilophus citrinellus, the most common cichlid species in the area; second, that a new elongated limnetic species (Amphilophus zaliosus) evolved in Lake Apoyo from the ancestral species (A. citrinellus) within less than approximately 10,000 yr; third, that the two species in Lake Apoyo are reproductively isolated; and fourth, that the two species are eco-morphologically distinct.

Funded by: German Research Foundation
Award ID: DFG LO 1405/3-1 to 3-3
Funded by: Museo Cantonale di Storia Naturale
Funded by: Max Kuhn
The work of ALA was financed by the German Research Foundation (DFG LO 1405/3-1 to 3-3), the Canton Ticino through the Museo Cantonale di Storia Naturale (Lugano) and Max Kuhn (Uster). The funders had no role in study design, data collection and analysis, decision to publish, or preparation of the manuscript.