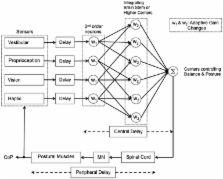 Maintaining equilibrium is basically a sensorimotor integration task. The central nervous system (CNS) continually and selectively weights and rapidly integrates sensory inputs from multiple sources, and coordinates multiple outputs. The weighting process is based on the availability and accuracy of afferent signals at a given instant, on the time-period required to process each input, and possibly on the plasticity of the relevant pathways. The likelihood that sensory inflow changes while balancing under static or dynamic conditions is high, because subjects can pass from a dark to a well-lit environment or from a tactile-guided stabilization to loss of haptic inflow. This review article presents recent data on the temporal events accompanying sensory transition, on which basic information is fragmentary. The processing time from sensory shift to reaching a new steady state includes the time to (a) subtract or integrate sensory inputs; (b) move from allocentric to egocentric reference or vice versa; and (c) adjust the calibration of motor activity in time and amplitude to the new sensory set. We present examples of processes of integration of posture-stabilizing information, and of the respective sensorimotor time-intervals while allowing or occluding vision or adding or subtracting tactile information. These intervals are short, in the order of 1–2 s for different postural conditions, modalities and deliberate or passive shift. They are just longer for haptic than visual shift, just shorter on withdrawal than on addition of stabilizing input, and on deliberate than unexpected mode. The delays are the shortest (for haptic shift) in blind subjects. Since automatic balance stabilization may be vulnerable to sensory-integration delays and to interference from concurrent cognitive tasks in patients with sensorimotor problems, insight into the processing time for balance control represents a critical step in the design of new balance- and locomotion training devices.

Joseph E. O’Doherty, Mikhail Lebedev, Peter J. Ifft … (2011)
Brain-machine interfaces (BMIs) 1,2 use neuronal activity recorded from the brain to establish direct communication with external actuators, such as prosthetic arms. While BMIs aim to restore the normal sensorimotor functions of the limbs, so far they have lacked tactile sensation. Here we demonstrate the operation of a brain-machine-brain interface (BMBI) that both controls the exploratory reaching movements of an actuator and enables the signalling of artificial tactile feedback through intracortical microstimulation (ICMS) of the primary somatosensory cortex (S1). Monkeys performed an active-exploration task in which an actuator (a computer cursor or a virtual-reality hand) was moved using a BMBI that derived motor commands from neuronal ensemble activity recorded in primary motor cortex (M1). ICMS feedback occurred whenever the actuator touched virtual objects. Temporal patterns of ICMS encoded the artificial tactile properties of each object. Neuronal recordings and ICMS epochs were temporally multiplexed to avoid interference. Two monkeys operated this BMBI to search and discriminate one out of three visually undistinguishable objects, using the virtual hand to identify the unique artificial texture (AT) associated with each. These results suggest that clinical motor neuroprostheses might benefit from the addition of ICMS feedback to generate artificial somatic perceptions associated with mechanical, robotic, or even virtual prostheses.

This article was submitted to the journal Frontiers in Systems Neuroscience.