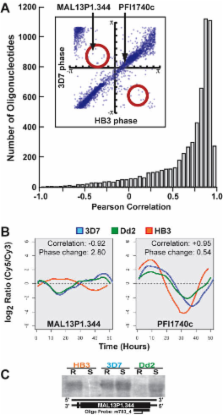 Gene expression patterns have been demonstrated to be highly variable between similar cell types, for example lab strains and wild strains of Saccharomyces cerevisiae cultured under identical growth conditions exhibit a wide range of expression differences. We have used a genome-wide approach to characterize transcriptional differences between strains of Plasmodium falciparum by characterizing the transcriptome of the 48 h intraerythrocytic developmental cycle (IDC) for two strains, 3D7 and Dd2 and compared these results to our prior work using the HB3 strain. These three strains originate from geographically diverse locations and possess distinct drug sensitivity phenotypes. Our goal was to identify transcriptional differences related to phenotypic properties of these strains including immune evasion and drug sensitivity. We find that the highly streamlined transcriptome is remarkably well conserved among all three strains, and differences in gene expression occur mainly in genes coding for surface antigens involved in parasite–host interactions. Our analysis also detects several transcripts that are unique to individual strains as well as identifying large chromosomal deletions and highly polymorphic regions across strains. The majority of these genes are uncharacterized and have no homology to other species. These tractable transcriptional differences provide important phenotypes for these otherwise highly related strains of Plasmodium.

Rachel Brem, Gaël Yvert, Rebecca Clinton … (2002)
To begin to understand the genetic architecture of natural variation in gene expression, we carried out genetic linkage analysis of genomewide expression patterns in a cross between a laboratory strain and a wild strain of Saccharomyces cerevisiae. Over 1500 genes were differentially expressed between the parent strains. Expression levels of 570 genes were linked to one or more different loci, with most expression levels showing complex inheritance patterns. The loci detected by linkage fell largely into two categories: cis-acting modulators of single genes and trans-acting modulators of many genes. We found eight such trans-acting loci, each affecting the expression of a group of 7 to 94 genes of related function.

Discovery of gene function by expression profiling of the malaria parasite life cycle.

Karine G Le Roch, Yingyao Zhou, Peter Blair … (2003)
The completion of the genome sequence for Plasmodium falciparum, the species responsible for most malaria human deaths, has the potential to reveal hundreds of new drug targets and proteins involved in pathogenesis. However, only approximately 35% of the genes code for proteins with an identifiable function. The absence of routine genetic tools for studying Plasmodium parasites suggests that this number is unlikely to change quickly if conventional serial methods are used to characterize encoded proteins. Here, we use a high-density oligonucleotide array to generate expression profiles of human and mosquito stages of the malaria parasite's life cycle. Genes with highly correlated levels and temporal patterns of expression were often involved in similar functions or cellular processes.

The online version of this article has been published under an open access model. Users are entitled to use, reproduce, disseminate, or display the open access version of this article for non-commercial purposes provided that: the original authorship is properly and fully attributed; the Journal and Oxford University Press are attributed as the original place of publication with the correct citation details given; if an article is subsequently reproduced or disseminated not in its entirety but only in part or as a derivative work this must be clearly indicated. For commercial re-use, please contact journals.permissions@ 123456oxfordjournals.org