The diversity and impact of hookworm infections in wildlife 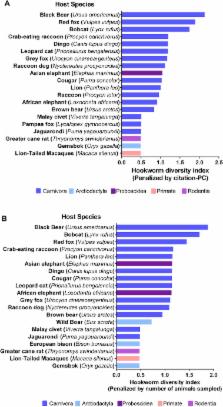 Hookworms are blood-feeding nematodes that parasitize the alimentary system of mammals. Despite their high pathogenic potential, little is known about their diversity and impact in wildlife populations. We conducted a systematic review of the literature on hookworm infections of wildlife and analyzed 218 studies qualitative and quantitatively. At least 68 hookworm species have been described in 9 orders, 24 families, and 111 species of wild mammals. Black bears, red foxes, and bobcats harbored the highest diversity of hookworm species and Ancylostoma pluridentatum, A. tubaeforme, Uncinaria stenocephala and Necator americanus were the hookworm species with the highest host diversity index. Hookworm infections cause anemia, retarded growth, tissue damage, inflammation and significant mortality in several wildlife species. Anemia has been documented more commonly in canids, felids and otariids, and retarded growth only in otariids. Population- level mortality has been documented through controlled studies only in canines and eared seals although sporadic mortality has been noticed in felines, bears and elephants. The main driver of hookworm pathogenic effects was the hookworm biomass in a population, measured as prevalence, mean burden and hookworm size (length). Many studies recorded significant differences in prevalence and mean intensity among regions related to contrasts in local humidity, temperature, and host population density. These findings, plus the ability of hookworms to perpetuate in different host species, create a dynamic scenario where changes in climate and the domestic animal-human-wildlife interface will potentially affect the dynamics and consequences of hookworm infections in wildlife. 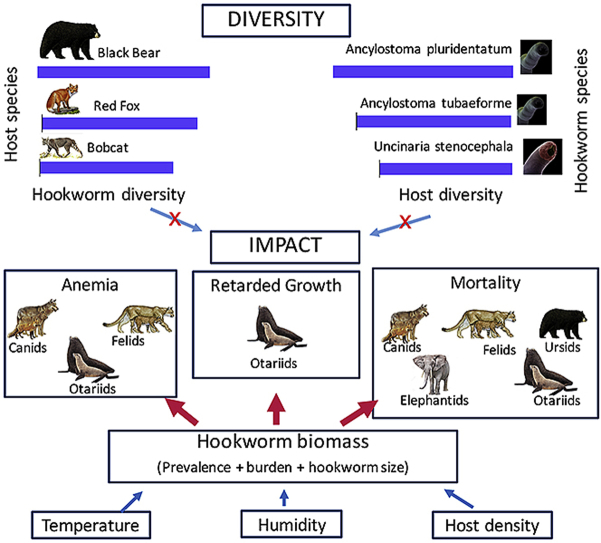 Menna Jones,  Sonia Altizer,  Charles Nunn … (2003)
Some hosts harbor diverse parasite communities, whereas others are relatively parasite free. Many factors have been proposed to account for patterns of parasite species richness, but few studies have investigated competing hypotheses among multiple parasite communities in the same host clade. We used a comparative data set of 941 host-parasite combinations, representing 101 anthropoid primate species and 231 parasite taxa, to test the relative importance of four sets of variables that have been proposed as determinants of parasite community diversity in primates: host body mass and life history, social contact and population density, diet, and habitat diversity. We defined parasites broadly to include not only parasitic helminths and arthropods but also viruses, bacteria, fungi, and protozoa, and we controlled for effects of uneven sampling effort on per-host measures of parasite diversity. In nonphylogenetic tests, body mass was correlated with total parasite diversity and the diversity of helminths and viruses. When phylogeny was taken into account, however, body mass became nonsignificant. Host population density, a key determinant of parasite spread in many epidemiological models, was associated consistently with total parasite species richness and the diversity of helminths, protozoa, and viruses tested separately. Geographic range size and day range length explained significant variation in the diversity of viruses.

Pet roundworms and hookworms: A continuing need for global worming

Donato Traversa (2012)
Ascarids and ancylostomatids are the most important parasites affecting dogs and cats worldwide, in terms of diffusion and risk for animal and human health. Different misconceptions have led the general public and pet owners to minimize the importance of these intestinal worms. A low grade of interest is also registered among veterinary professions, although there is a significant merit in keeping our guard up against these parasites. This article reviews current knowledge of ascarids and ancylostomatids, with a special focus on pathogenicity, epidemiology and control methods in veterinary and human medicine.