All in the Family: How the APPs Regulate Neurogenesis 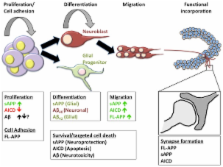 Recent intriguing evidence suggests that metabolites of amyloid precursor protein (APP), mutated in familial forms of Alzheimer’s disease (AD), play critical roles in developmental and postnatal neurogenesis. Of note is soluble APPα (sAPPα) that regulates neural progenitor cell proliferation. The APP family encompasses a group of ubiquitously expressed and evolutionarily conserved, type I transmembrane glycoproteins, whose functions have yet to be fully elucidated. APP can undergo proteolytic cleavage by mutually exclusive pathways. The subtle structural differences between metabolites generated in the different pathways, as well as their equilibrium, may be crucial for neuronal function. The implications of this new body of evidence are significant. Miscleavage of APP would readily impact developmental and postnatal neurogenesis, which might contribute to cognitive deficits characterizing Alzheimer’s disease. This review will discuss the implications of the role of the APP family in neurogenesis for neuronal development, cognitive function, and brain disorders that compromise learning and memory, such as AD.

Neurogenesis in the adult human hippocampus.

Peter Eriksson,  Ekaterina Perfilieva,  Thomas Björk-Eriksson … (1998)
The genesis of new cells, including neurons, in the adult human brain has not yet been demonstrated. This study was undertaken to investigate whether neurogenesis occurs in the adult human brain, in regions previously identified as neurogenic in adult rodents and monkeys. Human brain tissue was obtained postmortem from patients who had been treated with the thymidine analog, bromodeoxyuridine (BrdU), that labels DNA during the S phase. Using immunofluorescent labeling for BrdU and for one of the neuronal markers, NeuN, calbindin or neuron specific enolase (NSE), we demonstrate that new neurons, as defined by these markers, are generated from dividing progenitor cells in the dentate gyrus of adult humans. Our results further indicate that the human hippocampus retains its ability to generate neurons throughout life.

Brian F Gage (2000)
Neural stem cells exist not only in the developing mammalian nervous system but also in the adult nervous system of all mammalian organisms, including humans. Neural stem cells can also be derived from more primitive embryonic stem cells. The location of the adult stem cells and the brain regions to which their progeny migrate in order to differentiate remain unresolved, although the number of viable locations is limited in the adult. The mechanisms that regulate endogenous stem cells are poorly understood. Potential uses of stem cells in repair include transplantation to repair missing cells and the activation of endogenous cells to provide "self-repair. " Before the full potential of neural stem cells can be realized, we need to learn what controls their proliferation, as well as the various pathways of differentiation available to their daughter cells.

Dennis Selkoe (2001)
Rapid progress in deciphering the biological mechanism of Alzheimer's disease (AD) has arisen from the application of molecular and cell biology to this complex disorder of the limbic and association cortices. In turn, new insights into fundamental aspects of protein biology have resulted from research on the disease. This beneficial interplay between basic and applied cell biology is well illustrated by advances in understanding the genotype-to-phenotype relationships of familial Alzheimer's disease. All four genes definitively linked to inherited forms of the disease to date have been shown to increase the production and/or deposition of amyloid beta-protein in the brain. In particular, evidence that the presenilin proteins, mutations in which cause the most aggressive form of inherited AD, lead to altered intramembranous cleavage of the beta-amyloid precursor protein by the protease called gamma-secretase has spurred progress toward novel therapeutics. The finding that presenilin itself may be the long-sought gamma-secretase, coupled with the recent identification of beta-secretase, has provided discrete biochemical targets for drug screening and development. Alternate and novel strategies for inhibiting the early mechanism of the disease are also emerging. The progress reviewed here, coupled with better ability to diagnose the disease early, bode well for the successful development of therapeutic and preventative drugs for this major public health problem.

1simpleDepartment of Anatomy and Cell Biology, College of Medicine, The University of Illinois at Chicago Chicago, IL, USA