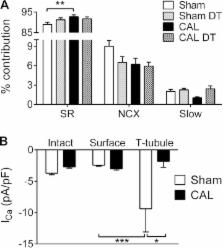 Na/Ca exchange (NCX) is normally located predominantly in the T tubules of cardiac ventricular myocytes. However, redistribution of NCX occurs in myocytes from failing hearts, resulting in more uniform distribution between T tubule and surface sarcolemma; this alters access of NCX to Ca released from sarcoplasmic reticulum and thus cellular Ca handling.

In mammalian cardiac ventricular myocytes, Ca efflux via Na/Ca exchange (NCX) occurs predominantly at T tubules. Heart failure is associated with disrupted t-tubular structure, but its effect on t-tubular function is less clear. We therefore investigated t-tubular NCX activity in ventricular myocytes isolated from rat hearts ∼18 wk after coronary artery ligation (CAL) or corresponding sham operation (Sham). NCX current ( I NCX) and l-type Ca current ( I Ca) were recorded using the whole cell, voltage-clamp technique in intact and detubulated (DT) myocytes; intracellular free Ca concentration ([Ca] i) was monitored simultaneously using fluo-4. I NCX was activated and measured during application of caffeine to release Ca from sarcoplasmic reticulum (SR). Whole cell I NCX was not significantly different in Sham and CAL myocytes and occurred predominantly in the T tubules in Sham myocytes. CAL was associated with redistribution of I NCX and I Ca away from the T tubules to the cell surface and an increase in t-tubular I NCX/ I Ca density from 0.12 in Sham to 0.30 in CAL myocytes. The decrease in t-tubular I NCX in CAL myocytes was accompanied by an increase in the fraction of Ca sequestered by SR. However, SR Ca content was not significantly different in Sham, Sham DT, and CAL myocytes but was significantly increased by DT of CAL myocytes. In Sham myocytes, there was hysteresis between I NCX and [Ca] i, which was absent in DT Sham but present in CAL and DT CAL myocytes. These data suggest altered distribution of NCX in CAL myocytes.

Alexey Moshkov,  Michael Lyon,  Yuri E Korchev … (2010)
The beta1- and beta2-adrenergic receptors (betaARs) on the surface of cardiomyocytes mediate distinct effects on cardiac function and the development of heart failure by regulating production of the second messenger cyclic adenosine monophosphate (cAMP). The spatial localization in cardiomyocytes of these betaARs, which are coupled to heterotrimeric guanine nucleotide-binding proteins (G proteins), and the functional implications of their localization have been unclear. We combined nanoscale live-cell scanning ion conductance and fluorescence resonance energy transfer microscopy techniques and found that, in cardiomyocytes from healthy adult rats and mice, spatially confined beta2AR-induced cAMP signals are localized exclusively to the deep transverse tubules, whereas functional beta1ARs are distributed across the entire cell surface. In cardiomyocytes derived from a rat model of chronic heart failure, beta2ARs were redistributed from the transverse tubules to the cell crest, which led to diffuse receptor-mediated cAMP signaling. Thus, the redistribution of beta(2)ARs in heart failure changes compartmentation of cAMP and might contribute to the failing myocardial phenotype.

Loss of T-tubules and other changes to surface topography in ventricular myocytes from failing human and rat heart.

Yanjun Zhang,  Gaelle Kikonda-Kanda,  Calum Lyon … (2009)
T-tubular invaginations of the sarcolemma of ventricular cardiomyocytes contain junctional structures functionally coupling L-type calcium channels to the sarcoplasmic reticulum calcium-release channels (the ryanodine receptors), and therefore their configuration controls the gain of calcium-induced calcium release (CICR). Studies primarily in rodent myocardium have shown the importance of T-tubular structures for calcium transient kinetics and have linked T-tubule disruption to delayed CICR. However, there is disagreement as to the nature of T-tubule changes in human heart failure. We studied isolated ventricular myocytes from patients with ischemic heart disease, idiopathic dilated cardiomyopathy, and hypertrophic obstructive cardiomyopathy and determined T-tubule structure with either the fluorescent membrane dye di-8-ANNEPs or the scanning ion conductance microscope (SICM). The SICM uses a scanning pipette to produce a topographic representation of the surface of the live cell by a non-optical method. We have also compared ventricular myocytes from a rat model of chronic heart failure after myocardial infarction. T-tubule loss, shown by both ANNEPs staining and SICM imaging, was pronounced in human myocytes from all etiologies of disease. SICM imaging showed additional changes in surface structure, with flattening and loss of Z-groove definition common to all etiologies. Rat myocytes from the chronic heart failure model also showed both T-tubule and Z-groove loss, as well as increased spark frequency and greater spark amplitude. This study confirms the loss of T-tubules as part of the phenotypic change in the failing human myocyte, but it also shows that this is part of a wider spectrum of alterations in surface morphology.

Return to the fetal gene program protects the stressed heart: a strong hypothesis.

Peter Razeghi,  Heinrich Taegtmeyer,  Mitra Rajabi … (2007)
A common feature of the hemodynamically or metabolically stressed heart is the return to a pattern of fetal metabolism. A hallmark of fetal metabolism is the predominance of carbohydrates as substrates for energy provision in a relatively hypoxic environment. When the normal heart is exposed to an oxygen rich environment after birth, energy substrate metabolism is rapidly switched to oxidation of fatty acids. This switch goes along with the expression of "adult" isoforms of metabolic enzymes and other proteins. However, the heart retains the ability to return to the "fetal" gene program. Specifically, the fetal gene program is predominant in a variety of pathophysiologic conditions including hypoxia, ischemia, hypertrophy, and atrophy. A common feature of all of these conditions is extensive remodeling, a decrease in the rate of aerobic metabolism in the cardiomyocyte, and an increase in cardiac efficiency. The adaptation is associated with a whole program of cell survival under stress. The adaptive mechanisms are prominently developed in hibernating myocardium, but they are also a feature of the failing heart muscle. We propose that in failing heart muscle at a certain point the fetal gene program is no longer sufficient to support cardiac structure and function. The exact mechanisms underlying the transition from adaptation to cardiomyocyte dysfunction are still not completely understood.