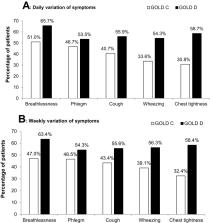 This study was performed to assess symptom variability and its impact on morning activities in stable patients with severe COPD in the Middle East and Africa (MEA) countries.

Non-interventional, cross-sectional study (NCT03425760) in patients with severe COPD (GOLD 2015, C, or D categories). Symptom variability was assessed directly by interviewing the patient and using the Global Chest Symptoms Questionnaire (GCSQ). The impact on morning activities was assessed using the Capacity of Daily Living during the Morning (CDLM) and the Morning Activities and Symptoms Questionnaire (MASQ).

A total of 3253 patients (mean±SD age: 64.1±9.5 years, 90.3% males) were enrolled. Overall, 81.6% and 83.4% of patients reported weekly and daily symptom variability, respectively. The number of exacerbations in the previous year, smoking cessation, and COPD GOLD D were the most consistent factors associated with symptom variability. The GCSQ score was significantly higher (p<0.001) in GOLD D than in GOLD C patients at each time during the day. In GOLD D, the mean (±SD) GCSQ score was higher at night (1.6±1.2, p<0.001) and in the morning (1.5±1.0, p<0.001) than in the afternoon (1.3±0.9), suggesting daytime variability of breathlessness and chest tightness. Overall, 60.0% of GOLD D patients (versus 13.6% GOLD C, p<0.0001) had difficulty getting out of bed due to COPD. Patients with symptom variability had significantly more difficulty to get out of bed, especially patients with chest tightness variability (p<0.0001) and wheezing variability (p<0.0001). The CDLM global score was significantly lower (p<0.0001) in GOLD D than in GOLD C patients (3.5±1.1 and 4.6 ± 3.5, respectively). Daily variability in chest tightness and wheezing was also significantly associated with CDLM scores (p<0.0001).

Patient insight into the impact of chronic obstructive pulmonary disease in the morning: an internet survey.

Niklas Karlsson,  Benjamin Partridge,  I Small (2009)
To determine diurnal variability of symptoms in chronic obstructive pulmonary disease (COPD) and to assess the impact of COPD upon patients' morning activities and routines. Quantitative internet interviews with 803 COPD patients from Europe and the USA, including 289 patients with severe COPD. Severe COPD was defined according to regular use of COPD medication, third level of breathlessness or above using the modified Medical Research Council (MRC) dyspnoea scale (MRC dyspnoea score > or =3) and one or more COPD exacerbations in the preceding 12 months. Morning was the worst time of day for COPD symptoms, particularly in patients with severe COPD (reported by 46% of severe patients). In these patients, shortness of breath was the most frequently reported symptom, correlating strongly with problems experienced with morning activities. Morning activities most affected by COPD were walking up and down stairs, putting on shoes and socks, making the bed, dressing, showering or bathing and drying. The majority of patients were not taking their medication in time for it to exert its optimal effect. Many patients consider the impact of COPD on morning activities to be substantial. Physicians should question patients about morning activities to assess disease impact and to advise regarding the optimal time to use therapy. This was an internet-based questionnaire survey and possible bias in patient selection and self-reported diagnosis of COPD and its severity should be taken into account.

Observational study to characterise 24-hour COPD symptoms and their relationship with patient-reported outcomes: results from the ASSESS study

Marc Miravitlles,  Heinrich Worth,  Juan Soler-Cataluna … (2014)
Background Few studies have investigated the 24-hour symptom profile in patients with COPD or how symptoms during the 24-hour day are inter-related. This observational study assessed the prevalence, severity and relationship between night-time, early morning and daytime COPD symptoms and explored the relationship between 24-hour symptoms and other patient-reported outcomes. Methods The study enrolled patients with stable COPD in clinical practice. Baseline night-time, early morning and daytime symptoms (symptom questionnaire), severity of airflow obstruction (FEV1), dyspnoea (modified Medical Research Council Dyspnoea Scale), health status (COPD Assessment Test), anxiety and depression levels (Hospital Anxiety and Depression Scale), sleep quality (COPD and Asthma Sleep Impact Scale) and physical activity level (sedentary, moderately active or active) were recorded. Results The full analysis set included 727 patients: 65.8% male, mean ± standard deviation age 67.2 ± 8.8 years, % predicted FEV1 52.8 ± 20.5%. In each part of the 24-hour day, >60% of patients reported experiencing ≥1 symptom in the week before baseline. Symptoms were more common in the early morning and daytime versus night-time (81.4%, 82.7% and 63.0%, respectively). Symptom severity was comparable for each period assessed. Overall, in the week before baseline, 56.7% of patients had symptoms throughout the whole 24-hour day (3 parts of the day); 79.9% had symptoms in ≥2 parts of the 24-hour day. Symptoms during each part of the day were inter-related, irrespective of disease severity (all p < 0.001). Early morning and daytime symptoms were associated with the severity of airflow obstruction (p < 0.05 for both). Night-time, early morning and daytime symptoms were all associated with worse dyspnoea, health status and sleep quality, and higher anxiety and depression levels (all p < 0.001 versus patients without symptoms in each corresponding period). In each part of the 24-hour day, there was also an association between symptoms and a patient’s physical activity level (p < 0.05 for each period). Conclusions More than half of patients experienced COPD symptoms throughout the whole 24-hour day. There was a significant relationship between night-time, early morning and daytime symptoms. In each period, symptoms were associated with worse patient-reported outcomes, suggesting that improving 24-hour symptoms should be an important consideration in the management of COPD. Electronic supplementary material The online version of this article (doi:10.1186/s12931-014-0122-1) contains supplementary material, which is available to authorized users.