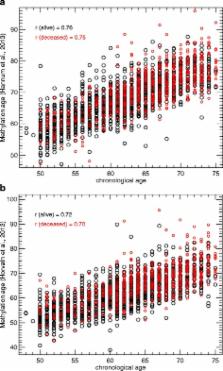 Previous studies have developed models predicting methylation age from DNA methylation in blood and other tissues (epigenetic clock) and suggested the difference between DNA methylation and chronological ages as a marker of healthy aging. The goal of this study was to confirm and expand such observations by investigating whether different concepts of the epigenetic clocks in a population-based cohort are associated with cancer, cardiovascular, and all-cause mortality.

These results show that age acceleration in terms of the difference between age predicted by DNA methylation and chronological age is an independent predictor of all-cause and cause-specific mortality and may be useful as a general marker of healthy aging.

Riccardo E Marioni, Sonia Shah, Allan McRae … (2015)
Background DNA methylation levels change with age. Recent studies have identified biomarkers of chronological age based on DNA methylation levels. It is not yet known whether DNA methylation age captures aspects of biological age. Results Here we test whether differences between people’s chronological ages and estimated ages, DNA methylation age, predict all-cause mortality in later life. The difference between DNA methylation age and chronological age (Δage) was calculated in four longitudinal cohorts of older people. Meta-analysis of proportional hazards models from the four cohorts was used to determine the association between Δage and mortality. A 5-year higher Δage is associated with a 21% higher mortality risk, adjusting for age and sex. After further adjustments for childhood IQ, education, social class, hypertension, diabetes, cardiovascular disease, and APOE e4 status, there is a 16% increased mortality risk for those with a 5-year higher Δage. A pedigree-based heritability analysis of Δage was conducted in a separate cohort. The heritability of Δage was 0.43. Conclusions DNA methylation-derived measures of accelerated aging are heritable traits that predict mortality independently of health status, lifestyle factors, and known genetic factors. Electronic supplementary material The online version of this article (doi:10.1186/s13059-015-0584-6) contains supplementary material, which is available to authorized users.

Riccardo E Marioni, Sonia Shah, Allan McRae … (2015)
Background: The DNA methylation-based ‘epigenetic clock’ correlates strongly with chronological age, but it is currently unclear what drives individual differences. We examine cross-sectional and longitudinal associations between the epigenetic clock and four mortality-linked markers of physical and mental fitness: lung function, walking speed, grip strength and cognitive ability. Methods: DNA methylation-based age acceleration (residuals of the epigenetic clock estimate regressed on chronological age) were estimated in the Lothian Birth Cohort 1936 at ages 70 (n = 920), 73 (n = 299) and 76 (n = 273) years. General cognitive ability, walking speed, lung function and grip strength were measured concurrently. Cross-sectional correlations between age acceleration and the fitness variables were calculated. Longitudinal change in the epigenetic clock estimates and the fitness variables were assessed via linear mixed models and latent growth curves. Epigenetic age acceleration at age 70 was used as a predictor of longitudinal change in fitness. Epigenome-wide association studies (EWASs) were conducted on the four fitness measures. Results: Cross-sectional correlations were significant between greater age acceleration and poorer performance on the lung function, cognition and grip strength measures (r range: −0.07 to −0.05, P range: 9.7 x 10−3 to 0.024). All of the fitness variables declined over time but age acceleration did not correlate with subsequent change over 6 years. There were no EWAS hits for the fitness traits. Conclusions: Markers of physical and mental fitness are associated with the epigenetic clock (lower abilities associated with age acceleration). However, age acceleration does not associate with decline in these measures, at least over a relatively short follow-up.

Accelerated epigenetic aging in Down syndrome

Steve Horvath, Paolo Garagnani, Maria Bacalini … (2015)
Down Syndrome (DS) entails an increased risk of many chronic diseases that are typically associated with older age. The clinical manifestations of accelerated aging suggest that trisomy 21 increases the biological age of tissues, but molecular evidence for this hypothesis has been sparse. Here, we utilize a quantitative molecular marker of aging (known as the epigenetic clock) to demonstrate that trisomy 21 significantly increases the age of blood and brain tissue (on average by 6.6 years, P = 7.0 × 10−14).