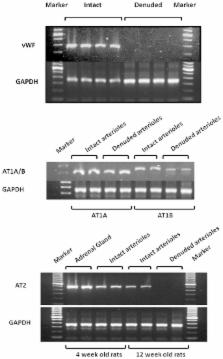 The present study examined whether 20-hydroxyeicosatetraenoic acid (HETE) contributes to the vasoconstrictor effect of angiotensin II (ANG II) in renal microvessels by preventing activation of the large conductance Ca 2+-activated K + channel (K Ca) in vascular smooth muscle (VSM) cells. ANG II increased the production of 20-HETE in rat renal microvessels. This response was attenuated by the 20-HETE synthesis inhibitors, 17-ODYA and HET0016, a phospholipase A 2 inhibitor AACOF 3, and the AT 1 receptor blocker, Losartan, but not by the AT 2 receptor blocker, PD123319. ANG II (10 -11 to 10 -6 M) dose-dependently decreased the diameter of renal microvessels by 41 ± 5%. This effect was blocked by 17-ODYA. ANG II (10 -7 M) did not alter K Ca channel activity recorded from cell-attached patches on renal VSM cells under control conditions. However, it did reduce the NPo of the K Ca channel by 93.4 ± 3.1% after the channels were activated by increasing intracellular calcium levels with ionomycin. The inhibitory effect of ANG II on K Ca channel activity in the presence of ionomycin was attenuated by 17-ODYA, AACOF 3, and the phospholipase C (PLC) inhibitor U-73122. ANG II induced a peak followed by a steady-state increase in intracellular calcium concentration in renal VSM cells. 17-ODYA (10 -5 M) had no effect on the peak response, but it blocked the steady-state increase. These results indicate that ANG II stimulates the formation of 20-HETE in rat renal microvessels via the AT 1 receptor activation and that 20-HETE contributes to the vasoconstrictor response to ANG II by blocking activation of K Ca channel and facilitating calcium entry.

H Iwao,  Seong Taeck Kim (2000)
A growing body of evidence supports the notion that angiotensin II (Ang II), the central product of the renin-angiotensin system, may play a central role not only in the etiology of hypertension but also in the pathophysiology of cardiovascular and renal diseases in humans. In this review, we focus on the role of Ang II in cardiovascular and renal diseases at the molecular and cellular levels and discuss up-to-date evidence concerning the in vitro and in vivo actions of Ang II and the pharmacological effects of angiotensin receptor antagonists in comparison with angiotensin-converting enzyme inhibitors. Ang II, via AT(1) receptor, directly causes cellular phenotypic changes and cell growth, regulates the gene expression of various bioactive substances (vasoactive hormones, growth factors, extracellular matrix components, cytokines, etc.), and activates multiple intracellular signaling cascades (mitogen-activated protein kinase cascades, tyrosine kinases, various transcription factors, etc.) in cardiac myocytes and fibroblasts, vascular endothelial and smooth muscle cells, and renal mesangial cells. These actions are supposed to participate in the pathophysiology of cardiac hypertrophy and remodeling, heart failure, vascular thickening, atherosclerosis, and glomerulosclerosis. Furthermore, in vivo recent evidence suggest that the activation of mitogen-activated protein kinases and activator protein-1 by Ang II may play the key role in cardiovascular and renal diseases. However, there are still unresolved questions and controversies on the mechanism of Ang II-mediated cardiovascular and renal diseases.

Hartland Jackson (1999)
Ion channels in the plasma membrane of vascular muscle cells that form the walls of resistance arteries and arterioles play a central role in the regulation of vascular tone. Current evidence indicates that vascular smooth muscle cells express at least 4 different types of K(+) channels, 1 to 2 types of voltage-gated Ca(2+) channels, >/=2 types of Cl(-) channels, store-operated Ca(+) (SOC) channels, and stretch-activated cation (SAC) channels in their plasma membranes, all of which may be involved in the regulation of vascular tone. Calcium influx through voltage-gated Ca(2+), SOC, and SAC channels provides a major source of activator Ca(2+) used by resistance arteries and arterioles. In addition, K(+) and Cl(-) channels and the Ca(2+) channels mentioned previously all are involved in the determination of the membrane potential of these cells. Membrane potential is a key variable that not only regulates Ca(+2) influx through voltage-gated Ca(2+) channels, but also influences release of Ca(2+) from internal stores and Ca(2+)- sensitivity of the contractile apparatus. By controlling Ca(2+) delivery and membrane potential, ion channels are involved in all aspects of the generation and regulation of vascular tone.

HET0016, a potent and selective inhibitor of 20-HETE synthesizing enzyme.

This work was funded in part by grants HL36279, HL29587 (RJR), RO1DK067299 (JZ) and HL089884 and HL107632 (SPD) from the National Institutes of Health. The funders had no role in study design, data collection and analysis, decision to publish, or preparation of the manuscript. No additional external funding received for this study.