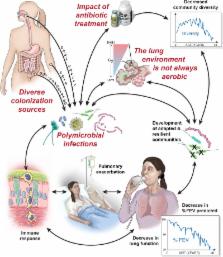 C Sibley, Michael Surette, Michael D Parkins … (2008)
Lung disease is the leading cause of morbidity and mortality in cystic fibrosis (CF) patients. A modest number of bacterial pathogens have been correlated with pulmonary function decline; however, microbiological and molecular evidence suggests that CF airway infection is polymicrobial. To obtain a more complete assessment of the microbial community composition and dynamics, we undertook a longitudinal study by using culture-independent and microbiological approaches. In the process, we demonstrated that within complex and dynamic communities, the Streptococcus milleri group (SMG) can establish chronic pulmonary infections and at the onset of 39% of acute pulmonary exacerbations, SMG is the numerically dominant pathogen. We report the comprehensive polymicrobial community dynamics of a CF lung infection in a clinically relevant context. If a given organism, such as Pseudomonas aeruginosa, becomes resistant to antibiotic therapy, an alternative treatment avenue may mediate the desired clinical response by effectively managing the composition of the microbial community.

Responses of Pseudomonas aeruginosa to low oxygen indicate that growth in the cystic fibrosis lung is by aerobic respiration.

Carolina Alvarez-Ortega, Caroline S. Harwood (2007)
Pseudomonas aeruginosa in the lungs of cystic fibrosis patients grows to high densities in mucopurulent material that is depleted in oxygen. Some have concluded that growth in these circumstances is dependent on anaerobic nitrate respiration. Here we present data in favour of the alternative hypothesis that microaerobic respiration is the predominant mode of P. aeruginosa growth in the cystic fibrosis lung. We found that P. aeruginosa strain PAO1 and a mucoid derivative of strain PAO1 each grew at dissolved oxygen concentrations of less than 3 microM. This is lower than the concentration of oxygen that has been measured in hypoxic cystic fibrosis mucous. A transcriptome analysis comparing cells grown under aerobic conditions (185 microM dissolved oxygen) with cells grown with 20 microM or 3 microM dissolved oxygen, or anaerobically with nitrate, revealed that overlapping sets of genes are expressed depending on oxygen availability. This suggests that P. aeruginosa responds to changes in oxygen concentration along a continuum rather than having a discrete low oxygen regulon. Any one of three high affinity terminal oxidases that P. aeruginosa encodes supported microaerobic growth. A triple mutant lacking all three of these oxidases failed to grow at low oxygen and formed abnormal biofilms.

This work was supported by NIH grant R01 2 R37 AI83256-06 to GAO and a Renal Function and Disease Training Grant fellowship (T32 DK007301) to LMF. The funders had no role in study design, data collection and analysis, decision to publish, or preparation of the manuscript.