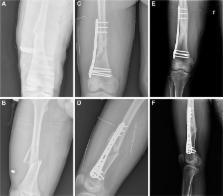 In comparison with closed fractures, open fractures have an increased risk of infection, there are soft tissue-related problems, and difficulties are experienced in union. The aim of this study was to evaluate and discuss the results of osteosynthesis applied with a noncontact plate in Gustilo–Anderson Type 2, 3a, and 3b fractures.

The study included 23 patients applied with debridement + noncontact plate osteosynthesis + soft tissue procedures in a single session for the treatment of an open fracture. A follow-up card was created to evaluate the patients in respect of age, gender, fracture level, fracture etiology, open fracture type, preoperative and postoperative sedimentation and C-reactive protein values, antibiotics used and duration of use, time to union, and complications.

In open fractures, noncontact plating following debridement seems to be a good alternative treatment method to intramedullar nailing, especially in metaphyseal and metaphyseo-diaphyseal fractures and in spiral oblique diafiz fractures. Noncontact plating may also be a good alternative to intramedullar nailing for open fracture treatment if the patients have additional pathologies such as contusion and thoracic injury.

Fix and flap: the radical orthopaedic and plastic treatment of severe open fractures of the tibia.

Subeer S. Majumder,  Alexander M R Smith,  Lance Batchelor … (2000)
We performed a retrospective review of the case notes of 84 consecutive patients who had suffered a severe (Gustilo IIIb or IIIc) open fracture of the tibia after blunt trauma between 1990 and 1998. All had been treated by a radical protocol which included early soft-tissue cover with a muscle flap by a combined orthopaedic and plastic surgery service. Our ideal management is a radical debridement of the wound outside the zone of injury, skeletal stabilisation and early soft-tissue cover with a vascularised muscle flap. All patients were followed clinically and radiologically to union or for one year. After exclusion of four patients (one unrelated death and three patients lost to follow-up), we reviewed 80 patients with 84 fractures. There were 67 men and 13 women with a mean age of 37 years (3 to 89). Five injuries were grade IIIc and 79 grade IIIb; 12 were site 41, 43 were site 42 and 29 were site 43. Debridement and stabilisation of the fracture were invariably performed immediately. In 33 cases the soft-tissue reconstruction was also completed in a single stage, while in a further 30 it was achieved within 72 hours. In the remaining 21 there was a delay beyond 72 hours, often for critical reasons unrelated to the limb injury. All grade-IIIc injuries underwent immediate vascular reconstruction, with an immediate cover by a flap in two. All were salvaged. There were four amputations, one early, one mid-term and two late, giving a final rate of limb salvage of 95%. Overall, nine pedicled and 75 free muscle flaps were used; the rate of flap failure was 3.5%. Stabilisation of the fracture was achieved with 19 external and 65 internal fixation devices (nails or plates). Three patients had significant segmental defects and required bone-transport procedures to achieve bony union. Of the rest, 51 fractures (66%) progressed to primary bony union while 26 (34%) required a bone-stimulating procedure to achieve this outcome. Overall, there was a rate of superficial infection of the skin graft of 6%, of deep infection at the site of the fracture of 9.5%, and of serious pin-track infection of 37% in the external fixator group. At final review all patients were walking freely on united fractures with no evidence of infection. The treatment of these very severe injuries by an aggressive combined orthopaedic and plastic surgical approach provides good results; immediate internal fixation and healthy soft-tissue cover with a muscle flap is safe. Indeed, delay in cover (>72 hours) was associated with most of the problems. External fixation was associated with practical difficulties for the plastic surgeons, a number of chronic pin-track infections and our only cases of malunion. We prefer to use internal fixation. We recommend primary referral to a specialist centre whenever possible. If local factors prevent this we suggest that after discussion with the relevant centre, initial debridement and bridging external fixation, followed by transfer, is the safest procedure.

A staged protocol for soft tissue management in the treatment of complex pilon fractures.

Tessa Sanders,  M Sirkin,  D Herscovici … (1999)
To determine whether open reduction and internal fixation of intra-articular pilon fractures using a staged treatment protocol results in minimal surgical wound complications. Retrospective. Level 1 trauma center. Between January 1991 and December 1996, 226 pilon fractures (AO types 43A-C) were treated, of which 108 were AO type 43C. Fifty-six fractures were included in a retrospective analysis of a treatment protocol. Injuries were divided into Group I, thirty-four closed fractures, and Group II, twenty-two open fractures (three Gustilo Type 1, six Type II, eight Type IIIA, and five Type IIIB). The protocol consisted of immediate (within twenty-four hours) open reduction and internal fixation of the fibula when fractured, using a one-third tubular or 3.5-millimeter dynamic compression plate and application of an external fixator spanning the ankle joint. Patients with isolated injuries were discharged after initial stabilization and readmitted for the definitive reconstruction. Polytrauma patients remained hospitalized and were observed. Formal open reconstruction of the articular surface by plating was performed when soft tissue swelling had subsided. Complications were defined as wound problems requiring hospitalization. All affected limbs were then evaluated via chart and radiograph review, patient interviews, and physical examination until surgical wound healing was complete, for a minimum of twelve months. Group 1 (closed pilon): Follow-up was possible in twenty-nine out of thirty fractures (97 percent). Average time from external fixation to open reduction was 12.7 days. All wounds healed. None exhibited wound dehiscence or full-thickness tissue necrosis requiring secondary soft tissue coverage postoperatively. Seventeen percent (five out of twenty-nine patients) had partial-thickness skin necrosis. All were treated with local wound care and oral antibiotics and healed uneventfully. There was one late complication (3.4 percent), a chronic draining sinus secondary to osteomyelitis, which resolved after fracture healing and metal removal. Group II (open pilon): Follow-up was possible in seventeen patients with nineteen fractures (86 percent). Average time from external fixation to formal reconstruction was fourteen days (range 4 to 31 days). By definition, all Gustilo Type IIIB fractures required flap coverage for the injury. Two patients experienced partial-thickness wound necrosis. These were treated with local wound care and antibiotics. All surgical wounds healed. There were two complications (10.5 percent), both deep infections. One Type I open fracture developed wound dehiscence and osteomyelitis requiring multiple debridements, intravenous antibiotics, subsequent removal of hardware, and re-application of an external fixator to cure the infection. One Type IIIA open fracture of the distal tibia and calcaneus developed osteomyelitis and required a below-knee amputation. Based on our data, it appears that the historically high rates of infection associated with open reduction and internal fixation of pilon fractures may be due to attempts at immediate fixation through swollen, compromised soft tissues. When a staged procedure is performed with initial restoration of fibula length and tibial external fixation, soft tissue stabilization is possible. Once soft tissue swelling has significantly diminished, anatomic reduction and internal fixation can then be performed semi-electively with only minimal wound problems. This is evidenced by the lack of skin grafts, rotation flaps, or free tissue transfers in our series. This technique appears to be effective in closed and open fractures alike.

Prevalence of complications of open tibial shaft fractures stratified as per the Gustilo-Anderson classification.

Costas Papakostidis,  Nikolaos Kanakaris,  Juan Pretel … (2011)
The aim of the present study was to comparatively analyse certain outcome measures of open tibial fractures, stratified per grade of open injury and method of treatment. For this purpose, a systematic review of the English literature from 1990 until 2010 was undertaken, comprising 32 eligible articles reporting on 3060 open tibial fractures. Outcome measures included rates of union progress (early union, delayed union, late union and non-union rates) and certain complication rates (deep infection, compartment syndrome and amputation rates). Statistical heterogeneity across component studies was detected with the use of Cochran chi-square and I(2) tests. In the absence of significant statistical heterogeneity a pooled estimate of effect size for each outcome/complication of interest was produced. All component studies were assigned on average a moderate quality score. Reamed tibial nails (RTNs) were associated with significantly higher odds of early union compared with unreamed tibial nails (UTNs) in IIIB open fractures (odds ratio: 12, 95% CI: 2.4-61). Comparing RTN and UTN modes of treatment, no significant differences were documented per grade of open fractures with respect to both delayed and late union rates. Surprisingly, nonunion rates in IIIB open fractures treated with either RTNs or UTNs were lower than IIIA or II open fractures, although the differences were not statistically significant. Significantly increased deep infection rates of IIIB open fractures compared with all other grades were documented for both modes of treatment (RTN, UTN). However, lower deep infection rates for IIIA open fractures treated with RTNs were recorded compared with grades I and II. Interestingly, grade II open tibial fractures, treated with UTN, presented significantly greater odds for developing compartment syndrome than when treated with RTNs. Our cumulative analysis, providing for each grade of open injury and each particular method of treatment a summarised estimate of effect size for the most important outcome measures of open tibial fractures, constitutes a useful tool of the practicing surgeon for optimal decision making when operative treatment of such fractures is contemplated. Copyright Â© 2011 Elsevier Ltd. All rights reserved.