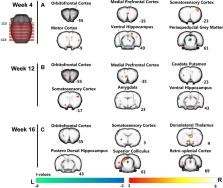 A total of 32 female rats were randomised into a normal group, model group, sham electroacupuncture group, and electroacupuncture group. A pain model was included via right BPAI. The electroacupuncture intervention at cervical “Jiaji” points (C5-7) was performed for 11 weeks. The mechanical withdrawal threshold of the non-injured (left) forepaw was measured at the baseline and on days 3, 7, 14, 21, 28, 56, 84, and 112 subsequent to BPAI. Positron emission tomography (PET) was applied to explore metabolic changes on days 28, 84, and 112.

Charles Meyer,  Dwayne Campbell (2006)
Neuropathic pain refers to pain that originates from pathology of the nervous system. Diabetes, infection (herpes zoster), nerve compression, nerve trauma, "channelopathies," and autoimmune disease are examples of diseases that may cause neuropathic pain. The development of both animal models and newer pharmacological strategies has led to an explosion of interest in the underlying mechanisms. Neuropathic pain reflects both peripheral and central sensitization mechanisms. Abnormal signals arise not only from injured axons but also from the intact nociceptors that share the innervation territory of the injured nerve. This review focuses on how both human studies and animal models are helping to elucidate the mechanisms underlying these surprisingly common disorders. The rapid gain in knowledge about abnormal signaling promises breakthroughs in the treatment of these often debilitating disorders.

Herta Flor,  Lone Nikolajsen,  Troels Staehelin Jensen (2006)
Phantom pain refers to pain in a body part that has been amputated or deafferented. It has often been viewed as a type of mental disorder or has been assumed to stem from pathological alterations in the region of the amputation stump. In the past decade, evidence has accumulated that phantom pain might be a phenomenon of the CNS that is related to plastic changes at several levels of the neuraxis and especially the cortex. Here, we discuss the evidence for putative pathophysiological mechanisms with an emphasis on central, and in particular cortical, changes. We cite both animal and human studies and derive suggestions for innovative interventions aimed at alleviating phantom pain.

U Bingel,  R Knab,  C Weiller … (2002)
Pain is processed in multiple cortical and subcortical brain areas. Subcortical structures are substantially involved in different processes that are closely linked to pain processing, e.g. motor preparation, autonomic responses, affective components and learning. However, it is unclear to which extent nociceptive information is relayed to and processed in subcortical structures. We used single-trial functional magnetic resonance imaging (fMRI) to identify subcortical regions displaying hemodynamic responses to painful stimulation. Thulium-YAG (yttrium-aluminum-granate) laser evoked pain stimuli, which have no concomitant tactile component, were applied to either hand of healthy volunteers in a randomized order. This procedure allowed identification of areas displaying differential fMRI responses to right- and left-sided stimuli. Hippocampal complex, amygdala, red nucleus, brainstem and cerebellum were activated in response to painful stimuli. Structures related to the affective processing of pain showed bilateral activation, whereas structures involved in the generation of withdrawal behavior, namely red nucleus, putamen and cerebellum displayed differential (i.e. asymmetric) responses according to the side of stimulation. This suggests that spatial information about the nociceptive stimulus is made available in these structures for the guidance of defensive and withdrawal behavior. Copyright 2002 International Association for the Study of Pain