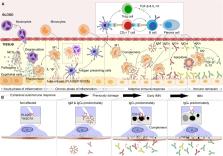 Idiopathic membranous nephropathy (IMN) is a pathological pattern of glomerular damage caused by an autoimmune response. Immune complex deposition, thickness of glomerular basement membrane, and changes in the podocyte morphology are responsible for the development of proteinuria, which is caused by the targeted binding of auto-antibodies to podocytes. Several auto-antigens have recently been identified in IMN, including M-type receptor for secretory phospholipase A2 (PLA2R1), thrombospondin type-1 domain-containing 7A (THSD7A), and neural epidermal growth factor-like 1 protein (NELL-1). The measurement of peripheral circulating antibodies has become an important clinical reference index. However, some clinical features of IMN remain elusive and need to be further investigated, such as the autoimmunity initiation, IgG4 predominance, spontaneous remission, and the unique glomerular lesion. As these unresolved issues are closely related to clinical practice, we have proposed a hypothetical pathogenesis model of IMN. Induced by environmental stimuli or other causes, the PLA2R1 antigen and/or THSD7A antigen exposed to extrarenal tissues, such as lungs, then produce the auto-antibodies that target and cause damage to the podocytes in circulation. In this review, we highlighted the potential association between environmental stimuli, immune activity, and glomerular lesions, the underlying basis for spontaneous immune and proteinuria remission.

Properties of mouse and human IgG receptors and their contribution to disease models.

Pierre Bruhns (2012)
Impressive advances in defining the properties of receptors for the Fc portion of immunoglobulins (FcR) have been made over the past several years. Ligand specificities were systematically analyzed for both human and mouse FcRs that revealed novel receptors for specific IgG subclasses. Expression patterns were redefined using novel specific anti-FcR mAbs that revealed major differences between human and mouse systems. The in vivo roles of IgG receptors have been addressed using specific FcR knockout mice or in mice expressing a single FcR, and have demonstrated a predominant contribution of mouse activating IgG receptors FcγRIII and FcγRIV to models of autoimmunity (eg, arthritis) and allergy (eg, anaphylaxis). Novel blocking mAbs specific for these activating IgG receptors have enabled, for the first time, the investigation of their roles in vivo in wild-type mice. In parallel, the in vivo properties of human FcRs have been reported using transgenic mice and models of inflammatory and allergic reactions, in particular those of human activating IgG receptor FcγRIIA (CD32A). Importantly, these studies led to the identification of specific cell populations responsible for the induction of various inflammatory diseases and have revealed, in particular, the unexpected contribution of neutrophils and monocytes to the induction of anaphylactic shock.

R Aalberse,  J Schuurman,  Steven O. Stapel … (2009)
Despite its well-known association with IgE-mediated allergy, IgG4 antibodies still have several poorly understood characteristics. IgG4 is a very dynamic antibody: the antibody is involved in a continuous process of half-molecules (i.e. a heavy and attached light-chain) exchange. This process, also referred to as 'Fab-arm exchange', results usually in asymmetric antibodies with two different antigen-combining sites. While these antibodies are hetero- bivalent, they will behave as monovalent antibodies in most situations. Another aspect of IgG4, still poorly understood, is its tendency to mimic IgG rheumatoid factor (RF) activity by interacting with IgG on a solid support. In contrast to conventional RF, which binds via its variable domains, the activity of IgG4 is located in its constant domains. This is potentially a source of false positives in IgG4 antibody assay results. Because regulation of IgG4 production is dependent on help by T-helper type 2 (Th2) cells, the IgG4 response is largely restricted to non-microbial antigens. This Th2-dependency associates the IgG4 and IgE responses. Another typical feature in the immune regulation of IgG4 is its tendency to appear only after prolonged immunization. In the context of IgE-mediated allergy, the appearance of IgG4 antibodies is usually associated with a decrease in symptoms. This is likely to be due, at least in part, to an allergen-blocking effect at the mast cell level and/or at the level of the antigen-presenting cell (preventing IgE-facilitated activation of T cells). In addition, the favourable association reflects the enhanced production of IL-10 and other anti-inflammatory cytokines, which drive the production of IgG4. While in general, IgG4 is being associated with non-activating characteristics, in some situations IgG4 antibodies have an association with pathology. Two striking examples are pemphigoid diseases and sclerosing diseases such as autoimmune pancreatitis. The mechanistic basis for the association of IgG4 with these diseases is still enigmatic. However, the association with sclerosing diseases may reflect an excessive production of anti-inflammatory cytokines triggering an overwhelming expansion of IgG4-producing plasma cells. The bottom line for allergy diagnosis: IgG4 by itself is unlikely to be a cause of allergic symptoms. In general, the presence of allergen-specific IgG4 indicates that anti-inflammatory, tolerance-inducing mechanisms have been activated. The existence of the IgG4 subclass, its up-regulation by anti-inflammatory factors and its own anti-inflammatory characteristics may help the immune system to dampen inappropriate inflammatory reactions.

Julia Hofstra,  Hanna Debiec,  Colin Short … (2012)
The phospholipase A(2) receptor (PLA(2)R) is the major target antigen in idiopathic membranous nephropathy. The technique for measuring antibodies against PLA(2)R and the relationship between antibody titer and clinical characteristics are not well established. Here, we measured anti-PLA(2)R (aPLA(2)R) antibody titer and subclass in a well defined cohort of 117 Caucasian patients with idiopathic membranous nephropathy and nephrotic-range proteinuria using both indirect immunofluorescence testing (IIFT) and ELISA. We assessed agreement between tests and correlated antibody titer with clinical baseline parameters and outcome. In this cohort, aPLA(2)R antibodies were positive in 74% and 72% of patients using IIFT and ELISA, respectively. Concordance between both tests was excellent (94% agreement, κ=0.85). Among 82 aPLA(2)R-positive patients, antibody titer significantly correlated with baseline proteinuria (P=0.02). Spontaneous remissions occurred significantly less frequently among patients with high antibody titers (38% versus 4% in the lowest and highest tertiles, respectively; P<0.01). IgG4 was the dominant subclass in the majority of patients. Titers of IgG4, but not IgG1 or IgG3, significantly correlated with the occurrence of spontaneous remission (P=0.03). In summary, these data show high agreement between IIFT and ELISA assessments of aPLA(2)R antibody titer and highlight the pathogenetic role of these antibodies, especially the IgG4 subclass, given the observed relationships between aPLA(2)R titer, baseline proteinuria, and outcome.

This article was submitted to Autoimmune and Autoinflammatory Disorders, a section of the journal Frontiers in Immunology