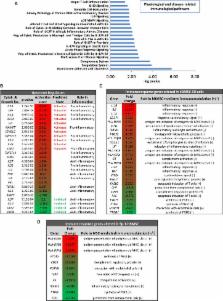 Because of their immunomodulatory properties, human bone marrow stromal cells (hBMSCs) represent promising stem cells for treatment of immune disorders. hBMSCs expansion precedes their clinical use, so the possibility that hBMSCs undergo spontaneous transformation upon long-term culture should be addressed. Whether hBMSCs retain immunosuppressive and anti-inflammatory properties upon oncogenic transformation remains unknown. Using sequentially mutated hBMSCs and spontaneously transformed hBMSCs, we report that, upon oncogenic transformation, hBMSCs lose immunosuppressive and anti-inflammatory properties in vitro and in vivo. Transcriptome profiling and functional assays reveal immune effectors underlying the loss of immunomodulation in transformed hBMSCs. They display a proinflammatory transcriptomic signature, with deregulation of immune and inflammatory modulators and regulators of the prostaglandin synthesis. Transformed hBMSCs lose their capacity to secrete the immunosuppressive prostacyclins prostaglandin E2 (PGE2) and PGI2 but produce proinflammatory thromboxanes. Together, the immunoregulatory profile adopted by hBMSCs largely depends on intrinsic genetic-molecular determinants triggered by genomic instability/oncogenic transformation.

In this study, Menendez, Delgado, and colleagues demonstrate that human bone marrow stromal/mesenchymal stem cells lose their immune properties in vitro and in vivo upon oncogenic transformation by skewing its anti-inflammatory phenotype toward proinflammatory with a deregulation of γ interferon, tumor necrosis factor α, interleukin 2 (IL2), PGE2, PGI1, thromboxanes, IL10, IL8, and C-X-C motif chemokine 10. These data have implications not only in ex vivo expansion of hBMSC but also in microenvironment tumor biology.

Karen English (2012)
Multipotent mesenchymal stromal cells (MSCs) have generated considerable interest in the fields of regenerative medicine, cell therapy and immune modulation. Over the past 5 years, the initial observations that MSCs could enhance regeneration and modulate immune responses have been significantly advanced and we now have a clearer picture of the effects that MSCs have on the immune system particularly in the context of inflammatory-mediated disorders. A number of mechanisms of action have been reported in MSC immunomodulation, which encompass the secretion of soluble factors, induction of anergy, apoptosis, regulatory T cells and tolerogenic dendritic cells. It is clear that MSCs modulate both innate and adaptive responses and evidence is now emerging that the local microenvironment is key in the activation or licensing of MSCs to become immunosuppressive. More recently, studies have suggested that MSCs have the capacity to sense their environment and have a role in pathogen clearance in conjunction with the resolution of insult or injury. This review focuses on the mechanisms of MSC immunomodulation discussing the multistep process of MSC localisation at sites of inflammation, the cross talk between MSCs and the local microenvironment as well as the subsequent mechanisms of action used to resolve inflammation.

Interleukin-32: a cytokine and inducer of TNFalpha.

Byoung Kim,  Tania Azam,  Sun Han … (2004)
We describe the gene structure, regulation, signal transduction. and functions of a cytokine, interleukin (IL)-32. An IL-18 unresponsive cell was converted to a responsive cell by transfection of the IL-18 receptor beta chain, and IL-18-induced microarray revealed high expression of a cytokine-like gene. Although IL-32 does not share sequence homology with known cytokine families, IL-32 induces various cytokines, human TNFalpha, and IL-8 in THP-1 monocytic cells as well as mouse TNFalpha and MIP-2 in Raw macrophage cells. IL-32 activates typical cytokine signal pathways of nuclear factor-kappa B (NF-kappaB) and p38 mitogen-activated protein kinase. IL-32 mRNA is highly expressed in immune tissue rather than other tissues. Human IL-32 exists as four splice variants, and IL-32 from other species were found as expressed sequence tag clones in the databank. Induced in human peripheral lymphocyte cells after mitogen stimulation, in human epithelial cells by IFNgamma, and in NK cells after exposure to the combination of IL-12 plus IL-18, IL-32 may play a role in inflammatory/autoimmune diseases.

Claudia Cortes,  N Varela,  D. Büscher … (2009)
Adult mesenchymal stem cells were recently found to suppress effector T cell and inflammatory responses and have emerged as attractive therapeutic candidates for immune disorders. In rheumatoid arthritis (RA), a loss in the immunological self-tolerance causes the activation of autoreactive T cells against joint components and subsequent chronic inflammation. The aim of this study is to characterise the immunosuppressive activity of human adipose-derived mesenchymal stem cells (hASCs) on collagen-reactive T cells from patients with RA. The effects of hASCs on collagen-reactive RA human T cell proliferation and cytokine production were investigated, as well as effects on the production of inflammatory mediators by monocytes and fibroblast-like synoviocytes from patients with RA. hASCs suppressed the antigen-specific response of T cells from patients with RA. hASCs inhibited the proliferative response and the production of inflammatory cytokines by collagen-activated CD4 and CD8 T cells. In contrast, the numbers of IL10-producing T cells and monocytes were significantly augmented upon hASC treatment. The suppressive activity of hASCs was cell-to-cell contact dependent and independent. hASCs also stimulated the generation of FoxP3 protein-expressing CD4(+)CD25(+) regulatory T cells, with the capacity to suppress collagen-specific T cell responses. Finally, hASCs downregulated the inflammatory response and the production of matrix-degrading enzymes by synovial cells isolated from patients with RA. The present work identifies hASCs as key regulators of immune tolerance, with the capacity to suppress T cell and inflammatory responses and to induce the generation/activation of antigen-specific regulatory T cells.