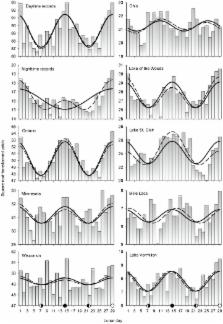 We analyzed angling catch records for 341,959 muskellunge ( Esox masquinongy) from North America to test for a cyclic lunar influence on the catch. Using periodic regression, we showed that the number caught was strongly related to the 29-day lunar cycle, and the effect was consistent across most fisheries. More muskellunge were caught around the full and new moon than at other times. At night, more muskellunge were caught around the full moon than the new moon. The predicted maximum relative effect was ≈5% overall. Anglers fishing exclusively on the peak lunar day would, on average, catch 5% more muskellunge than anglers fishing on random days. On some lakes and at night, the maximum relative effect was higher. We obtained angler effort data for Wisconsin, Mille Lacs (MN), and Lake Vermilion (MN). For Lake Vermilion there was a significant effect of the lunar cycle on angler effort. We could therefore not conclude that the lunar effect on catch was due to an effect on fish behavior alone. Several factors affected the amount of variation explained by the lunar cycle. The lunar effect was stronger for larger muskellunge (>102 cm) than for smaller fish, stronger in midsummer than in June or October, and stronger for fish caught at high latitudes (>48°N) than for fish caught further south. There was no difference in the lunar effect between expert and novice muskellunge anglers. We argue that this variation is evidence that the effect of the lunar cycle on catch is mediated by biological factors and is not due solely to angler effort and reflects lunar synchronization in feeding. This effect has been attributed to variation among moon phases in lunar illumination, but our results do not support that hypothesis for angler-caught muskellunge.

Physiological and behavioral consequences of long-term artificial selection for vulnerability to recreational angling in a teleost fish.

Steven Cooke,  Cory Suski,  Kenneth Ostrand … (2015)
Few studies have examined the physiological and behavioral consequences of fisheries-induced selection. We evaluated how four generations of artificial truncation selection for vulnerability to recreational angling (i.e., stocks selected for high and low vulnerability [HVF and LVF, respectively]) affected cardiovascular physiology and parental care behavior in the teleost fish largemouth bass Micropterus salmoides. Where possible, we compared artificially selected fish to control fish (CF) collected from the wild. Although, compared to control fish, resting cardiac activity was approximately 18% lower for LVF and approximately 20% higher for HVF, maximal values did not vary among treatments. As a result, the HVF had less cardiac scope than either LVF or CF. Recovery rates after exercise were similar for HVF and CF but slower for LVF. When engaged in parental care activities, nesting male HVF were captured more easily than male LVF. During parental care, HVF also had higher turning rates and pectoral and caudal fin beat rates, increased vigilance against predators, and higher in situ swimming speeds. Energetics simulations indicated that to achieve the same level of growth, the disparity in metabolic rates would require HVF to consume approximately 40% more food than LVF. Selection for angling vulnerability resulted in clear differences in physiological and energetic attributes. Not only is vulnerability to angling a heritable trait, but high vulnerability covaries with factors including higher metabolic rates, reduced metabolic scope, and increased parental care activity. Despite these energetically costly differences, HVF and LVF of the same age were of similar size, suggesting that heightened food consumption in HVF compensated for added costs in experimental ponds. Ultimately, angling vulnerability appears to be a complex interaction of numerous factors leading to selection for very different phenotypes. If HVF are selectively harvested from a population, the remaining fish in that population may be less effective in providing parental care, potentially reducing reproductive output. The strong angling pressure in many freshwater systems, and therefore the potential for this to occur in the wild, necessitate management approaches that recognize the potential evolutionary consequences of angling.

Coexistence of behavioural types in an aquatic top predator: a response to resource limitation?

Thomas Klefoth,  Thomas Mehner,  Alexander Kobler … (2009)
Intra-population variation in behaviour unrelated to sex, size or age exists in a variety of species. The mechanisms behind behavioural diversification have only been partly understood, but density-dependent resource availability may play a crucial role. To explore the potential coexistence of different behavioural types within a natural fish population, we conducted a radio telemetry study, measuring habitat use and swimming activity patterns of pike (Esox lucius), a sit-and-wait predatory fish. Three behavioural types co-occurred in the study lake. While two types of fish only selected vegetated littoral habitats, the third type opportunistically used all habitats and increased its pelagic occurrence in response to decreasing resource biomasses. There were no differences in size, age or lifetime growth between the three behavioural types. However, habitat-opportunistic pike were substantially more active than the other two behavioural types, which is energetically costly. The identical growth rates exhibited by all behavioural types indicate that these higher activity costs of opportunistic behaviour were compensated for by increased prey consumption in the less favourable pelagic habitat resulting in approximately equal fitness of all pike groups. We conclude that behavioural diversification in habitat use and activity reduces intraspecific competition in preferred littoral habitats. This may facilitate the emergence of an ideal free distribution of pike along resource gradients.

Lunar periodicity and the timing of river entry in Atlantic salmon Salmo salar.

A Kuparinen,  R O'Hara,  Juha Merilä (2009)
Historical catch records of Atlantic salmon Salmo salar from three rivers discharging to the Baltic Sea in an area free from tides and from strong effects of the moon on illumination were analysed to investigate whether timing of S. salar river entry was associated with lunar cycles directly. Although a significant effect of lunar phase on river entry was detected, with more fish entering rivers around the full moon than other phases, the effect of the lunar cycle was very small compared with other sources of variation. Hence, the biological role of lunar cycle as a determinant of the timing of S. salar runs in the investigated populations was negligible, suggesting that lunar cycle per se does not play a role in the timing of S. salar river entry.

This work was supported by the U.S. Geological Survey and the U.S. Environmental Protection Agency. The views expressed in this paper are the authors' and do not necessarily reflect U.S. Geological Survey or U.S. Environmental Protection Agency policy. The funders had no role in study design, data collection and analysis, decision to publish, or preparation of the manuscript.