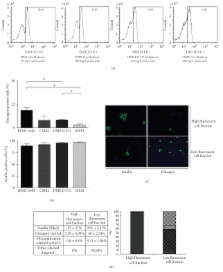 Isolation of primary beta cells from other cells within in the pancreatic islets is of importance for many fields of islet research. However, up to now, no satisfactory method has been developed that gained high numbers of viable beta cells, without considerable alpha-cell contamination. In this study, we investigated whether rat beta cells can be isolated from nonbeta endocrine cells by manipulating the flavin adenine dinucleotide (FAD) and nicotinamide-adenine dinucleotide phosphate (NAD(P)H) autofluorescence. Beta cells were isolated from dispersed islets by flow cytometry, based on their high FAD and NAD(P)H fluorescence. To improve beta cell yield and purity, the cellular FAD and NAD(P)H contents were altered by preincubation in culture media containing varying amounts of D-glucose and amino acids. Manipulation of the cellular FAD and NAD(P)H fluorescence improves beta cell yield and purity after sorting. This method is also a fast and reliable method to measure beta cell functional viability. A conceivable application is assessing beta cell viability before transplantation.

WILLY MALAISSE,  A Sener (1980)
The release of insulin evoked by nutrients in the pancreatic beta-cell is attributed to either the activation of a stereospecific receptor by the nutrient molecule itself or the generation of one or more signal(s) through the intracellular metabolism of the nutrient secretagogue. The first of these hypotheses is apparently supported by the fact the nonmetabolized amino acids, especially the L-leucine analogue b(-)2-amino-bicyclo[2,2,1]heptane-2-carbocyclic acid (BCH), stimulate insulin release. However, we now report evidence in support of the second hypothesis. We present data consistent with the idea that BCH induces insulin release through the allosteric activation of glutamate dehydrogenase. This is compatible with the fuel hypothesis, which states that the secretory response to nutrient secretagogues depends always on an increase of catabolic fluxes in the islet cells.

Glucose-regulated anaplerosis and cataplerosis in pancreatic beta-cells: possible implication of a pyruvate/citrate shuttle in insulin secretion.

V Schulz,  B Corkey,  S Farfari … (2000)
The hypothesis proposing that anaplerosis and cataplerosis play an important role in fuel signaling by providing mitochondrially derived coupling factors for stimulation of insulin secretion was tested. A rise in citrate coincided with the initiation of insulin secretion in response to glucose in INS-1 beta-cells. The dose dependence of glucose-stimulated insulin release correlated closely with those of the cellular contents of citrate, malate, and citrate-derived malonyl-CoA. The glucose-induced elevations in citrate, alpha-ketoglutarate, malonyl-CoA, and the 3-[4,5-dimethylthiazol-2yl]-2,5-diphenyltetrazolium reduction state, an index of beta-cell metabolic activity, were unaffected by the Ca2+ chelator EGTA. Glucose induced a rise in both mitochondrial and cytosolic citrate and promoted efflux of citrate from the cells. The latter amounted to approximately 20% of glucose carbons entering the glycolytic pathway. Phenylacetic acid, a pyruvate carboxylase inhibitor, reduced the glucose-induced rise in citrate in INS-1 cells and insulin secretion in both INS-1 cells and rat islets. The results indicate the feasibility of a pyruvate/citrate shuttle in INS-1 beta-cells, allowing the regeneration of NAD+ in the cytosol and the formation of cytosolic acetyl-CoA, malonyl-CoA, and NADPH. The data suggest that anaplerosis and cataplerosis are early signaling events in beta-cell activation that do not require a rise in Ca2+. It is proposed that citrate is a signal of fuel abundance that contributes to beta-cell activation in both the mitochondrial and cytosolic compartments and that a major fate of anaplerotic glucose carbons is external citrate.

Sharon Brennan-Olsen,  I K Bender,  Patrick A. Kiely … (2007)
In addition to the primary stimulus of glucose, specific amino acids may acutely and chronically regulate insulin secretion from pancreatic beta-cells in vivo and in vitro. Mitochondrial metabolism is crucial for the coupling of glucose, alanine, glutamine and glutamate recognition with exocytosis of insulin granules. This is illustrated by in vitro and in vivo observations discussed in the present review. Mitochondria generate ATP (the main coupling messenger in insulin secretion) and other factors that serve as sensors for the control of the exocytotic process. The main factors that mediate the key amplifying pathway over the Ca(2+) signal in nutrient-stimulated insulin secretion are nucleotides (ATP, GTP, cAMP and NADPH), although metabolites have also been proposed, such as long-chain acyl-CoA derivatives and glutamate. In addition, after chronic exposure, specific amino acids may influence gene expression in the beta-cell, which have an impact on insulin secretion and cellular integrity. Therefore amino acids may play a direct or indirect (via generation of putative messengers of mitochondrial origin) role in insulin secretion.