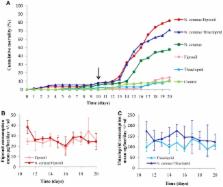 The honeybee, Apis mellifera, is undergoing a worldwide decline whose origin is still in debate. Studies performed for twenty years suggest that this decline may involve both infectious diseases and exposure to pesticides. Joint action of pathogens and chemicals are known to threaten several organisms but the combined effects of these stressors were poorly investigated in honeybees. Our study was designed to explore the effect of Nosema ceranae infection on honeybee sensitivity to sublethal doses of the insecticides fipronil and thiacloprid.

Five days after their emergence, honeybees were divided in 6 experimental groups: (i) uninfected controls, (ii) infected with N. ceranae, (iii) uninfected and exposed to fipronil, (iv) uninfected and exposed to thiacloprid, (v) infected with N. ceranae and exposed 10 days post-infection (p.i.) to fipronil, and (vi) infected with N. ceranae and exposed 10 days p.i. to thiacloprid. Honeybee mortality and insecticide consumption were analyzed daily and the intestinal spore content was evaluated 20 days after infection. A significant increase in honeybee mortality was observed when N. ceranae-infected honeybees were exposed to sublethal doses of insecticides. Surprisingly, exposures to fipronil and thiacloprid had opposite effects on microsporidian spore production. Analysis of the honeybee detoxification system 10 days p.i. showed that N. ceranae infection induced an increase in glutathione-S-transferase activity in midgut and fat body but not in 7-ethoxycoumarin-O-deethylase activity.

After exposure to sublethal doses of fipronil or thiacloprid a higher mortality was observed in N. ceranae-infected honeybees than in uninfected ones. The synergistic effect of N. ceranae and insecticide on honeybee mortality, however, did not appear strongly linked to a decrease of the insect detoxification system. These data support the hypothesis that the combination of the increasing prevalence of N. ceranae with high pesticide content in beehives may contribute to colony depopulation.

Claudia Simons,  William Evans,  Gustavo Palacios … (2007)
In colony collapse disorder (CCD), honey bee colonies inexplicably lose their workers. CCD has resulted in a loss of 50 to 90% of colonies in beekeeping operations across the United States. The observation that irradiated combs from affected colonies can be repopulated with naive bees suggests that infection may contribute to CCD. We used an unbiased metagenomic approach to survey microflora in CCD hives, normal hives, and imported royal jelly. Candidate pathogens were screened for significance of association with CCD by the examination of samples collected from several sites over a period of 3 years. One organism, Israeli acute paralysis virus of bees, was strongly correlated with CCD.

Publisher ID: PONE-D-11-04998
DOI: 10.1371/journal.pone.0021550
PMC ID: 3125288
PubMed ID: 21738706
Copyright statement: Vidau et al. This is an open-access article distributed under the terms of the Creative Commons Attribution License, which permits unrestricted use, distribution, and reproduction in any medium, provided the original author and source are credited.