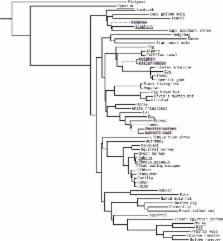 Convergent evolution provides insight into the link between phenotype and genotype. Recently, large-scale comparative studies of convergent evolution have become possible, but researchers are still trying to determine the best way to design these types of analyses. One aspect of molecular convergence studies that has not yet been investigated is how taxonomic sample size affects inferences of molecular convergence. Here we show that increased sample size decreases the amount of inferred molecular convergence associated with the three convergent transitions to a marine environment in mammals. The sampling of more taxa—both with and without the convergent phenotype—reveals that alleles associated only with marine mammals in small datasets are actually more widespread, or are not shared by all marine species. The sampling of more taxa also allows finer resolution of ancestral substitutions, revealing that they are not in fact on lineages leading to solely marine species. We revisit a previous study on marine mammals and find that only 7 of the reported 43 genes with convergent substitutions still show signs of convergence with a larger number of background species. However, four of those seven genes also showed signs of positive selection in the original analysis and may still be good candidates for adaptive convergence. Though our study is framed around the convergence of marine mammals, we expect our conclusions on taxonomic sampling are generalizable to any study of molecular convergence.

Debbe Thompson,  Edward Marcotte,  M Pellegrini … (1999)
Determining protein functions from genomic sequences is a central goal of bioinformatics. We present a method based on the assumption that proteins that function together in a pathway or structural complex are likely to evolve in a correlated fashion. During evolution, all such functionally linked proteins tend to be either preserved or eliminated in a new species. We describe this property of correlated evolution by characterizing each protein by its phylogenetic profile, a string that encodes the presence or absence of a protein in every known genome. We show that proteins having matching or similar profiles strongly tend to be functionally linked. This method of phylogenetic profiling allows us to predict the function of uncharacterized proteins.

Parallel patterns of evolution in the genomes and transcriptomes of humans and chimpanzees.

Katja Nowick,  Michael Lachmann,  Philipp Khaitovich … (2005)
The determination of the chimpanzee genome sequence provides a means to study both structural and functional aspects of the evolution of the human genome. Here we compare humans and chimpanzees with respect to differences in expression levels and protein-coding sequences for genes active in brain, heart, liver, kidney, and testis. We find that the patterns of differences in gene expression and gene sequences are markedly similar. In particular, there is a gradation of selective constraints among the tissues so that the brain shows the least differences between the species whereas liver shows the most. Furthermore, expression levels as well as amino acid sequences of genes active in more tissues have diverged less between the species than have genes active in fewer tissues. In general, these patterns are consistent with a model of neutral evolution with negative selection. However, for X-chromosomal genes expressed in testis, patterns suggestive of positive selection on sequence changes as well as expression changes are seen. Furthermore, although genes expressed in the brain have changed less than have genes expressed in other tissues, in agreement with previous work we find that genes active in brain have accumulated more changes on the human than on the chimpanzee lineage.

The role of lineage-specific gene family expansion in the evolution of eukaryotes.

L Aravind,  Maxim Wolf,  Olivier Lespinet … (2002)
A computational procedure was developed for systematic detection of lineage-specific expansions (LSEs) of protein families in sequenced genomes and applied to obtain a census of LSEs in five eukaryotic species, the yeasts Saccharomyces cerevisiae and Schizosaccharomyces pombe, the nematode Caenorhabditis elegans, the fruit fly Drosophila melanogaster, and the green plant Arabidopsis thaliana. A significant fraction of the proteins encoded in each of these genomes, up to 80% in A. thaliana, belong to LSEs. Many paralogous gene families in each of the analyzed species are almost entirely comprised of LSEs, indicating that their diversification occurred after the divergence of the major lineages of the eukaryotic crown group. The LSEs show readily discernible patterns of protein functions. The functional categories most prone to LSE are structural proteins, enzymes involved in an organism's response to pathogens and environmental stress, and various components of signaling pathways responsible for specificity, including ubiquitin ligase E3 subunits and transcription factors. The functions of several previously uncharacterized, vastly expanded protein families were predicted through in-depth protein sequence analysis, for example, small-molecule kinases and methylases that are expanded independently in the fly and in the nematode. The functions of several other major LSEs remain mysterious; these protein families are attractive targets for experimental discovery of novel, lineage-specific functions in eukaryotes. LSEs seem to be one of the principal means of adaptation and one of the most important sources of organizational and regulatory diversity in crown-group eukaryotes.