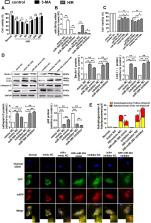 Epigallocatechin gallate (EGCG) has established protective actions against myocardial ischemia/reperfusion (I/R) injury by regulating autophagy. However, little is known about the mechanisms of EGCG in posttranscriptional regulation in the process of cardioprotection. Here we studied whether microRNAs play a role in EGCG-induced cardioprotection.

The myocardial I/R injury in vitro and in vivo model were made, with or without EGCG pretreatment. The upregulation and silencing of microRNA-384-5p (miR-384) and Beclin-1 in H9c2 cell lines were established. Rats were transfected with miR-384 specific shRNA. Dual-luciferase reporter gene assay was conducted to verify the relationship between miR-384 and Beclin-1. TTC staining was performed to analyze the area of myocardial infarct size. Cell viability was monitored by cell counting kit-8 (CCK-8). The release of cardiac troponin-I (cTnI) was examined by ELISA. The levels of autophagy-related genes or proteins expression were evaluated by qRT-PCR or Western blotting. Autophagosomes of myocardial cells were detected by transmission electron microscopy and laser scanning confocal microscope.

I/R increased both autophagosomes and autolysosomes, thereby increasing autophagic flux both in vitro and in vivo. Pretreatment with EGCG attenuated I/R-induced autophagic flux expression, accompanied by an increase in cell viability and a decrease in the size of myocardial infarction. MiR-384 expression was down-regulated in H9c2 cell lines when subjected to I/R, while this suppression could be reversed by EGCG pretreatment. The dual-luciferase assay verified that Beclin-1 was a target of miR-384. Both overexpression of miR-384 and knocking down of Beclin-1 significantly inhibited I/R-induced autophagy, accompanied by the activation of PI3K/Akt pathway, thus enhanced the protective effect of EGCG. However, these functions were abrogated by the PI3K inhibitor, LY294002.

We confirmed that EGCG has a protective role in microRNA-384-mediated autophagy by targeting Beclin-1 via activating the PI3K/Akt signaling pathway. Our results unveiled a novel role of EGCG in myocardial protection, involving posttranscriptional regulation with miRNA-384.

The return of the nucleus: transcriptional and epigenetic control of autophagy.

Jens Füllgrabe,  Bertrand Joseph,  D J Klionsky (2013)
Autophagy is a conserved process by which cytoplasmic components are degraded by the lysosome. It is commonly seen as a cytoplasmic event and, until now, nuclear events were not considered of primary importance for this process. However, recent studies have unveiled a transcriptional and epigenetic network that regulates autophagy. The identification of tightly controlled transcription factors (such as TFEB and ZKSCAN3), microRNAs and histone marks (especially acetylated Lys16 of histone 4 (H4K16ac) and dimethylated H3K9 (H3K9me2)) associated with the autophagic process offers an attractive conceptual framework to understand the short-term transcriptional response and potential long-term responses to autophagy.

Polyphenols: Benefits to the Cardiovascular System in Health and in Aging

Sandhya Khurana,  Krishnan Venkataraman,  Amanda Hollingsworth … (2013)
Numerous studies have demonstrated the importance of naturally occurring dietary polyphenols in promoting cardiovascular health and emphasized the significant role these compounds play in limiting the effects of cellular aging. Polyphenols such as resveratrol, epigallocatechin gallate (EGCG), and curcumin have been acknowledged for having beneficial effects on cardiovascular health, while some have also been shown to be protective in aging. This review highlights the literature surrounding this topic on the prominently studied and documented polyphenols as pertaining to cardiovascular health and aging.