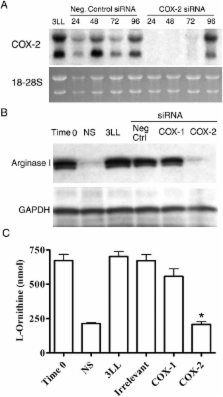 Myeloid suppressor cells (MSCs) producing high levels of arginase I block T cell function by depleting l-arginine in cancer, chronic infections, and trauma patients. In cancer, MSCs infiltrating tumors and in circulation are an important mechanism for tumor evasion and impair the therapeutic potential of cancer immunotherapies. However, the mechanisms that induce arginase I in MSCs in cancer are unknown. Using the 3LL mouse lung carcinoma, we aimed to characterize these mechanisms. Arginase I expression was independent of T cell–produced cytokines. Instead, tumor-derived soluble factors resistant to proteases induced and maintained arginase I expression in MSCs. 3LL tumor cells constitutively express cyclooxygenase (COX)-1 and COX-2 and produce high levels of PGE 2. Genetic and pharmacological inhibition of COX-2, but not COX-1, blocked arginase I induction in vitro and in vivo. Signaling through the PGE 2 receptor E-prostanoid 4 expressed in MSCs induced arginase I. Furthermore, blocking arginase I expression using COX-2 inhibitors elicited a lymphocyte-mediated antitumor response. These results demonstrate a new pathway of prostaglandin-induced immune dysfunction and provide a novel mechanism that can help explain the cancer prevention effects of COX-2 inhibitors. Furthermore, an addition of arginase I represents a clinical approach to enhance the therapeutic potential of cancer immunotherapies.

Shuh Narumiya, Yukihiko Sugimoto, Fumitaka Ushikubi (1999)
Prostanoids are the cyclooxygenase metabolites of arachidonic acid and include prostaglandin (PG) D(2), PGE(2), PGF(2alpha), PGI(2), and thromboxne A(2). They are synthesized and released upon cell stimulation and act on cells in the vicinity of their synthesis to exert their actions. Receptors mediating the actions of prostanoids were recently identified and cloned. They are G protein-coupled receptors with seven transmembrane domains. There are eight types and subtypes of prostanoid receptors that are encoded by different genes but as a whole constitute a subfamily in the superfamily of the rhodopsin-type receptors. Each of the receptors was expressed in cultured cells, and its ligand-binding properties and signal transduction pathways were characterized. Moreover, domains and amino acid residues conferring the specificities of ligand binding and signal transduction are being clarified. Information also is accumulating as to the distribution of these receptors in the body. It is also becoming clear for some types of receptors how expression of their genes is regulated. Furthermore, the gene for each of the eight types of prostanoid receptor has been disrupted, and mice deficient in each type of receptor are being examined to identify and assess the roles played by each receptor under various physiological and pathophysiological conditions. In this article, we summarize these findings and attempt to give an overview of the current status of research on the prostanoid receptors.

R Greenlee, T. Murray, S Bolden … (2000)
The Surveillance Research Program of the American Cancer Society's Department of Epidemiology and Surveillance Research reports its annual compilation of estimated cancer incidence, mortality, and survival data for the United States in the year 2000. After 70 years of increases, the recorded number of total cancer deaths among men in the US declined for the first time from 1996 to 1997. This decrease in overall male mortality is the result of recent down-turns in lung and bronchus cancer deaths, prostate cancer deaths, and colon and rectum cancer deaths. Despite decreasing numbers of deaths from female breast cancer and colon and rectum cancer, mortality associated with lung and bronchus cancer among women continues to increase. Lung cancer is expected to account for 25% of all female cancer deaths in 2000. This report also includes a summary of global cancer mortality rates using data from the World Health Organization.

M. A. Mazzoni, Alberto Visintin, Paola Zanovello … (2002)
CD11b(+)Gr-1(+) myeloid suppressor cells (MSC) accumulate in lymphoid organs under conditions of intense immune stress where they inhibit T and B cell function. We recently described the generation of immortalized MSC lines that provide a homogeneous source of suppressor cells for dissecting the mechanism of suppression. In this study we show that the MSC lines potently block in vitro proliferation of T cells stimulated with either mitogen or antigenic peptide, with as few as 3% of MSC cells causing complete suppression. Inhibition of mitogenic and peptide-specific responses is not associated with a loss in IL-2 production or inability to up-modulate the early activation markers, CD69 and CD25, but results in direct impairment of the three IL-2R signaling pathways, as demonstrated by the lack of Janus kinase 3, STAT5, extracellular signal-regulated kinase, and Akt phosphorylation in response to IL-2. Suppression is mediated by and requires NO, which is secreted by MSC in response to signals from activated T cells, including IFN-gamma and a contact-dependent stimulus. Experiments with inducible NO synthase knockout mice demonstrated that the inhibition of T cell proliferation by CD11b(+)Gr-1(+) cells in the spleens of immunosuppressed mice is also dependent upon NO, indicating that the MSC lines accurately represent their normal counterparts. The distinctive capacity of MSC to generate suppressive signals when encountering activated T cells defines a specialized subset of myeloid cells that most likely serve a regulatory function during times of heightened immune activity.