Anopheles gambiae complex along The Gambia river, with particular reference to the molecular forms of An. gambiae s.s 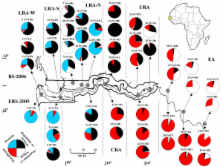 The geographic and temporal distribution of M and S molecular forms of the major Afrotropical malaria vector species Anopheles gambiae s.s. at the western extreme of their range of distribution has never been investigated in detail.

Collections of indoor-resting An. gambiae s.l. females were carried out along a ca. 400 km west to east transect following the River Gambia from the western coastal region of The Gambia to south-eastern Senegal during 2005 end of rainy season/early dry season and the 2006 rainy season. Specimens were identified to species and molecular forms by PCR-RFLP and the origin of blood-meal of fed females was determined by ELISA test.

Over 4,000 An. gambiae s.l. adult females were collected and identified, 1,041 and 3,038 in 2005 and 2006, respectively. M-form was mainly found in sympatry with Anopheles melas and S-form in the western part of the transect, and with Anopheles arabiensis in the central part. S-form was found to prevail in rural Sudan-Guinean savannah areas of Eastern Senegal, in sympatry with An. arabiensis. Anopheles melas and An. arabiensis relative frequencies were generally lower in the rainy season samples, when An. gambiae s.s. was prevailing. No large seasonal fluctuations were observed for M and S-forms. In areas where both M and S were recorded, the frequency of hybrids between them ranged from to 0.6% to 7%.

The observed pattern of taxa distribution supports the hypothesis of a better adaptation of M-form to areas characterized by water-retaining alluvial deposits along the Gambia River, characterized by marshy vegetation, mangrove woods and rice cultivations. In contrast, the S-form seems to be better adapted to free-draining soil, covered with open woodland savannah or farmland, rich in temporary larval breeding sites characterizing mainly the eastern part of the transect, where the environmental impact of the Gambia River is much less profound and agricultural activities are mainly rain-dependent. Very interestingly, the observed frequency of hybridization between the molecular forms along the whole transect was much higher than has been reported so far for other areas.

The results support a bionomic divergence between the M and S-forms, and suggest that the western extreme of An. gambiae s.s. geographical distribution may represent an area of higher-than-expected hybridization between the two molecular forms.

Federica Santolamazza,  Emiliano Mancini,  Frédéric Simard … (2008)
Background SINEs (Short INterspersed Elements) are homoplasy-free and co-dominant genetic markers which are considered to represent useful tools for population genetic studies, and could help clarifying the speciation processes ongoing within the major malaria vector in Africa, Anopheles gambiae s.s. Here, we report the results of the analysis of the insertion polymorphism of a nearly 200 bp-long SINE (SINE200) within genome areas of high differentiation (i.e. "speciation islands") of M and S A. gambiae molecular forms. Methods A SINE-PCR approach was carried out on thirteen SINE200 insertions in M and S females collected along the whole range of distribution of A. gambiae s.s. in sub-Saharan Africa. Ten specimens each for Anopheles arabiensis, Anopheles melas, Anopheles quadriannulatus A and 15 M/S hybrids from laboratory crosses were also analysed. Results Eight loci were successfully amplified and were found to be specific for A. gambiae s.s.: 5 on 2L chromosome and one on X chromosome resulted monomorphic, while two loci positioned respectively on 2R (i.e. S200 2R12D) and X (i.e. S200 X6.1) chromosomes were found to be polymorphic. S200 2R12D was homozygote for the insertion in most S-form samples, while intermediate levels of polymorphism were shown in M-form, resulting in an overall high degree of genetic differentiation between molecular forms (Fst = 0.46 p < 0.001) and within M-form (Fst = 0.46 p < 0.001). The insertion of S200 X6.1 was found to be fixed in all M- and absent in all S-specimens. This led to develop a novel easy-to-use PCR approach to straightforwardly identify A. gambiae molecular forms. This novel approach allows to overcome the constraints associated with markers on the rDNA region commonly used for M and S identification. In fact, it is based on a single copy and irreversible SINE200 insertion and, thus, is not subjected to peculiar evolutionary patterns affecting rDNA markers, e.g. incomplete homogenization of the arrays through concerted evolution and/or mixtures of M and S IGS-sequences among the arrays of single chromatids. Conclusion The approach utilized allowed to develop new easy-to-use co-dominant markers for the analysis of genetic differentiation between M and S-forms and opens new perspectives in the study of the speciation process ongoing within A. gambiae.

Simultaneous identification of species and molecular forms of the Anopheles gambiae complex by PCR-RFLP.

C. Fanello,  B Torre,  F Santolamazza (2002)
For differential identification of sibling species in the Anopheles gambiae Giles complex (Diptera: Culicidae), including simultaneous separation of M and S molecular forms within An. gambiae Giles sensu stricto, we describe a PCR-RFLP method. This procedure is more efficient, faster and cheaper than those used before, so is recommended for large-scale processing of field-collected larval and adult specimens to be identified in malaria vector studies.