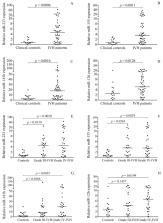 Intraventricular hemorrhage (IVH) represents a high risk of neonatal mortality and later neurodevelopmental impairment in prematurity. IVH is accompanied with inflammation, hemolysis, and extracellular hemoglobin (Hb) oxidation. However, microRNA (miRNA) expression in cerebrospinal fluid (CSF) of preterm infants with IVH has been unknown. Therefore, in the present study, candidate pro-inflammatory cell-free miRNAs were analyzed in CSF samples from 47 preterm infants with grade III or IV IVH vs. clinical controls ( n = 14). miRNAs were quantified by RT-qPCR, normalized to “spike-in” cel-miR-39. Oxidized Hb and total heme levels were determined by spectrophotometry as well as IL-8, VCAM-1, ICAM-1, and E-selectin concentrations by ELISA. To reveal the origin of the investigated miRNAs, controlled hemolysis experiments were performed in vitro; in addition, human choroid plexus epithelial cell (HCPEpiC) cultures were treated with metHb, ferrylHb, heme, or TNF-α to replicate IVH-triggered cellular conditions. Levels of miR-223, miR-155, miR-181b, and miR-126 as well as Hb metabolites along with IL-8 were elevated in CSF after the onset of IVH vs. controls. Significant correlations were observed among the miRNAs, oxidized Hb forms, and the soluble adhesion molecules. During the post-IVH follow-up, attenuated expression of miRNAs and protein biomarkers in CSF was observed upon elimination of Hb metabolites. These miRNAs remained unaffected by a series of artificially induced hemolysis, which excluded red blood cells as their origin, while stimulation of HCPEpiCs with oxidized Hb fractions and heme resulted in increased extracellular miRNA levels in the cell culture supernatant. Overall, the hemorrhage-induced CSF miRNAs reflected inflammatory conditions as potential biomarkers in preterm IVH.

Michaela Kirschner,  Steven Kao,  J. James B. Edelman … (2011)
The presence of cell-free microRNAs (miRNAs) has been detected in a range of body fluids. The miRNA content of plasma/serum in particular has been proposed as a potential source of novel biomarkers for a number of diseases. Nevertheless, the quantification of miRNAs from plasma or serum is made difficult due to inefficient isolation and lack of consensus regarding the optimal reference miRNA. The effect of haemolysis on the quantification and normalisation of miRNAs in plasma has not been investigated in great detail. We found that levels of miR-16, a commonly used reference gene, showed little variation when measured in plasma samples from healthy volunteers or patients with malignant mesothelioma or coronary artery disease. Including samples with evidence of haemolysis led to variation in miR-16 levels and consequently decreased its ability to serve as a reference. The levels of miR-16 and miR-451, both present in significant levels in red blood cells, were proportional to the degree of haemolysis. Measurements of the level of these miRNAs in whole blood, plasma, red blood cells and peripheral blood mononuclear cells revealed that the miRNA content of red blood cells represents the major source of variation in miR-16 and miR-451 levels measured in plasma. Adding lysed red blood cells to non-haemolysed plasma allowed a cut-off level of free haemoglobin to be determined, below which miR-16 and miR-451 levels displayed little variation between individuals. In conclusion, increases in plasma miR-16 and miR-451 are caused by haemolysis. In the absence of haemolysis the levels of both miR-16 and miR-451 are sufficiently constant to serve as normalisers.

Xinghui Sun,  Basak Icli,  Akm Wara … (2012)
EC activation and dysfunction have been linked to a variety of vascular inflammatory disease states. The function of microRNAs (miRNAs) in vascular EC activation and inflammation remains poorly understood. Herein, we report that microRNA-181b (miR-181b) serves as a potent regulator of downstream NF-κB signaling in the vascular endothelium by targeting importin-α3, a protein that is required for nuclear translocation of NF-κB. Overexpression of miR-181b inhibited importin-α3 expression and an enriched set of NF-κB-responsive genes such as adhesion molecules VCAM-1 and E-selectin in ECs in vitro and in vivo. In addition, treatment of mice with proinflammatory stimuli reduced miR-181b expression. Rescue of miR-181b levels by systemic administration of miR-181b "mimics" reduced downstream NF-κB signaling and leukocyte influx in the vascular endothelium and decreased lung injury and mortality in endotoxemic mice. In contrast, miR-181b inhibition exacerbated endotoxin-induced NF-κB activity, leukocyte influx, and lung injury. Finally, we observed that critically ill patients with sepsis had reduced levels of miR-181b compared with control intensive care unit (ICU) subjects. Collectively, these findings demonstrate that miR-181b regulates NF-κB-mediated EC activation and vascular inflammation in response to proinflammatory stimuli and that rescue of miR-181b expression could provide a new target for antiinflammatory therapy and critical illness.

Pia Kivisäkk,  Don J Mahad,  Melissa Callahan … (2003)
Cerebrospinal fluid (CSF) from healthy individuals contains between 1,000 and 3,000 leukocytes per ml. Little is known about trafficking patterns of leukocytes between the systemic circulation and the noninflamed CNS. In the current study, we characterized the surface phenotype of CSF cells and defined the expression of selected adhesion molecules on vasculature in the choroid plexus, the subarachnoid space surrounding the cerebral cortex, and the cerebral parenchyma. Using multicolor flow cytometry, we found that CSF cells predominantly consisted of CD4+/CD45RA-/CD27+/CD69+-activated central memory T cells expressing high levels of CCR7 and L-selectin. CD3+ T cells were present in the choroid plexus stroma in autopsy CNS tissue sections from individuals who died without known neurological disorders. P- and E-selectin immunoreactivity was detected in large venules in the choroid plexus and subarachnoid space, but not in parenchymal microvessels. CD4+ T cells in the CSF expressed high levels of P-selectin glycoprotein ligand 1, and a subpopulation of circulating CD4+ T cells displayed P-selectin binding activity. Intercellular adhesion molecule 1, but not vascular cell adhesion molecule 1 or mucosal addressin cell adhesion molecule 1, was expressed in choroid plexus and subarachnoid space vessels. Based on these findings, we propose that T cells are recruited to the CSF through interactions between P-selectin/P-selectin ligands and intercellular adhesion molecule 1/lymphocyte function-associated antigen 1 in choroid plexus and subarachnoid space venules. These results support the overall hypothesis that activated memory T cells enter CSF directly from the systemic circulation and monitor the subarachnoid space, retaining the capacity to either initiate local immune reactions or return to secondary lymphoid organs.