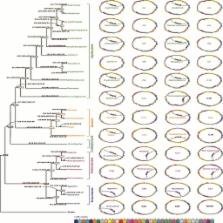 Conifers II (cupressophytes), comprising about 400 tree species in five families, are the most diverse group of living gymnosperms. Their plastid genomes (plastomes) are highly variable in size and organization, but such variation has never been systematically studied. In this study, we assessed the potential mechanisms underlying the evolution of cupressophyte plastomes. We analyzed the plastomes of 24 representative genera in all of the five cupressophyte families, focusing on their variation in size, noncoding DNA content, and nucleotide substitution rates. Using a tree-based method, we further inferred the ancestral plastomic organizations of internal nodes and evaluated the inversions across the evolutionary history of cupressophytes. Our data showed that variation in plastome size is statistically associated with the dynamics of noncoding DNA content, which results in different degrees of plastomic compactness among the cupressophyte families. The degrees of plastomic inversions also vary among the families, with the number of inversions per genus ranging from 0 in Araucariaceae to 1.27 in Cupressaceae. In addition, we demonstrated that synonymous substitution rates are significantly correlated with plastome size as well as degree of inversions. These data suggest that in cupressophytes, mutation rates play a critical role in driving the evolution of plastomic size while plastomic inversions evolve in a neutral manner.

The origins of genome complexity.

Michael Lynch,  John Conery (2003)
Complete genomic sequences from diverse phylogenetic lineages reveal notable increases in genome complexity from prokaryotes to multicellular eukaryotes. The changes include gradual increases in gene number, resulting from the retention of duplicate genes, and more abrupt increases in the abundance of spliceosomal introns and mobile genetic elements. We argue that many of these modifications emerged passively in response to the long-term population-size reductions that accompanied increases in organism size. According to this model, much of the restructuring of eukaryotic genomes was initiated by nonadaptive processes, and this in turn provided novel substrates for the secondary evolution of phenotypic complexity by natural selection. The enormous long-term effective population sizes of prokaryotes may impose a substantial barrier to the evolution of complex genomes and morphologies.

Mutation pressure and the evolution of organelle genomic architecture.

Britt Koskella,  Sarah Schaack,  Michael Lynch (2006)
The nuclear genomes of multicellular animals and plants contain large amounts of noncoding DNA, the disadvantages of which can be too weak to be effectively countered by selection in lineages with reduced effective population sizes. In contrast, the organelle genomes of these two lineages evolved to opposite ends of the spectrum of genomic complexity, despite similar effective population sizes. This pattern and other puzzling aspects of organelle evolution appear to be consequences of differences in organelle mutation rates. These observations provide support for the hypothesis that the fundamental features of genome evolution are largely defined by the relative power of two nonadaptive forces: random genetic drift and mutation pressure.

Jeffrey Boore,  Patrick J Calie,  Robert K Jansen … (2006)
The chloroplast genome of Pelargonium x hortorum has been completely sequenced. It maps as a circular molecule of 217,942 bp and is both the largest and most rearranged land plant chloroplast genome yet sequenced. It features 2 copies of a greatly expanded inverted repeat (IR) of 75,741 bp each and, consequently, diminished single-copy regions of 59,710 and 6,750 bp. Despite the increase in size and complexity of the genome, the gene content is similar to that of other angiosperms, with the exceptions of a large number of pseudogenes, the recognition of 2 open reading frames (ORF56 and ORF42) in the trnA intron with similarities to previously identified mitochondrial products (ACRS and pvs-trnA), the losses of accD and trnT-ggu and, in particular, the presence of a highly divergent set of rpoA-like ORFs rather than a single, easily recognized gene for rpoA. The 3-fold expansion of the IR (relative to most angiosperms) accounts for most of the size increase of the genome, but an additional 10% of the size increase is related to the large number of repeats found. The Pelargonium genome contains 35 times as many 31 bp or larger repeats than the unrearranged genome of Spinacia. Most of these repeats occur near the rearrangement hotspots, and 2 different associations of repeats are localized in these regions. These associations are characterized by full or partial duplications of several genes, most of which appear to be nonfunctional copies or pseudogenes. These duplications may also be linked to the disruption of at least 1 but possibly 2 or 3 operons. We propose simple models that account for the major rearrangements with a minimum of 8 IR boundary changes and 12 inversions in addition to several insertions of duplicated sequence.