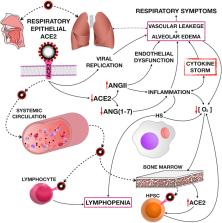 The emergency of SARS-CoV-2 in China started a novel challenge to the scientific community. As the virus turns pandemic, scientists try to map the cellular mechanisms and pathways of SARS-CoV-2 related to the pathogenesis of Coronavirus Disease 2019 (Covid-19). After transmembrane angiotensin-converting enzyme 2 (ACE2) has been found to be SARS-CoV-2 receptor, we hypothesized an immune-hematological mechanism for Covid-19 based on renin–angiotensin system (RAS) imbalance to explain clinical, laboratory and imaging findings on disease course. We believe that exaggerated activation of ACE/Angiotensin II (Ang II)/Angiotensin Type 1 (AT1) receptor RAS axis in line with reduction of ACE2/Angiotensin-(1-7)/Mas receptor may exert a pivotal role in the pathogenesis of Covid-19. In this perspective, we discuss potential mechanisms and evidence on this hypothesis.

Y. Fang,  F. Gao,  Z. Liu (2019)
To investigate the role of angiotensin-converting enzyme 2 (ACE2) in hyperoxic lung injury. Adult mice were exposed to 95% O2 for 72 h to induce hyperoxic lung injury, and simultaneously treated with ACE2 agonist diminazene aceturate (DIZE) or inhibitor MLN-4760. ACE2 expression/activity in lung tissue and angiotensin (Ang)-(1–7)/Ang II in bronchoalveolar lavage fluid (BALF), and the severity of hyperoxic lung injury were evaluated. The levels of inflammatory factors in BALF and lung tissue and the expression levels of phospho-p65, p65 and IkBα were measured. Oxidative parameter and antioxidant enzyme levels in lung tissue were measured to assess oxidative stress. Finally, the expression levels of nuclear factor-erythroid-2-related factor (Nrf2), NAD(P)H quinine oxidoreductase 1 (NQO1) and heme oxygenase-1 (HO-1) were measured using Western blotting. Hyperoxia treatment significantly decreased lung ACE2 expression/activity and increased the Ang II/Ang-(1–7) ratio, while co-treatment with hyperoxia and DIZE significantly increased lung ACE2 expression/activity and decreased the Ang II/Ang-(1–7) ratio. By contrast, co-treatment with hyperoxia and MLN-4760 significantly decreased lung ACE2 expression/activity and increased the Ang II/Ang-(1–7) ratio. Hyperoxia treatment induced significant lung injury, inflammatory response and oxidative stress, which were attenuated by DIZE but aggravated by MLN-4760. The NF-κB pathways were activated by hyperoxia and MLN-4760 but inhibited by DIZE. The Nrf2 pathway and its downstream proteins NQO1 and HO-1 were activated by DIZE but inhibited by MLN-4760. Activation of ACE2 can reduce the severity of hyperoxic lung injury by inhibiting inflammatory response and oxidative stress. ACE2 can inhibit the NF-κB pathway and activate the Nrf2/HO-1/NQO1 pathway, which may be involved in the underlying mechanism.

Atlas of tissue renin-angiotensin-aldosterone system in human: A transcriptomic meta-analysis

Ali Nehme,  Catherine Cerutti,  Nedra Dhaouadi … (2015)
Tissue renin-angiotensin-aldosterone system (RAAS) has attracted much attention because of its physiological and pharmacological implications; however, a clear definition of tissue RAAS is still missing. We aimed to establish a preliminary atlas for the organization of RAAS across 23 different normal human tissues. A set of 37 genes encoding classical and novel RAAS participants including gluco- and mineralo-corticoids were defined as extended RAAS (extRAAS) system. Microarray data sets containing more than 10 normal tissues were downloaded from the GEO database. R software was used to extract expression levels and construct dendrograms of extRAAS genes within each data set. Tissue co-expression modules were then extracted from reproducible gene clusters across data sets. An atlas of the maps of tissue-specific organization of extRAAS was constructed from gene expression and coordination data. Our analysis included 143 data sets containing 4933 samples representing 23 different tissues. Expression data provided an insight on the favored pathways in a given tissue. Gene coordination indicated the existence of tissue-specific modules organized or not around conserved core groups of transcripts. The atlas of tissue-specific organization of extRAAS will help better understand tissue-specific effects of RAAS. This will provide a frame for developing more effective and selective pharmaceuticals targeting extRAAS.

This is an open access article published by Portland Press Limited on behalf of the Biochemical Society and distributed under the Creative Commons Attribution License 4.0 (CC BY-NC-ND).