Ficus hispida Linn. (Family Moraceae), well-known beneficial medicinal shrub, has been traditionally used for the treatment of various diseases such as leukoderma.

The aim of the present study is to investigate the efficacy of F. hispida ethanolic leaves extract for antiproliferative, apoptotic, cell cycle blockade, and wound healing.

F. hispida leaves extract was treated with colorectal adenocarcinoma cancer cell line HT29 for 24 h with control. The cells were treated at varying concentration ranges of 15, 31, 62, 125, and 250 μg/ml each The cytotoxicity effect of leaves extract was studied by 3-[4, 5-dimethylthiazol-2-yl]-2, 5 diphenyltetrazolium bromide assay and their anticancer activity was further evaluated using cell cycle analysis and wound scratch assay.

The end antiproliferative result showed that HT-29 cell viability decreases in a concentration-dependent manner and the growth inhibitory effect (IC50) values are obtained at a concentration of 125 μg. The increase in number of apoptotic cell was observed after treating HT-29 cells with the sample in double-staining methods. G0/G1 phase of the cell cycle was significantly blocked by the test sample followed by the G2/M phase in a negligible manner. In vitro cell wound closure or contracture was not significant when compared the sample against control group. 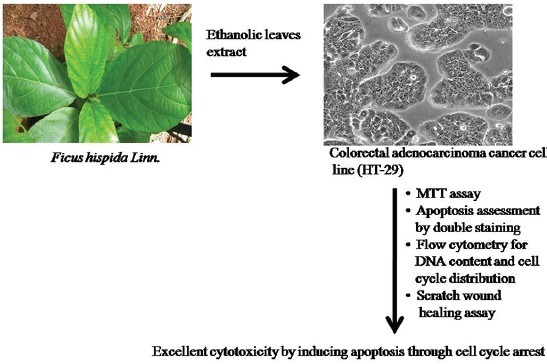 Sally E. Walker,  Christine M Pacold,  Allyson P. Hawkins … (2000)
The specific phosphoinositide 3-kinase (PI3K) inhibitors wortmannin and LY294002 have been invaluable tools for elucidating the roles of these enzymes in signal transduction pathways. The X-ray crystallographic structures of PI3Kgamma bound to these lipid kinase inhibitors and to the broad-spectrum protein kinase inhibitors quercetin, myricetin, and staurosporine reveal how these compounds fit into the ATP binding pocket. With a nanomolar IC50, wortmannin most closely fits and fills the active site and induces a conformational change in the catalytic domain. Surprisingly, LY294002 and the lead compound on which it was designed, quercetin, as well as the closely related flavonoid myricetin bind PI3K in remarkably different orientations that are related to each other by 180 degrees rotations. Staurosporine/PI3K interactions are reminiscent of low-affinity protein kinase/staurosporine complexes. These results provide a rich basis for development of isoform-specific PI3K inhibitors with therapeutic potential.

The growing burden of cancer in India: epidemiology and social context.

Mohandas K. Mallath,  David Taylor,  Rajendra Badwe … (2014)
Cancer can have profound social and economic consequences for people in India, often leading to family impoverishment and societal inequity. Reported age-adjusted incidence rates for cancer are still quite low in the demographically young country. Slightly more than 1 million new cases of cancer are diagnosed every year in a population of 1.2 billion. In age-adjusted terms this represents a combined male and female incidence of about a quarter of that recorded in western Europe. However, an estimated 600,000-700,000 deaths in India were caused by cancer in 2012. In age-standardised terms this figure is close to the mortality burden seen in high-income countries. Such figures are partly indicative of low rates of early-stage detection and poor treatment outcomes. Many cancer cases in India are associated with tobacco use, infections, and other avoidable causes. Social factors, especially inequalities, are major determinants of India's cancer burden, with poorer people more likely to die from cancer before the age of 70 years than those who are more affluent. In this first of three papers, we examine the complex epidemiology of cancer, the future burden, and the dominant sociopolitical themes relating to cancer in India.

Yanfeng Xu,  Ruiliang Ge,  Juan Du … (2009)
We investigated the response of human cervix adenocarcinoma HeLa cells to Corosolic acid (CRA) treatment. Our results showed that CRA significantly inhibited cell viability in both a dose- and a time-dependent manner. CRA treatment induced S cell-cycle arrest and caused apoptotic death in HeLa cells. We found that CRA increased in Bax/Bcl-2 ratios by up-regulating Bax expression, disrupted mitochondrial membrane potential and triggered the release of cytochrome c from mitochondria into the cytoplasm. Moreover, CRA treatment triggered the activation of caspase-8, -9 and -3 in HeLa cells. All these results indicate that CRA-induced apoptosis is associated with the activation of caspases via a mitochondrial pathway. Taken together, we believe that CRA could have strong potentials for clinical application in treating human cervix adenocarcinoma and improving cancer chemotherapy. 2009 Elsevier Ireland Ltd.