Estimating and validating disability-adjusted life years at the global level: a methodological framework for cancer 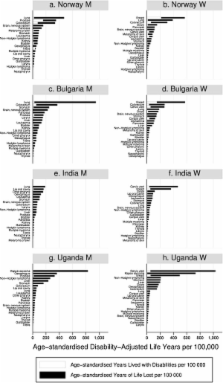 Disability-adjusted life years (DALYs) link data on disease occurrence to health outcomes, and they are a useful aid in establishing country-specific agendas regarding cancer control. The variables required to compute DALYs are however multiple and not readily available in many countries. We propose a methodology that derives global DALYs and validate variables and DALYs based on data from various cancer registries.

We estimated DALYs for four countries (Norway, Bulgaria, India and Uganda) within each category of the human development index (HDI). The following sources (indicators) were used: Globocan2008 (incidence and mortality), various cancer registries (proportion cured, proportion treated and duration of disease), treatment guidelines (duration of treatment), specific burden of disease studies (sequelae and disability weights), alongside expert opinion. We obtained country-specific population estimates and identified resource levels using the HDI, DALYs are computed as the sum of years of life lost and years lived with disabilities.

Using mortality:incidence ratios to estimate country-specific survival, and by applying the human development index we derived country-specific estimates of the proportion cured and the proportion treated. The fit between the estimates and observed data from the cancer registries was relatively good. The final DALY estimates were similar to those computed using observed values in Norway, and in WHO’s earlier global burden of disease study. Marked cross-country differences in the patterns of DALYs by cancer sites were observed. In Norway and Bulgaria, breast, colorectal, prostate and lung cancer were the main contributors to DALYs, representing 54% and 45%, respectively, of the totals. These cancers contributed only 27% and 18%, respectively, of total DALYs in India and Uganda.

Our approach resulted in a series of variables that can be used to estimate country-specific DALYs, enabling global estimates of DALYs and international comparisons that support priorities in cancer control.

Quantifying the burden of disease: the technical basis for disability-adjusted life years.

Michael J. Murray,  Conor Murray (1993)
Detailed assumptions used in constructing a new indicator of the burden of disease, the disability-adjusted life year (DALY), are presented. Four key social choices in any indicator of the burden of disease are carefully reviewed. First, the advantages and disadvantages of various methods of calculating the duration of life lost due to a death at each age are discussed. DALYs use a standard expected-life lost based on model life-table West Level 26. Second, the value of time lived at different ages is captured in DALYs using an exponential function which reflects the dependence of the young and the elderly on adults. Third, the time lived with a disability is made comparable with the time lost due to premature mortality by defining six classes of disability severity. Assigned to each class is a severity weight between 0 and 1. Finally, a three percent discount rate is used in the calculation of DALYs. The formula for calculating DALYs based on these assumptions is provided.

Expansion of cancer care and control in countries of low and middle income: a call to action.

Julio J Frenk,  Lincoln Chen,  Douglas W Blayney … (2010)
Substantial inequalities exist in cancer survival rates across countries. In addition to prevention of new cancers by reduction of risk factors, strategies are needed to close the gap between developed and developing countries in cancer survival and the effects of the disease on human suffering. We challenge the public health community's assumption that cancers will remain untreated in poor countries, and note the analogy to similarly unfounded arguments from more than a decade ago against provision of HIV treatment. In resource-constrained countries without specialised services, experience has shown that much can be done to prevent and treat cancer by deployment of primary and secondary caregivers, use of off-patent drugs, and application of regional and global mechanisms for financing and procurement. Furthermore, several middle-income countries have included cancer treatment in national health insurance coverage with a focus on people living in poverty. These strategies can reduce costs, increase access to health services, and strengthen health systems to meet the challenge of cancer and other diseases. In 2009, we formed the Global Task Force on Expanded Access to Cancer Care and Control in Developing Countries, which is composed of leaders from the global health and cancer care communities, and is dedicated to proposal, implementation, and evaluation of strategies to advance this agenda. Copyright © 2010 Elsevier Ltd. All rights reserved.

Estimates of the worldwide mortality from 25 cancers in 1990.

P Pisani,  F Bray,  D Parkin … (1999)
We present here worldwide estimates of annual mortality from all cancers and for 25 specific cancer sites around 1990. Crude and age-standardised mortality rates and numbers of deaths were computed for 23 geographical areas. Of the estimated 5.2 million deaths from cancer (excluding non-melanoma skin cancer), 55% (2.8 million) occurred in developing countries. The sex ratio is 1.33 (M:F), greater than that of incidence (1.13) due to the more favourable prognosis of cancer in women. Lung cancer is still the most common cause of death from cancer worldwide with over 900,000 deaths per year, followed by gastric cancer with over 600,000 deaths and colorectal and liver cancers accounting for at least 400,000 deaths each. In men, deaths from liver cancer exceed those due to colo-rectal cancer by 38%. Over 300,000 deaths of women are attributed to breast cancer, which remains the leading cause of death from cancer in women, followed by cancers of the stomach and lung with 230,000 annual deaths each. In men, the risk of dying from cancer is highest in eastern Europe, with an age-standardised rate for all sites of 205 deaths per 100,000 population. Mortality rates in all other developed regions are around 180. The only developing area with an overall rate of the same magnitude as that in developed countries is southern Africa. All of eastern Asia, including China, has mortality rates above the world average, as do all developed countries. The region of highest risk among women is northern Europe (age-standardised rate = 125.4), followed by North America, southern Africa and tropical South America. Only south-central and western Asia (Indian subcontinent, central Asia and the middle-eastern countries) and Northern Africa are well below the world average of 90 deaths per 100,000 population annually. Our results indicate the potential impact of preventive practices. It is estimated that 20% of all cancer deaths (1 million) could be prevented by eliminating tobacco smoking. Infectious agents account for a further 16% of deaths. Copyright 1999 Wiley-Liss, Inc.