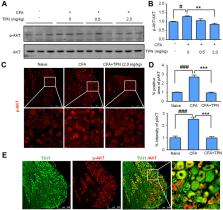 Currently, medical treatment of inflammatory pain is limited by a lack of safe and effective therapies. Triptonide (TPN), a major component of Tripterygium wilfordii Hook.f. with low toxicity, has been shown to have good anti-inflammatory and neuroprotective effects. The present study aims to investigate the effects of TPN on chronic inflammatory pain.

These data indicate that TPN attenuates CFA-induced pain potentially via inhibiting AKT-mediated pro-inflammatory cytokines production in DRG. TPN may be used for the treatment of chronic inflammatory pain.

R.-R. Ji,  A. Chamessian,  Y.-Q. Zhang (2016)
Acute pain is protective and a cardinal feature of inflammation. Chronic pain after arthritis, nerve injury, cancer, and chemotherapy is associated with chronic neuroinflammation, a local inflammation in the peripheral or central nervous system. Accumulating evidence suggests that non-neuronal cells such as immune cells, glial cells, keratinocytes, cancer cells, and stem cells play active roles in the pathogenesis and resolution of pain. We review how non-neuronal cells interact with nociceptive neurons by secreting neuroactive signaling molecules that modulate pain. Recent studies also suggest that bacterial infections regulate pain through direct actions on sensory neurons, and specific receptors are present in nociceptors to detect danger signals from infections. We also discuss new therapeutic strategies to control neuroinflammation for the prevention and treatment of chronic pain.

Sue Yun Hwang,  Ju Kim,  Kyoung-Woon Kim … (2004)
Recent studies of the pathogenesis of rheumatoid arthritis (RA) have revealed that both synovial fibroblasts and T cells participate in the perpetuation of joint inflammation as dynamic partners in a mutual activation feedback, via secretion of cytokines and chemokines that stimulate each other. In this study, we investigated the role of IL-17, a major Th1 cytokine produced by activated T cells, in the activation of RA synovial fibroblasts. Transcripts of IL-17R (IL-17 receptor) and IL-17RB (IL-17 receptor B) were present in fibroblast-like synoviocytes (FLS) of RA patients. IL-17R responded with increased expression upon in vitro stimulation with IL-17, while the level of IL-17RB did not change. IL-17 enhanced the production of IL-6 and IL-8 in FLS, as previously shown, but did not affect the synthesis of IL-15. IL-17 appears to be a stronger inducer of IL-6 and IL-8 than IL-15, and even exerted activation comparable to that of IL-1β in RA FLS. IL-17-mediated induction of IL-6 and IL-8 was transduced via activation of phosphatidylinositol 3-kinase/Akt and NF-κB, while CD40 ligation and p38 MAPK (mitogen-activated protein kinase) are not likely to partake in the process. Together these results suggest that IL-17 is capable of more than accessory roles in the activation of RA FLS and provide grounds for targeting IL-17-associated pathways in therapeutic modulation of arthritis inflammation.

Zhi-Ye Zhuang,  Haoxing Xu,  David Clapham … (2004)
Although the PI3K (phosphatidylinositol 3-kinase) pathway typically regulates cell growth and survival, increasing evidence indicates the involvement of this pathway in neural plasticity. It is unknown whether the PI3K pathway can mediate pain hypersensitivity. Intradermal injection of capsaicin and NGF produce heat hyperalgesia by activating their respective TRPV1 (transient receptor potential vanilloid receptor-1) and TrkA receptors on nociceptor sensory nerve terminals. We examined the activation of PI3K in primary sensory DRG neurons by these inflammatory agents and the contribution of PI3K activation to inflammatory pain. We further investigated the correlation between the PI3K and the ERK (extracellular signal-regulated protein kinase) pathway. Capsaicin and NGF induce phosphorylation of the PI3K downstream target AKT (protein kinase B), which is blocked by the PI3K inhibitors LY294002 and wortmannin, indicative of the activation of PI3K by both agents. ERK activation by capsaicin and NGF was also blocked by PI3K inhibitors. Similarly, intradermal capsaicin in rats activated PI3K and ERK in C-fiber DRG neurons and epidermal nerve fibers. Injection of PI3K or MEK (ERK kinase) inhibitors into the hindpaw attenuated capsaicin- and NGF-evoked heat hyperalgesia but did not change basal heat sensitivity. Furthermore, PI3K, but not ERK, inhibition blocked early induction of hyperalgesia. In acutely dissociated DRG neurons, the capsaicin-induced TRPV1 current was strikingly potentiated by NGF, and this potentiation was completely blocked by PI3K inhibitors and primarily suppressed by MEK inhibitors. Therefore, PI3K induces heat hyperalgesia, possibly by regulating TRPV1 activity, in an ERK-dependent manner. The PI3K pathway also appears to play a role that is distinct from ERK by regulating the early onset of inflammatory pain.