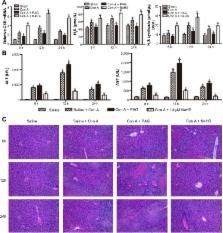 Aspartate aminotransferase, alanine aminotransferase, and pathological damage were significantly ameliorated by NaHS pretreatment. NaHS pretreatment significantly reduced the levels of interleukin-6 and tumor necrosis factor-α compared with those of the Con A group. The expression of Bcl-2, Bax, Beclin-1, and LC3-2, which play important roles in the apoptosis and autophagy pathways, were also clearly affected by NaHS. Furthermore, NaHS affected the p-mTOR and p-AKT.

Distinct classes of phosphatidylinositol 3'-kinases are involved in signaling pathways that control macroautophagy in HT-29 cells.

Blaine White,  Jonathon M Sullivan,  Donald DeGracia … (2000)
Brain ischemia and reperfusion engage multiple independently-fatal terminal pathways involving loss of membrane integrity in partitioning ions, progressive proteolysis, and inability to check these processes because of loss of general translation competence and reduced survival signal-transduction. Ischemia results in rapid loss of high-energy phosphate compounds and generalized depolarization, which induces release of glutamate and, in selectively vulnerable neurons (SVNs), opening of both voltage-dependent and glutamate-regulated calcium channels. This allows a large increase in cytosolic Ca(2+) associated with activation of mu-calpain, calcineurin, and phospholipases with consequent proteolysis of calpain substrates (including spectrin and eIF4G), activation of NOS and potentially of Bad, and accumulation of free arachidonic acid, which can induce depletion of Ca(2+) from the ER lumen. A kinase that shuts off translation initiation by phosphorylating the alpha-subunit of eukaryotic initiation factor-2 (eIF2alpha) is activated either by adenosine degradation products or depletion of ER lumenal Ca(2+). Early during reperfusion, oxidative metabolism of arachidonate causes a burst of excess oxygen radicals, iron is released from storage proteins by superoxide-mediated reduction, and NO is generated. These events result in peroxynitrite generation, inappropriate protein nitrosylation, and lipid peroxidation, which ultrastructurally appears to principally damage the plasmalemma of SVNs. The initial recovery of ATP supports very rapid eIF2alpha phosphorylation that in SVNs is prolonged and associated with a major reduction in protein synthesis. High catecholamine levels induced by the ischemic episode itself and/or drug administration down-regulate insulin secretion and induce inhibition of growth-factor receptor tyrosine kinase activity, effects associated with down-regulation of survival signal-transduction through the Ras pathway. Caspase activation occurs during the early hours of reperfusion following mitochondrial release of caspase 9 and cytochrome c. The SVNs find themselves with substantial membrane damage, calpain-mediated proteolytic degradation of eIF4G and cytoskeletal proteins, altered translation initiation mechanisms that substantially reduce total protein synthesis and impose major alterations in message selection, down-regulated survival signal-transduction, and caspase activation. This picture argues powerfully that, for therapy of brain ischemia and reperfusion, the concept of single drug intervention (which has characterized the approaches of basic research, the pharmaceutical industry, and clinical trials) cannot be effective. Although rigorous study of multi-drug protocols is very demanding, effective therapy is likely to require (1) peptide growth factors for early activation of survival-signaling pathways and recovery of translation competence, (2) inhibition of lipid peroxidation, (3) inhibition of calpain, and (4) caspase inhibition. Examination of such protocols will require not only characterization of functional and histopathologic outcome, but also study of biochemical markers of the injury processes to establish the role of each drug.