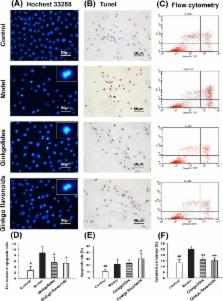 To explore the neuroprotective mechanism of Ginkgolides or Ginkgo flavonoids on the TNF-α induced apoptosis of cultured rat hippocampal neurons.

Ginkgolides and Ginkgo flavonoids might protect against apoptosis of hippocampal neurons through inhibiting death receptor pathway or mitochondrial pathway under TNF-α background.

S. Shalini,  L Dorstyn,  S Dawar … (2015)
Caspases are proteases with a well-defined role in apoptosis. However, increasing evidence indicates multiple functions of caspases outside apoptosis. Caspase-1 and caspase-11 have roles in inflammation and mediating inflammatory cell death by pyroptosis. Similarly, caspase-8 has dual role in cell death, mediating both receptor-mediated apoptosis and in its absence, necroptosis. Caspase-8 also functions in maintenance and homeostasis of the adult T-cell population. Caspase-3 has important roles in tissue differentiation, regeneration and neural development in ways that are distinct and do not involve any apoptotic activity. Several other caspases have demonstrated anti-tumor roles. Notable among them are caspase-2, -8 and -14. However, increased caspase-2 and -8 expression in certain types of tumor has also been linked to promoting tumorigenesis. Increased levels of caspase-3 in tumor cells causes apoptosis and secretion of paracrine factors that promotes compensatory proliferation in surrounding normal tissues, tumor cell repopulation and presents a barrier for effective therapeutic strategies. Besides this caspase-2 has emerged as a unique caspase with potential roles in maintaining genomic stability, metabolism, autophagy and aging. The present review focuses on some of these less studied and emerging functions of mammalian caspases.

Caspases at the crossroads of immune-cell life and death.

Erin Siegel (2006)
Caspases are responsible for crucial aspects of inflammation and immune-cell death that are disrupted in a number of genetic autoimmune and autoinflammatory diseases. The caspase family of proteases can be divided into pro-apoptotic and pro-inflammatory members based on their substrate specificity and participation in separate signalling cascades. However, as discussed here, evidence has emerged over the past few years that a number of the caspases thought to be involved solely in apoptosis also contribute to specific aspects of immune-cell development, activation and differentiation, and can even protect cells from some forms of cell death.

Ginkgo biloba extracts: a review of the pharmacokinetics of the active ingredients.

Christian Ude,  Manfred Schubert-Zsilavecz,  Mario Wurglics (2013)
Ginkgo biloba is among the most favourite and best explored herbal drugs. Standardized extracts of Ginkgo biloba represent the only herbal alternative to synthetic antidementia drugs in the therapy of cognitive decline and Alzheimer's diseases. The clinical efficiency of such standardized Ginkgo biloba extracts (GBE) is still controversial, but authors of numerous international clinical studies recommended the use of GBE in the described therapies.Extracts of Ginkgo biloba are a mixture of substances with a wide variety of physical and chemical properties and activities. Numerous pharmacological investigations lead to the conclusion that the terpene trilactones (TTL) and the flavonoids of GBE are responsible for the main pharmacological effects of the extract in the therapy of cognitive decline. Therefore, the quality of GBE products must be oriented on a defined quantity of TTL and flavonoids. Furthermore, because of their toxic potential the amount of ginkgolic acid should be less than 5 ppm.However, data on pharmacokinetics and bioavailability, especially related to the central nervous system (CNS), which is the target tissue, are relatively rare. A few investigations characterize the TTL and flavonoids of Ginkgo biloba pharmacokinetically in plasma and in the brain. Recent investigations show that significant levels of TTL and Ginkgo biloba flavonoids cross the blood-brain barrier and enter the CNS of rats after oral application of GBE. Knowledge about the pharmacokinetic behaviour of these substances is necessary to discuss the pharmacological results on a more realistic basis.

These authors have contributed equally to this work.