Morphology-based taxonomic re-assessment of the Arctic lamprey, Lethenteron camtschaticum (Tilesius, 1811) and taxonomic position of other members of the genus 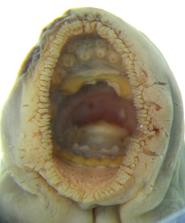 The lamprey genus Lethenteron Creaser & Hubbs, 1922 is widespread across Eurasia and North America, but the number and distribution of its constituent species is not firmly established. After a morphological examination of extant type material of the currently recognized species and their synonyms, Lethenteron mitsukurii (Hatta, 1901) is resurrected with Le. matsubarai Vladykov & Kott, 1978 as its junior synonym. Amongst nonparasitic species Le. reissneri (Dybowski, 1869) and Le. mitsukurii are confirmed as present in Japan and the former is also present on Sakhalin. An in-depth study of large samples of nonparasitic lamprey adults from Japan and Sakhalin Island is needed to determine whether the lower trunk myomere (< 66) individuals from these areas represent one or more undescribed species, or Le. mitsukurii , or Le. reissneri , or a mixture of these three alternatives. The material from the Anadyr Estuary identified by Berg (1931, 1948) as Lampetra japonica kessleri has been re-identified as Le. camtschaticum and there is no evidence that Le. kessleri occurs there. Lethenteron reissneri is reported from the Angara River system, Yenisei River drainage, Russia. Lethenteron alaskense Vladykov & Kott, 1978 is provisionally considered to be a junior synonym of Le. kessleri (Anikin, 1905). Petromyzon ernstii Dybowski, 1872, Ammocoetes aureus Bean, 1881, Petromyzon dentex Anikin, 1905, Lampetra mitsukurii major Hatta, 1911, and Lampetra japonica septentrionalis Berg, 1931 are junior synonyms of Petromyzon marinus camtschaticus Tilesius, 1811. A key is provided to adults of the six species recognized as belonging in the genus Lethenteron .

Richard L. Mayden,  Louis Bernatchez,  Robert Hanner … (2011)
Freshwater ecosystems are being heavily exploited and degraded by human activities all over the world, including in North America, where fishes and fisheries are strongly affected. Despite centuries of taxonomic inquiry, problems inherent to species identification continue to hamper the conservation of North American freshwater fishes. Indeed, nearly 10% of species diversity is thought to remain undescribed. To provide an independent calibration of taxonomic uncertainty and to establish a more accessible molecular identification key for its application, we generated a standard reference library of mtDNA sequences (DNA barcodes) derived from expert-identified museum specimens for 752 North American freshwater fish species. This study demonstrates that 90% of known species can be delineated using barcodes. Moreover, it reveals numerous genetic discontinuities indicative of independently evolving lineages within described species, which points to the presence of morphologically cryptic diversity. From the 752 species analyzed, our survey flagged 138 named species that represent as many as 347 candidate species, which suggests a 28% increase in species diversity. In contrast, several species of parasitic and nonparasitic lampreys lack such discontinuity and may represent alternative life history strategies within single species. Therefore, it appears that the current North American freshwater fish taxonomy at the species level significantly conceals diversity in some groups, although artificially creating diversity in others. In addition to providing an easily accessible digital identification system, this study identifies 151 fish species for which taxonomic revision is required.

This study was funded by research grants to the corresponding author from the Canadian Museum of Nature.