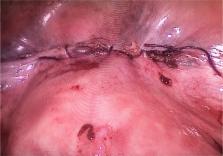 Pregnancy in a cesarean scar is the rarest form of an ectopic pregnancy. The treatment for cesarean scar pregnancy mainly includes systemic methotrexate and uterine artery embolization. Here, we reported a case of cesarean scar pregnancy treated by curettage and aspiration guided by laparoscopy. The treatment plan included two phases. Three days after a combination of methotrexate and mifepristone was administered, the gestational sac was removed under laparoscopy, which enabled a successful treatment for the unruptured ectopic pregnancy in a previous cesarean scar and made it possible to preserve the reproductive capability of the patient.

A Aktas,  M. Aban,  O Pata … (2005)
Pregnancy in previous cesarean scar is the rarest form of ectopic pregnancy. All reported cases in the literature that were treated with uterine curettage either become unsuccessful or complicated. We aimed to present a case of cesarean scar ectopic pregnancy that was successfully treated with suction curettage without any additional therapy. A 32-year-old asymptomatic woman, gravida 2, para 1 was referred to our hospital with the possible diagnosis of cervical ectopic pregnancy. Transvaginal and transabdominal sonographic examination revealed the diagnosis of viable ectopic pregnancy in a previous cesarean scar. Suction curettage with carman canulles was performed under transabdominal ultrasonographic guidance. beta-hCG decreased progressively postoperatively. Suction curettage under ultrasonography guidance can be used in termination of selected cases (early diagnosed, without symptoms that necessitates emergency intervention) of cesarean scar pregnancy.

C Michener,  Mary E. Dickinson (2009)
To examine the characteristics, management and outcomes of 13 caesarean scar pregnancies (CSPs) at a single tertiary obstetric centre over a five-year period. Retrospective cohort study. Cases were identified from interrogation of the institutional database with patient characteristics, management and outcome data extracted from the medical record chart and ultrasound image review. Thirteen cases of CSP were identified from 2002-2007. Median maternal age was 34 years (interquartile range (IQR) 32.2, 35.2) with a median parity of 2 (IQR 1, 3). In nine of 13 (69%) cases there was one prior caesarean section and > or = 2 in four of 13 (31%). The median gestation at diagnosis was 6.8 weeks (range 5.5-11.5). Vaginal bleeding was the most common presenting symptom (nine of 13 cases). The final diagnosis was made by ultrasound in 11 of 13 cases (84.6%) but the diagnosis was delayed in seven of 13 cases, including four that had an earlier ultrasound assessment. Treatment was with systemic methotrexate in seven cases with five (71.4%) requiring no further intervention. One case received intragestational sac and systemic methotrexate with a delayed hysterectomy as a result of molar complications. Two cases were treated with uncomplicated curettage and three by hysterectomy. Four women are known to have had pregnancies following the CSP. The diagnosis of CSP can be challenging, and awareness of this condition is needed, particularly as the incidence is increasing. There does not appear to be a clear association between number of prior caesarean deliveries and CSPs. No consistent management strategy was evident in our series, being based predominantly on patient factors and consultant resources rather than CSP features.

X. G. Qiu,  Meimi Zhao,  J Chi … (2011)
This study investigated bilateral uterine artery chemoembolization (BUACE) combined with dilation and curettage (D&C) in caesarean scar pregnancy (CSP). Nineteen women with CSP were referred for interventional radiology. In 13 patients, BUACE was performed before D&C, following a diagnosis of CSP. A further six patients received BUACE for massive vaginal bleeding after D&C for inevitable miscarriage; the diagnosis of CSP was subsequently confirmed ultrasonographically. BUACE of the uterine arteries was performed using gelfoam particles following intra-arterial infusion of 100 mg/m(2) methotrexate. BUACE was technically successful and immediate haemostasis was achieved in all patients. Blood loss was significantly greater during D&C undertaken before BUACE compared with D&C after BUACE, but this bleeding was controlled by BUACE. No patient required further surgical intervention and there were no severe complications. The gestational sac and placenta could no longer be detected ultrasonographically and the menstrual cycle returned to normal 2-3 months after treatment in all patients. BUACE followed by D&C seems to be a safe and effective treatment for CSP and should be considered as a treatment of choice.