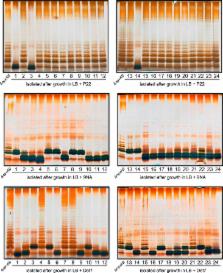 The Salmonella enterica opvAB operon is a horizontally-acquired locus that undergoes phase variation under Dam methylation control. The OpvA and OpvB proteins form intertwining ribbons in the inner membrane. Synthesis of OpvA and OpvB alters lipopolysaccharide O-antigen chain length and confers resistance to bacteriophages 9NA (Siphoviridae), Det7 (Myoviridae), and P22 (Podoviridae). These phages use the O-antigen as receptor. Because opvAB undergoes phase variation, S. enterica cultures contain subpopulations of opvAB OFF and opvAB ON cells. In the presence of a bacteriophage that uses the O-antigen as receptor, the opvAB OFF subpopulation is killed and the opvAB ON subpopulation is selected. Acquisition of phage resistance by phase variation of O-antigen chain length requires a payoff: opvAB expression reduces Salmonella virulence. However, phase variation permits resuscitation of the opvAB OFF subpopulation as soon as phage challenge ceases. Phenotypic heterogeneity generated by opvAB phase variation thus preadapts Salmonella to survive phage challenge with a fitness cost that is transient only.

A tradeoff can increase the adaptive capacity of an organism at the expense of lowering the fitness conferred by specific traits. This study describes a tradeoff that confers bacteriophage resistance in Salmonella enterica at the expense of reducing its pathogenic capacity. Phase variation of the opvAB operon creates two subpopulations of bacterial cells, each with a distinct lipopolysaccharide structure. One subpopulation is large and virulent but sensitive to phages that use the lipopolysaccharide O-antigen as receptor, while the other is small and avirulent but phage resistant. In the presence of a phage that targets the O-antigen, only the avirulent subpopulation survives. However, phase variation permits resuscitation of the virulent opvAB OFF subpopulation as soon as phage challenge ceases. This transient tradeoff may illustrate the adaptive value of epigenetic mechanisms that generate bacterial subpopulations in a reversible manner.

Edo Kussell,  Stanislas Leibler (2005)
Organisms in fluctuating environments must constantly adapt their behavior to survive. In clonal populations, this may be achieved through sensing followed by response or through the generation of diversity by stochastic phenotype switching. Here we show that stochastic switching can be favored over sensing when the environment changes infrequently. The optimal switching rates then mimic the statistics of environmental changes. We derive a relation between the long-term growth rate of the organism and the information available about its fluctuating environment.

Bistability, epigenetics, and bet-hedging in bacteria.

Jan-Willem Veening,  Wiep Klaas Smits,  Oscar P. Kuipers (2007)
Clonal populations of microbial cells often show a high degree of phenotypic variability under homogeneous conditions. Stochastic fluctuations in the cellular components that determine cellular states can cause two distinct subpopulations, a property called bistability. Phenotypic heterogeneity can be readily obtained by interlinking multiple gene regulatory pathways, effectively resulting in a genetic logic-AND gate. Although switching between states can occur within the cells' lifetime, cells can also pass their cellular state over to the next generation by a mechanism known as epigenetic inheritance and thus perpetuate the phenotypic state. Importantly, heterogeneous populations can demonstrate increased fitness compared with homogeneous populations. This suggests that microbial cells employ bet-hedging strategies to maximize survival. Here, we discuss the possible roles of interlinked bistable networks, epigenetic inheritance, and bet-hedging in bacteria.

Richard Losick,  David Dubnau (2006)
Gene expression in bacteria is traditionally studied from the average behaviour of cells in a population, which has led to the assumption that under a particular set of conditions all cells express genes in an approximately uniform manner. The advent of methods for visualizing gene expression in individual cells reveals, however, that populations of genetically identical bacteria are sometimes heterogeneous, with certain genes being expressed in a non-uniform manner across the population. In some cases, heterogeneity is manifested by the bifurcation into distinct subpopulations, and we adopt the common usage, referring to this phenomenon as bistability. Here we consider four cases of bistability, three from Bacillus subtilis and one from Escherichia coli, with an emphasis on random switching mechanisms that generate alternative cell states and the biological significance of phenotypic heterogeneity. A review describing additional examples of bistability in bacteria has been published recently.

This work was supported by grants BIO2013-44220-R (to JC) and BIO2013-46281-P (to FGdP) from the Ministerio de Economía e Innovación of Spain and the European Regional Fund. The funders had no role in study design, data collection and analysis, decision to publish, or preparation of the manuscript.

Data Availability All relevant data are within the paper and its Supporting Information files.
Data availability:
ScienceOpen disciplines: Genetics