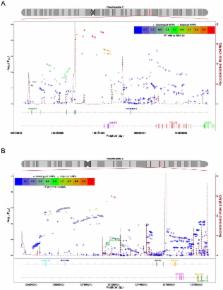 Osteoporotic fracture is a major cause of morbidity and mortality worldwide. Low bone mineral density (BMD) is a major predisposing factor to fracture and is known to be highly heritable. Site-, gender-, and age-specific genetic effects on BMD are thought to be significant, but have largely not been considered in the design of genome-wide association studies (GWAS) of BMD to date. We report here a GWAS using a novel study design focusing on women of a specific age (postmenopausal women, age 55–85 years), with either extreme high or low hip BMD (age- and gender-adjusted BMD z-scores of +1.5 to +4.0, n = 1055, or −4.0 to −1.5, n = 900), with replication in cohorts of women drawn from the general population (n = 20,898). The study replicates 21 of 26 known BMD–associated genes. Additionally, we report suggestive association of a further six new genetic associations in or around the genes CLCN7, GALNT3, IBSP, LTBP3, RSPO3, and SOX4, with replication in two independent datasets. A novel mouse model with a loss-of-function mutation in GALNT3 is also reported, which has high bone mass, supporting the involvement of this gene in BMD determination. In addition to identifying further genes associated with BMD, this study confirms the efficiency of extreme-truncate selection designs for quantitative trait association studies.

Osteoporotic fracture is a major cause of early mortality and morbidity in the community. To identify genes associated with osteoporosis, we have performed a genome-wide association study. In order to improve study power and to address the demographic group of highest risk from osteoporotic fracture, we have used a unique study design, studying 1,955 postmenopausal women with either extreme high or low hip bone mineral density. We then confirmed our findings in 20,898 women from the general population. Our study replicated 21 of 26 known osteoporosis genes, and it identified a further six novel loci (in or nearby CLCN7, GALNT3, IBSP, LTBP3, RSPO3, and SOX4). For one of these loci, GALTN3, we demonstrate in a mouse model that a loss-of-function genetic mutation in GALNT3 causes high bone mass. These findings report novel mechanisms by which osteoporosis can arise, and they significantly add to our understanding of the aetiology of the disease.

Yun Li,  Cristen Willer,  Serena Sanna … (2009)
Genotype imputation is now an essential tool in the analysis of genome-wide association scans. This technique allows geneticists to accurately evaluate the evidence for association at genetic markers that are not directly genotyped. Genotype imputation is particularly useful for combining results across studies that rely on different genotyping platforms but also increases the power of individual scans. Here, we review the history and theoretical underpinnings of the technique. To illustrate performance of the approach, we summarize results from several gene mapping studies. Finally, we preview the role of genotype imputation in an era when whole genome resequencing is becoming increasingly common.

Publisher ID: 10-PLGE-RA-NV-4180R4
DOI: 10.1371/journal.pgen.1001372
PMC ID: 3080863
PubMed ID: 21533022
Copyright statement: Duncan et al. This is an open-access article distributed under the terms of the Creative Commons Attribution License, which permits unrestricted use, distribution, and reproduction in any medium, provided the original author and source are credited.