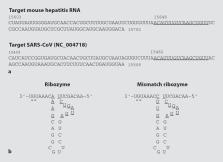 Severe acute respiratory syndrome (SARS) is a severe pulmonary infectious disease caused by a novel coronavirus. To develop an effective and specific medicine targeting the SARS-coronavirus (CoV), a chimeric DNA-RNA hammerhead ribozyme was designed and synthesized using a sequence homologous with the mouse hepatitis virus (MHV).

Chimeric DNA-RNA hammerhead ribozyme targeting MHV and SARS-CoV were designed and synthesized. To confirm its activity, in vitro cleavage reactions were performed with the synthesized ribozyme. Effects of the chimeric ribozyme were evaluated on multiplication of MHV. Effects of the chimeric ribozyme on expression of SARS-CoV were evaluated in cultured 3T3 cells.

These findings indicate that the synthetic chimeric DNA-RNA ribozyme could provide a feasible treatment for SARS.

F Milligan,  O Uhlenbeck,  Duncan Groebe … (1987)
A method is described to synthesize small RNAs of defined length and sequence using T7 RNA polymerase and templates of synthetic DNA which contain the T7 promoter. Partially single stranded templates which are base paired only in the -17 to +1 promoter region are just as active in transcription as linear plasmid DNA. Runoff transcripts initiate at a unique, predictable position, but may have one nucleotide more or less on the 3' terminus. In addition to the full length products, the reactions also yield a large amount of smaller oligoribonucleotides in the range from 2 to 6 nucleotides which appear to be the result of abortive initiation events. Variants in the +1 to +6 region of the promoter are transcribed with reduced efficiency but increase the variety of RNAs which can be made. Transcription reaction conditions have been optimized to allow the synthesis of milligram amounts of virtually any RNA from 12 to 35 nucleotides in length.

The epidemiology of severe acute respiratory syndrome in the 2003 Hong Kong epidemic: an analysis of all 1755 patients.

Gabriel Leung,  Anthony J. Hedley,  Lai-Ming Ho … (2004)
As yet, no one has written a comprehensive epidemiologic account of a severe acute respiratory syndrome (SARS) outbreak from an affected country. To provide a comprehensive epidemiologic account of a SARS outbreak from an affected territory. Epidemiologic analysis. The 2003 Hong Kong SARS outbreak. All 1755 cases and 302 deaths. Sociodemographic characteristics; infection clusters by time, occupation, setting, and workplace; and geospatial relationships were determined. The mean and variance in the time from infection to onset (incubation period) were estimated in a small group of patients with known exposure. The mean and variance in time from onset to admission, from admission to discharge, or from admission to death were calculated. Logistic regression was used to identify important predictors of case fatality. 49.3% of patients were infected in clinics, hospitals, or elderly or nursing homes, and the Amoy Gardens cluster accounted for 18.8% of cases. The ratio of women to men among infected individuals was 5:4. Health care workers accounted for 23.1% of all reported cases. The estimated mean incubation period was 4.6 days (95% CI, 3.8 to 5.8 days). Mean time from symptom onset to hospitalization varied between 2 and 8 days, decreasing over the course of the epidemic. Mean time from onset to death was 23.7 days (CI, 22.0 to 25.3 days), and mean time from onset to discharge was 26.5 days (CI, 25.8 to 27.2 days). Increasing age, male sex, atypical presenting symptoms, presence of comorbid conditions, and high lactate dehydrogenase level on admission were associated with a greater risk for death. Estimates of the incubation period relied on statistical assumptions because few patients had known exposure times. Temporal changes in case management as the epidemic progressed, unavailable treatment information, and several potentially important factors that could not be thoroughly analyzed because of the limited sample size complicate interpretation of factors related to case fatality. This analysis of the complete data on the 2003 SARS epidemic in Hong Kong has revealed key epidemiologic features of the epidemic as it evolved.