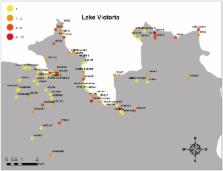 Anopheles gambiae s.s., Anopheles arabiensis, and Anopheles funestus s.s. are the most important species for malaria transmission. Pyrethroid resistance of these vector mosquitoes is one of the main obstacles against effective vector control. The objective of the present study was to monitor the pyrethroid susceptibility in the 3 major malaria vectors in a highly malaria endemic area in western Kenya and to elucidate the mechanisms of pyrethroid resistance in these species. Gembe East and West, Mbita Division, and 4 main western islands in the Suba district of the Nyanza province in western Kenya were used as the study area. Larval and adult collection and bioassay were conducted, as well as the detection of point mutation in the voltage-gated sodium channel (1014L) by using direct DNA sequencing. A high level of pyrethroid resistance caused by the high frequency of point mutations (L1014S) was detected in An. gambiae s.s. In contrast, P450-related pyrethroid resistance seemed to be widespread in both An. arabiensis and An. funestus s.s. Not a single L1014S mutation was detected in these 2 species. A lack of cross-resistance between DDT and permethrin was also found in An. arabiensis and An. funestus s.s., while An. gambiae s.s. was resistant to both insecticides. It is noteworthy that the above species in the same area are found to be resistant to pyrethroids by their unique resistance mechanisms. Furthermore, it is interesting that 2 different resistance mechanisms have developed in the 2 sibling species in the same area individually. The cross resistance between permethrin and DDT in An. gambiae s.s. may be attributed to the high frequency of kdr mutation, which might be selected by the frequent exposure to ITNs. Similarly, the metabolic pyrethroid resistance in An. arabiensis and An. funestus s.s. is thought to develop without strong selection by DDT.

Identification of single specimens of the Anopheles gambiae complex by the polymerase chain reaction.

Bridget Collins,  William Brogdon,  John Scott (1993)
A ribosomal DNA-polymerase chain reaction (PCR) method has been developed for species identification of individuals of the five most widespread members of the Anopheles gambiae complex, a group of morphologically indistinguishable sibling mosquito species that includes the major vectors of malaria in Africa. The method, which is based on species-specific nucleotide sequences in the ribosomal DNA intergenic spacers, may be used to identify both species and interspecies hybrids, regardless of life stage, using either extracted DNA or fragments of a specimen. Intact portions of a mosquito as small as an egg or the segment of one leg may be placed directly into the PCR mixture for amplification and analysis. The method uses a cocktail of five 20-base oligonucleotides to identify An. gambiae, An. arabiensis, An. quadriannnulatus, and either An. melas in western Africa or An. melas in eastern and southern Africa.

Publisher ID: PONE-D-11-07365
DOI: 10.1371/journal.pone.0022574
PMC ID: 3154902
PubMed ID: 21853038
Copyright statement: Kawada et al. This is an open-access article distributed under the terms of the Creative Commons Attribution License, which permits unrestricted use, distribution, and reproduction in any medium, provided the original author and source are credited.