Effectiveness of HBV Vaccination in Infants and Prediction of HBV Prevalence Trend under New Vaccination Plan: Findings of a Large-Scale Investigation 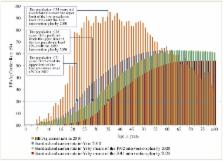 Hepatitis B virus (HBV) infection remains a severe public health problem. Investigating its prevalence and trends is essential to prevention.

To evaluate the effectiveness of HBV vaccination under the 1992 Intervention Program for infants and predicted HBV prevalence trends under the 2011 Program for all ages. We conducted a community-based investigation of 761,544 residents of 12 counties in Zhejiang Province selected according to their location, population density, and economic development. The HBV prevalence trends were predicted by a time-shifting approach. HBV surface antigen (HBsAg) and alanine amino transferase (ALT) were determined.

Of the 761,544 persons screened for HBsAg, 54,132 were positive (adjusted carrier rate 6.13%); 9,455 had both elevated ALT and a positive HBsAg test (standardized rate 1.18%). The standardized HBsAg carrier rate for persons aged ≤20 years was 1.51%. Key factors influencing HBV infection were sex, age, family history, drinking, smoking, employment as a migrant worker, and occupation. With the vaccination program implemented in 2011, we predict that by 2020, the HBsAg carrier rate will be 5.27% and that for individuals aged ≤34 years will reach the 2% upper limit of low prevalence according to the WHO criteria, with a standardized rate of 1.86%.

The national HBV vaccination program for infants implemented in 1992 has greatly reduced the prevalence of HBV infection. The 2011 program is likely to reduce HBV infection in Zhejiang Province to a low moderate prevalence, and perinatal transmission is expected to be controlled by 2020.

Yun-Fan Liaw, Chia-Ming Chu (2009)
Since the introduction of the hepatitis B vaccine and other preventive measures, the worldwide prevalence of hepatitis B infection has fallen. However, chronic infection remains a challenging global health problem, with more than 350 million people chronically infected and at risk of hepatic decompensation, cirrhosis, and hepatocellular carcinoma. An improved understanding of hepatitis B virology, immunology, and the natural course of chronic infection, has identified hepatitis B virus replication as the key driver of immune-mediated liver injury and disease progression. The approval of potent oral antiviral agents has revolutionised hepatitis B treatment since 1998. Conventional and pegylated interferon alfa and nucleoside and nucleotide analogues are widely authorised treatments, and monotherapy with these drugs greatly suppresses virus replication, reduces hepatitis activity, and halts disease progression. However, hepatitis B virus is rarely eliminated, and drug resistance is a major drawback during long term therapy. The development of new drugs and strategies is needed to improve treatment outcomes.

Xiaofeng Liang, Shengli Bi, Weizhong Yang … (2009)
To determine the prevalence of hepatitis B surface antigen (HBsAg), hepatitis B surface antibody (anti-HBs), and hepatitis B core anti-body (anti-HBc) in a representative population in China 14 years after introduction of hepatitis B vaccination of infants. National serosurvey, with participants selected by multi-stage random sampling. Demographics and hepatitis B vaccination history collected by questionnaire and review of vaccination records, and serum tested for HBsAg, antibody to anti-HBc and anti-HBs by ELISA. The weighted prevalences of HBsAg, anti-HBs and anti-HBc for Chinese population aged 1-59 years were 7.2%, 50.1%, 34.1%, respectively. HBsAg prevalence was greatly diminished among those age <15 years compared to that found in the 1992 national serosurvey, and among children age <5 years was only 1.0% (90% reduction). Reduced HBsAg prevalence was strongly associated with vaccination among all age groups. HBsAg risk in adults was associated with male sex, Western region, and certain ethnic groups and occupations while risk in children included birth at home or smaller hospitals, older age, and certain ethnic groups (Zhuang and other). China has already reached the national goal of reducing HBsAg prevalence to less than 1% among children under 5 years and has prevented an estimated 16-20 million HBV carriers through hepatitis B vaccination of infants. Immunization program should be further strengthened to reach those remaining at highest risk.

Hepatitis B in China.

This study was supported in part by grants from the Mega-Project for National Science and Technology Development under the “11th and 12th Five-Year Plan of China” (2009ZX10004-901, 2011ZX10004-901), the National Science and Technology Support Program of “11th Five-Year Plan” (2008BAH27B00), and the National Natural Science Foundation of China (81001271). The funders had no role in study design, data collection and analysis, decision to publish, or preparation of the manuscript.