An update on the CNS manifestations of neurofibromatosis type 2 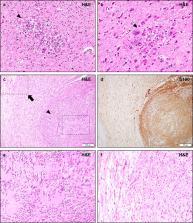 Neurofibromatosis type II (NF2) is a tumor predisposition syndrome characterized by the development of distinctive nervous system lesions. NF2 results from loss-of-function alterations in the NF2 gene on chromosome 22, with resultant dysfunction of its protein product merlin. NF2 is most commonly associated with the development of bilateral vestibular schwannomas; however, patients also have a predisposition to development of other tumors including meningiomas, ependymomas, and peripheral, spinal, and cranial nerve schwannomas. Patients may also develop other characteristic manifestations such as ocular lesions, neuropathies, meningioangiomatosis, and glial hamartia. NF2 has a highly variable clinical course, with some patients exhibiting a severe phenotype and development of multiple tumors at an early age, while others may be nearly asymptomatic throughout their lifetime. Despite the high morbidity associated with NF2 in severe cases, management of NF2-associated lesions primarily consists of surgical resection and treatment of symptoms, and there are currently no FDA-approved systemic therapies that address the underlying biology of the syndrome. Refinements to the diagnostic criteria of NF2 have been proposed over time due to increasing understanding of clinical and molecular data. Large-population studies have demonstrated that some features such as the development of gliomas and neurofibromas, currently included as diagnostic criteria, may require further clarification and modification. Meanwhile, burgeoning insights into the molecular biology of NF2 have shed light on the etiology and highly variable severity of the disease and suggested numerous putative molecular targets for therapeutic intervention. Here, we review the clinicopathologic features of NF2, current understanding of the molecular biology of NF2, particularly with regard to central nervous system lesions, ongoing therapeutic studies, and avenues for further research.

Ahmet Caglayan,  Baran Yılmaz,  Eric Holland … (2013)
We report genomic analysis of 300 meningiomas, the most common primary brain tumors, leading to the discovery of mutations in TRAF7, a proapoptotic E3 ubiquitin ligase, in nearly one-fourth of all meningiomas. Mutations in TRAF7 commonly occurred with a recurrent mutation (K409Q) in KLF4, a transcription factor known for its role in inducing pluripotency, or with AKT1(E17K), a mutation known to activate the PI3K pathway. SMO mutations, which activate Hedgehog signaling, were identified in ~5% of non-NF2 mutant meningiomas. These non-NF2 meningiomas were clinically distinctive-nearly always benign, with chromosomal stability, and originating from the medial skull base. In contrast, meningiomas with mutant NF2 and/or chromosome 22 loss were more likely to be atypical, showing genomic instability, and localizing to the cerebral and cerebellar hemispheres. Collectively, these findings identify distinct meningioma subtypes, suggesting avenues for targeted therapeutics.

K Hoang-Xuan,  Anthony M. Sanson,  J Zucman … (1993)
Neurofibromatosis type 2 (NF2) is a monogenic dominantly inherited disease predisposing carriers to develop nervous system tumours. To identify the genetic defect, the region between two flanking polymorphic markers on chromosome 22 was cloned and several genes identified. One is the site of germ-line mutations in NF2 patients and of somatic mutations in NF2-related tumours. Its deduced product has homology with proteins at the plasma membrane and cytoskeleton interface, a previously unknown site of action of tumour suppressor genes in humans.

A novel moesin-, ezrin-, radixin-like gene is a candidate for the neurofibromatosis 2 tumor suppressor.

K Pulaski,  D Parry,  J A Trofatter … (1993)
Neurofibromatosis 2 (NF2) is a dominantly inherited disorder characterized by the occurrence of bilateral vestibular schwannomas and other central nervous system tumors including multiple meningiomas. Genetic linkage studies and investigations of both sporadic and familial tumors suggest that NF2 is caused by inactivation of a tumor suppressor gene in chromosome 22q12. We have identified a candidate gene for the NF2 tumor suppressor that has suffered nonoverlapping deletions in DNA from two independent NF2 families and alterations in meningiomas from two unrelated NF2 patients. The candidate gene encodes a 587 amino acid protein with striking similarity to several members of a family of proteins proposed to link cytoskeletal components with proteins in the cell membrane. The NF2 gene may therefore constitute a novel class of tumor suppressor gene.