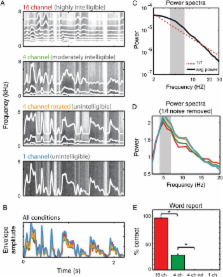 A growing body of evidence shows that ongoing oscillations in auditory cortex modulate their phase to match the rhythm of temporally regular acoustic stimuli, increasing sensitivity to relevant environmental cues and improving detection accuracy. In the current study, we test the hypothesis that nonsensory information provided by linguistic content enhances phase-locked responses to intelligible speech in the human brain. Sixteen adults listened to meaningful sentences while we recorded neural activity using magnetoencephalography. Stimuli were processed using a noise-vocoding technique to vary intelligibility while keeping the temporal acoustic envelope consistent. We show that the acoustic envelopes of sentences contain most power between 4 and 7 Hz and that it is in this frequency band that phase locking between neural activity and envelopes is strongest. Bilateral oscillatory neural activity phase-locked to unintelligible speech, but this cerebro-acoustic phase locking was enhanced when speech was intelligible. This enhanced phase locking was left lateralized and localized to left temporal cortex. Together, our results demonstrate that entrainment to connected speech does not only depend on acoustic characteristics, but is also affected by listeners’ ability to extract linguistic information. This suggests a biological framework for speech comprehension in which acoustic and linguistic cues reciprocally aid in stimulus prediction.

J Kujala,  R Salmelin,  Kirsi M. Hämäläinen … (2001)
Functional connectivity between cortical areas may appear as correlated time behavior of neural activity. It has been suggested that merging of separate features into a single percept ("binding") is associated with coherent gamma band activity across the cortical areas involved. Therefore, it would be of utmost interest to image cortico-cortical coherence in the working human brain. The frequency specificity and transient nature of these interactions requires time-sensitive tools such as magneto- or electroencephalography (MEG/EEG). Coherence between signals of sensors covering different scalp areas is commonly taken as a measure of functional coupling. However, this approach provides vague information on the actual cortical areas involved, owing to the complex relation between the active brain areas and the sensor recordings. We propose a solution to the crucial issue of proceeding beyond the MEG sensor level to estimate coherences between cortical areas. Dynamic imaging of coherent sources (DICS) uses a spatial filter to localize coherent brain regions and provides the time courses of their activity. Reference points for the computation of neural coupling may be based on brain areas of maximum power or other physiologically meaningful information, or they may be estimated starting from sensor coherences. The performance of DICS is evaluated with simulated data and illustrated with recordings of spontaneous activity in a healthy subject and a parkinsonian patient. Methods for estimating functional connectivities between brain areas will facilitate characterization of cortical networks involved in sensory, motor, or cognitive tasks and will allow investigation of pathological connectivities in neurological disorders.

Matthew Brett,  Chris Rorden (1999)
Traditionally lesion location has been reported using standard templates, text based descriptions or representative raw slices from the patient's CT or MRI scan. Each of these methods has drawbacks for the display of neuroanatomical data. One solution is to display MRI scans in the same stereotaxic space popular with researchers working in functional neuroimaging. Presenting brains in this format is useful as the slices correspond to the standard anatomical atlases used by neuroimagers. In addition, lesion position and volume are directly comparable across patients. This article describes freely available software for presenting stereotaxically aligned patient scans. This article focuses on MRI scans, but many of these tools are also applicable to other modalities (e.g. CT, PET and SPECT). We suggest that this technique of presenting lesions in terms of images normalized to standard stereotaxic space should become the standard for neuropsychological studies.

Dynamics of ongoing activity: explanation of the large variability in evoked cortical responses.

A Sterkin,  A Arieli,  A Grinvald … (1996)
Evoked activity in the mammalian cortex and the resulting behavioral responses exhibit a large variability to repeated presentations of the same stimulus. This study examined whether the variability can be attributed to ongoing activity. Ongoing and evoked spatiotemporal activity patterns in the cat visual cortex were measured with real-time optical imaging; local field potentials and discharges of single neurons were recorded simultaneously, by electrophysiological techniques. The evoked activity appeared deterministic, and the variability resulted from the dynamics of ongoing activity, presumably reflecting the instantaneous state of cortical networks. In spite of the large variability, evoked responses in single trials could be predicted by linear summation of the deterministic response and the preceding ongoing activity. Ongoing activity must play an important role in cortical function and cannot be ignored in exploration of cognitive processes.