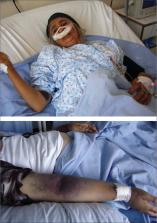 Crimean-Congo haemorrhagic fever (CCHF) is an often fatal viral infection described in about 30 countries, and it has the most extensive geographic distribution of the medically important tickborne viral diseases, closely approximating the known global distribution of Hyalomma spp ticks. Human beings become infected through tick bites, by crushing infected ticks, after contact with a patient with CCHF during the acute phase of infection, or by contact with blood or tissues from viraemic livestock. Clinical features commonly show a dramatic progression characterised by haemorrhage, myalgia, and fever. The levels of liver enzymes, creatinine phosphokinase, and lactate dehydrogenase are raised, and bleeding markers are prolonged. Infection of the endothelium has a major pathogenic role. Besides direct infection of the endothelium, indirect damage by viral factors or virus-mediated host-derived soluble factors that cause endothelial activations and dysfunction are thought to occur. In diagnosis, enzyme-linked immunoassay and real-time reverse transcriptase PCR are used. Early diagnosis is critical for patient therapy and prevention of potential nosocomial infections. Supportive therapy is the most essential part of case management. Recent studies suggest that ribavirin is effective against CCHF, although definitive studies are not available. Health-care workers have a serious risk of infection, particularly during care of patients with haemorrhages from the nose, mouth, gums, vagina, and injection sites. Simple barrier precautions have been reported to be effective.

Marcus Panning,  Stephan Günther,  Stefan Schilling … (2002)
Viral hemorrhagic fevers (VHFs) are acute infections with high case fatality rates. Important VHF agents are Ebola and Marburg viruses (MBGV/EBOV), Lassa virus (LASV), Crimean-Congo hemorrhagic fever virus (CCHFV), Rift Valley fever virus (RVFV), dengue virus (DENV), and yellow fever virus (YFV). VHFs are clinically difficult to diagnose and to distinguish; a rapid and reliable laboratory diagnosis is required in suspected cases. We have established six one-step, real-time reverse transcription-PCR assays for these pathogens based on the Superscript reverse transcriptase-Platinum Taq polymerase enzyme mixture. Novel primers and/or 5'-nuclease detection probes were designed for RVFV, DENV, YFV, and CCHFV by using the latest DNA database entries. PCR products were detected in real time on a LightCycler instrument by using 5'-nuclease technology (RVFV, DENV, and YFV) or SybrGreen dye intercalation (MBGV/EBOV, LASV, and CCHFV). The inhibitory effect of SybrGreen on reverse transcription was overcome by initial immobilization of the dye in the reaction capillaries. Universal cycling conditions for SybrGreen and 5'-nuclease probe detection were established. Thus, up to three assays could be performed in parallel, facilitating rapid testing for several pathogens. All assays were thoroughly optimized and validated in terms of analytical sensitivity by using in vitro-transcribed RNA. The >or=95% detection limits as determined by probit regression analysis ranged from 1,545 to 2,835 viral genome equivalents/ml of serum (8.6 to 16 RNA copies per assay). The suitability of the assays was exemplified by detection and quantification of viral RNA in serum samples of VHF patients.

Climate variability and change in the United States: potential impacts on vector- and rodent-borne diseases.

D J Gubler,  M. P. Reiter,  K L Ebi … (2001)
Diseases such as plague, typhus, malaria, yellow fever, and dengue fever, transmitted between humans by blood-feeding arthropods, were once common in the United States. Many of these diseases are no longer present, mainly because of changes in land use, agricultural methods, residential patterns, human behavior, and vector control. However, diseases that may be transmitted to humans from wild birds or mammals (zoonoses) continue to circulate in nature in many parts of the country. Most vector-borne diseases exhibit a distinct seasonal pattern, which clearly suggests that they are weather sensitive. Rainfall, temperature, and other weather variables affect in many ways both the vectors and the pathogens they transmit. For example, high temperatures can increase or reduce survival rate, depending on the vector, its behavior, ecology, and many other factors. Thus, the probability of transmission may or may not be increased by higher temperatures. The tremendous growth in international travel increases the risk of importation of vector-borne diseases, some of which can be transmitted locally under suitable circumstances at the right time of the year. But demographic and sociologic factors also play a critical role in determining disease incidence, and it is unlikely that these diseases will cause major epidemics in the United States if the public health infrastructure is maintained and improved.

Chris A. Whitehouse (2004)
Crimean-Congo hemorrhagic fever (CCHF) is a tick-borne disease caused by the arbovirus Crimean-Congo hemorrhagic fever virus (CCHFV), which is a member of the Nairovirus genus (family Bunyaviridae). CCHF was first recognized during a large outbreak among agricultural workers in the mid-1940s in the Crimean peninsula. The disease now occurs sporadically throughout much of Africa, Asia, and Europe and results in an approximately 30% fatality rate. After a short incubation period, CCHF is characterized by a sudden onset of high fever, chills, severe headache, dizziness, back, and abdominal pains. Additional symptoms can include nausea, vomiting, diarrhea, neuropsychiatric, and cardiovascular changes. In severe cases, hemorrhagic manifestations, ranging from petechiae to large areas of ecchymosis, develop. Numerous genera of ixodid ticks serve both as vector and reservoir for CCHFV; however, ticks in the genus Hyalomma are particularly important to the ecology of this virus. In fact, occurrence of CCHF closely approximates the known world distribution of Hyalomma spp. ticks. Therefore, exposure to these ticks represents a major risk factor for contracting disease; however, other important risk factors are known and are discussed in this review. In recent years, major advances in the molecular detection of CCHFV, particularly the use of real-time reverse transcription-polymerase chain reaction (RT-PCR), in clinical and tick samples have allowed for both rapid diagnosis of disease and molecular epidemiology studies. Treatment options for CCHF are limited. Immunotherapy and ribavirin have been tried with varying degrees of success during sporadic outbreaks of disease, but no case-controlled trials have been conducted. Consequently, there is currently no antiviral treatment for CCHF approved by the U.S. Food and Drug Administration (FDA). However, renewed interested in CCHFV, as well as increased knowledge of its basic biology, may lead to improved therapies in the future. This article reviews the history, epidemiology, ecology, clinical features, pathogenesis, diagnosis, and treatment of CCHF. In addition, recent advances in the molecular biology of CCHFV are presented, and issues related to its possible use as a bioterrorism agent are discussed.