LANTERN: a randomized study of QVA149 versus salmeterol/fluticasone combination in patients with COPD 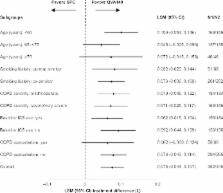 The current Global initiative for chronic Obstructive Lung Disease (GOLD) treatment strategy recommends the use of one or more bronchodilators according to the patient’s airflow limitation, their history of exacerbations, and symptoms. The LANTERN study evaluated the effect of the long-acting β 2-agonist (LABA)/long-acting muscarinic antagonist (LAMA) dual bronchodilator, QVA149 (indacaterol/glycopyrronium), as compared with the LABA/inhaled corticosteroid, salmeterol/fluticasone (SFC), in patients with moderate-to-severe COPD with a history of ≤1 exacerbation in the previous year.

In this double-blind, double-dummy, parallel-group study, 744 patients with moderate-to-severe COPD with a history of ≤1 exacerbations in the previous year were randomized (1:1) to QVA149 110/50 μg once daily or SFC 50/500 μg twice daily for 26 weeks. The primary endpoint was noninferiority of QVA149 versus SFC for trough forced expiratory volume in 1 second (FEV 1) at week 26.

Overall, 676 patients completed the study. The primary objective of noninferiority between QVA149 and SFC in trough FEV 1 at week 26 was met. QVA149 demonstrated statistically significant superiority to SFC for trough FEV 1 (treatment difference [Δ]=75 mL; P<0.001). QVA149 demonstrated a statistically significant improvement in standardized area under the curve (AUC) from 0 hours to 4 hours for FEV 1 (FEV 1 AUC 0–4h) at week 26 versus SFC (Δ=122 mL; P<0.001). QVA149 and SFC had similar improvements in transition dyspnea index focal score, St George Respiratory Questionnaire total score, and rescue medication use. However, QVA149 significantly reduced the rate of moderate or severe exacerbations by 31% ( P=0.048) over SFC. Overall, the incidence of adverse events was comparable between QVA149 (40.1%) and SFC (47.4%). The incidence of pneumonia was threefold lower with QVA149 (0.8%) versus SFC (2.7%).

These findings support the use of the LABA/LAMA, QVA149 as an alternative treatment, over LABA/inhaled corticosteroid, in the management of moderate-to-severe COPD patients (GOLD B and GOLD D) with a history of ≤1 exacerbation in the previous year.

Peter D’Andrea,  Hungta Chen,  C Vogelmeier … (2013)
QVA149 is an inhaled fixed-dose combination therapy under development for the treatment of chronic obstructive pulmonary disease (COPD). It combines indacaterol (a longacting β2-agonist) with glycopyrronium (a longacting muscarinic antagonist) as a dual bronchodilator. We aimed to compare the efficacy, safety, and tolerability of QVA149 versus salmeterol-fluticasone (SFC) over 26 weeks in patients with moderate-to-severe COPD. In this multicentre double-blind, double-dummy, parallel-group study, 523 patients (age 40 years or older, Global Initiative for Chronic Obstructive Lung Disease [GOLD] stages II-III, without exacerbations in the previous year) were randomly assigned (1:1; via automated, interactive response technology and stratified for smoking status) to once-daily QVA149 110/50 μg or twice-daily SFC 50/500 μg for 26 weeks. Efficacy was assessed in the full analysis set (randomised patients who received at least one dose of study drug); safety was assessed in all patients who received at least one dose of study drug. The primary endpoint was to demonstrate the superiority of QVA149 compared with SFC for the standardised area under the curve from 0 to 12 h post dose for forced expiratory volume in 1 second (FEV1 AUC0-12h) after 26 weeks of treatment. This trial was registered at ClinicalTrial.gov, NCT01315249. Between March 25, 2011, and March 12, 2012, 259 patients were randomly assigned to receive QVA149 and 264 to receive SFC. At week 26, FEV1 AUC0-12h was significantly higher with QVA149 than with SFC (treatment difference 0·138 L; 95% CI 0·100-0·176; p<0·0001). Overall incidence of adverse events (including COPD exacerbations) was 55·4% (143 of 258) for the QVA149 group and 60·2% (159 of 264) for the SFC group. Incidence of serious adverse events was similar between treatment groups (QVA149, 13 of 258 [5·0%]; SFC 14 of 264 [5·3%]); COPD worsening was the most frequent serious adverse event (one of 13 [0·4%] and three of 14 [1·1%], respectively). Once-daily QVA149 provides significant, sustained, and clinically meaningful improvements in lung function versus twice-daily SFC, with significant symptomatic benefit. These results indicate the potential of dual bronchodilation as a treatment option for non-exacerbating symptomatic COPD patients. Novartis Pharma AG. Copyright © 2013 Elsevier Ltd. All rights reserved.

Effectiveness of fluticasone propionate and salmeterol combination delivered via the Diskus device in the treatment of chronic obstructive pulmonary disease.

Tushar Shah,  Donald Mahler,  Bill J. Yates … (2002)
This randomized controlled trial examined the benefits of combining an inhaled corticosteroid, fluticasone propionate (F), with an inhaled long-acting beta(2)-agonist, salmeterol (S), to treat the inflammatory and bronchoconstrictive components of chronic obstructive pulmonary disease (COPD). A total of 691 patients with COPD received the combination of F and S (FSC), S (50 mcg), F (500 mcg), or placebo twice daily via the Diskus device for 24 weeks. A significantly greater increase in predose FEV(1) at the endpoint was observed after FSC (156 ml) compared with S (107 ml, p = 0.012) and placebo (-4 ml, p < 0.0001). A significantly greater increase in 2-hour postdose FEV(1) at the endpoint was observed after treatment with FSC (261 ml) compared with F (138 ml, p < 0.001) and placebo (28 ml, p < 0.001). There were greater improvements in the Transition Dyspnea Index with FSC (2.1) compared with F (1.3, p = 0.033), S (0.9, p < 0.001), and placebo (0.4, p < 0.0001). The incidence of adverse effects (except for an increase in oral candidiasis with FSC and F) was similar among the treatment groups. We conclude that FSC improved lung function and reduced the severity of dyspnea compared with individual components and placebo.