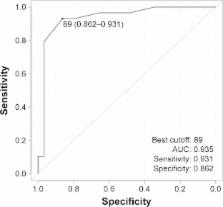 Pulmonary hypertension and exercise-induced oxygen desaturation (EID) influence acute exacerbation of COPD. Computed tomography (CT)-detected pulmonary artery (PA) enlargement is independently associated with acute COPD exacerbations. Associations between PA to aorta (PA:A) ratio and EID in patients with COPD have not been reported. We hypothesized that the PA:A ratio correlated with EID and that results of the 6-minute walk test (6MWT) would be useful for predicting the risk associated with PA:A >1.

We retrospectively measured lung function, 6MWT, emphysema area, and PA enlargement on CT in 64 patients with COPD. The patients were classified into groups with PA:A ≤1 and >1. Receiver-operating characteristic curves were used to determine the threshold values with the best cutoff points to predict patients with PA:A >1.

Clinical and Radiologic Disease in Smokers With Normal Spirometry.

Elizabeth A Regan,  David A Lynch,  Douglas Curran-Everett … (2015)
Airflow obstruction on spirometry is universally used to define chronic obstructive pulmonary disease (COPD), and current or former smokers without airflow obstruction may assume that they are disease free.