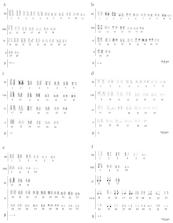 The family Doradidae ( Siluriformes ) is an important group of fishes endemic to freshwater ecosystems in South America. Some cytogenetic studies have been conducted focused on the group; however, there are no reports on the occurrence of B chromosomes for the family. In this paper the chromosomal characteristics of Platydoras armatulus (Valenciennes, 1840), Pterodoras granulosus (Valenciennes, 1821) and Ossancora punctata (Kner, 1855) were investigated through classical cytogenetics approaches. The conventional staining reveals 2n=58 in Platydoras armatulus and Pterodoras granulosus , however with distinct karyotypic formulae, possibly originated by pericentric inversions. In Ossancora punctata a derivate karyotype was described with 2n=66 and predominance of acrocentric chromosomes. The C banding pattern was resolutive in discriminating the three species, being considered an important cytotaxonomic marker. All species showed B chromosomes totally heterochromatic with non-Mendelian segregation during meiosis and low frequencies in mitotic cells. The probably origin of these additional elements was through fragmentations of chromosomes of the standard complement, which occurred recently and independently in these three species. The diploid number observed in Ossancora punctata is an evidence of centric fusions and up to the moment it is the highest diploid number reported for Doradidae .

The Genome of Nectria haematococca: Contribution of Supernumerary Chromosomes to Gene Expansion

Timothy Sharbel,  Leo Beukeboom,  Carlos Camacho (2000)
B chromosomes are extra chromosomes to the standard complement that occur in many organisms. They can originate in a number of ways including derivation from autosomes and sex chromosomes in intra- and interspecies crosses. Their subsequent molecular evolution resembles that of univalent sex chromosomes, which involves gene silencing, heterochromatinization and the accumulation of repetitive DNA and transposons. B-chromosome frequencies in populations result from a balance between their transmission rates and their effects on host fitness. Their long-term evolution is considered to be the outcome of selection on the host genome to eliminate B chromosomes or suppress their effects and on the B chromosome's ability to escape through the generation of new variants. Because B chromosomes interact with the standard chromosomes, they can play an important role in genome evolution and may be useful for studying molecular evolutionary processes.