One Solution for Two Challenges: The Lizard Microlophus atacamensis Avoids Overheating by Foraging in Intertidal Shores 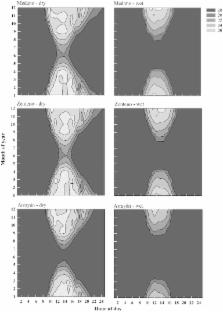 In lizards, one of the most important behavioral mechanisms to cope with spatial and temporal variations in thermal resources observed is activity time. The longer a lizard can maintain activity, the more time it has to forage and reach larger adult body size. We studied the behavioral adjustments to different climatic regimens on daily and seasonal scales in three natural populations of the lizard Microlophus atacamensis along a latitudinal temperature and rainfall gradient. We also used Niche Mapper to determinate the amount of thermally suitable time for activity for this species. Abundance and daily activity patterns varied greatly over the year for the three populations. In summer and spring, the daily activity times were greater, and were reduced in fall and winter seasons. In summer, when stressful heat loads should prohibit activity over a midday gap, lizards did not show bimodal patterns of activity. Instead, they move to the cooler intertidal habitat. Abundance and thermal quality in the southernmost coolest site was lower, and the potential annual activity time decreases with latitude. Contrary to expectations, lizards from this locality showed the largest body sizes possibly due to diet and/or time to sexual maturation. Our results indicate that the intertidal habitat is a key factor that influences daily and seasonal activity of M. atacamensis lizards. While this habitat is not climatically optimal for lizards, it allows them to behaviorally extend their activity window and gain access to food in the intertidal areas.

The potential for behavioral thermoregulation to buffer "cold-blooded" animals against climate warming.

Michael Kearney,  Richard Shine,  Abigail W. Porter (2009)
Increasing concern about the impacts of global warming on biodiversity has stimulated extensive discussion, but methods to translate broad-scale shifts in climate into direct impacts on living animals remain simplistic. A key missing element from models of climatic change impacts on animals is the buffering influence of behavioral thermoregulation. Here, we show how behavioral and mass/energy balance models can be combined with spatial data on climate, topography, and vegetation to predict impacts of increased air temperature on thermoregulating ectotherms such as reptiles and insects (a large portion of global biodiversity). We show that for most "cold-blooded" terrestrial animals, the primary thermal challenge is not to attain high body temperatures (although this is important in temperate environments) but to stay cool (particularly in tropical and desert areas, where ectotherm biodiversity is greatest). The impact of climate warming on thermoregulating ectotherms will depend critically on how changes in vegetation cover alter the availability of shade as well as the animals' capacities to alter their seasonal timing of activity and reproduction. Warmer environments also may increase maintenance energy costs while simultaneously constraining activity time, putting pressure on mass and energy budgets. Energy- and mass-balance models provide a general method to integrate the complexity of these direct interactions between organisms and climate into spatial predictions of the impact of climate change on biodiversity. This methodology allows quantitative organism- and habitat-specific assessments of climate change impacts.

Abigail W. Porter,  S Adolph (1993)
Lizard life-history characteristics vary widely among species and populations. Most authors seek adaptive or phylogenetic explanations for life-history patterns, which are usually presumed to reflect genetic differences. However, lizard life histories are often phenotypically plastic, varying in response to temperature, food availability, and other environmental factors. Despite the importance of temperature to lizard ecology and physiology, its effects on life histories have received relatively little attention. We present a theoretical model predicting the proximate consequences of the thermal environment for lizard life histories. Temperature, by affecting activity times, can cause variation in annual survival rate and fecundity, leading to a negative correlation between survival rate and fecundity among populations in different thermal environments. Thus, physiological and evolutionary models predict the same qualitative pattern of life-history variation in lizards. We tested our model with published life-history data from field studies of the lizard Sceloporus undulatus, using climate and geographical data to reconstruct estimated annual activity seasons. Among populations, annual activity times were negatively correlated with annual survival rate and positively correlated with annual fecundity. Proximate effects of temperature may confound comparative analyses of lizard life-history variation and should be included in future evolutionary models.

Benjamin W. Sears,  Michael J Angilletta (2004)
Although most species of animals examined to date exhibit Bergmann's clines in body size, squamates tend to exhibit opposing patterns. Squamates might exhibit reversed Bergmann's clines because they tend to behaviorally regulate their body temperature effectively; the outcome of this thermoregulation is that warmer environments enable longer daily and annual durations of activity than cooler environments. Lizards of the genus Sceloporus provide an opportunity to understand the factors that give rise to contrasting thermal clines in body size because S. undulatus exhibits a standard Bergmann's cline whereas S. graciosus exhibits a reverse Bergmann's cline. Interestingly, rapid growth by individuals of both species involves adjustments of physiological processes that enable more efficient use of food. Patterns of adult body size are likely the evolutionary consequence of variation in juvenile survivorship among populations. In S. undulatus, delayed maturation at a relatively large body size is exhibited in cooler environments where juveniles experience higher survivorship, resulting in a Bergmann's cline. In S. graciosus, high juvenile survivorship is not consistently found in cooler environments, resulting in no cline or a reversed Bergmann's cline, i.e., geographic patterns in body size aren't necessarily produced by natural selection. Thus, discerning the mechanistic links between the thermal physiology of an organism and environment-specific rates of mortality will be critical to understanding the evolution of body size in relation to environmental temperature.