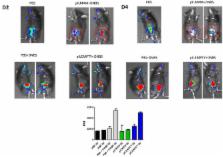 Faecalibacterium prausnitzii and its supernatant showed protective effects in different chemically-induced colitis models in mice. Recently, we described 7 peptides found in the F. prausnitzii supernatant, all belonging to a protein called Microbial Anti-inflammatory Molecule (MAM). These peptides were able to inhibit NF-κB pathway in vitro and showed anti-inflammatory properties in vivo in a DiNitroBenzene Sulfate (DNBS)-induced colitis model. In this current proof we tested MAM effect on NF-κB pathway in vivo, using a transgenic model of mice producing luciferase under the control of NF-κB promoter. Moreover, we tested this protein on Dextran Sodium Sulfate (DSS)-induced colitis in mice. To study the effect of MAM we orally administered to the mice a Lactococcus lactis strain carrying a plasmid containing the cDNA of MAM under the control of a eukaryotic promoter. L. lactis delivered plasmids in epithelial cells of the intestinal membrane allowing thus the production of MAM directly by host. We showed that MAM administration inhibits NF-κB pathway in vivo. We confirmed the anti-inflammatory properties of MAM in DNBS-induced colitis but also in DSS model. In DSS model MAM was able to inhibit Th1 and Th17 immune response while in DNBS model MAM reduced Th1, Th2, and Th17 immune response and increased TGFβ production.

An immunomodulatory molecule of symbiotic bacteria directs maturation of the host immune system.

Sarkis Mazmanian,  Arthur O Tzianabos,  Dennis Kasper … (2005)
The mammalian gastrointestinal tract harbors a complex ecosystem consisting of countless bacteria in homeostasis with the host immune system. Shaped by evolution, this partnership has potential for symbiotic benefit. However, the identities of bacterial molecules mediating symbiosis remain undefined. Here we show that, during colonization of animals with the ubiquitous gut microorganism Bacteroides fragilis, a bacterial polysaccharide (PSA) directs the cellular and physical maturation of the developing immune system. Comparison with germ-free animals reveals that the immunomodulatory activities of PSA during B. fragilis colonization include correcting systemic T cell deficiencies and T(H)1/T(H)2 imbalances and directing lymphoid organogenesis. A PSA mutant of B. fragilis does not restore these immunologic functions. PSA presented by intestinal dendritic cells activates CD4+ T cells and elicits appropriate cytokine production. These findings provide a molecular basis for host-bacterial symbiosis and reveal the archetypal molecule of commensal bacteria that mediates development of the host immune system.

Sarkis Mazmanian,  June Round,  Dennis Kasper (2008)
Humans are colonized by multitudes of commensal organisms representing members of five of the six kingdoms of life; however, our gastrointestinal tract provides residence to both beneficial and potentially pathogenic microorganisms. Imbalances in the composition of the bacterial microbiota, known as dysbiosis, are postulated to be a major factor in human disorders such as inflammatory bowel disease. We report here that the prominent human symbiont Bacteroides fragilis protects animals from experimental colitis induced by Helicobacter hepaticus, a commensal bacterium with pathogenic potential. This beneficial activity requires a single microbial molecule (polysaccharide A, PSA). In animals harbouring B. fragilis not expressing PSA, H. hepaticus colonization leads to disease and pro-inflammatory cytokine production in colonic tissues. Purified PSA administered to animals is required to suppress pro-inflammatory interleukin-17 production by intestinal immune cells and also inhibits in vitro reactions in cell cultures. Furthermore, PSA protects from inflammatory disease through a functional requirement for interleukin-10-producing CD4+ T cells. These results show that molecules of the bacterial microbiota can mediate the critical balance between health and disease. Harnessing the immunomodulatory capacity of symbiosis factors such as PSA might potentially provide therapeutics for human inflammatory disorders on the basis of entirely novel biological principles.

D J Sedergran,  Gudlavalleti Murthy,  Kunal Shah … (1993)
We undertook this study in order to fully characterize the clinical and histopathology features of the dextran sulfate sodium (DSS) model of experimental murine colitis and to discover the earliest histopathologic changes that lead to colitis. Acute colitis was induced in Swiss-Webster mice by 7 days of oral DSS with animals sacrificed daily. Chronic colitis was induced by: (a) 7 days of oral DSS followed by 7 days of H2O (for 1, 2, and 3 cycles) and (b) 7 days of oral DSS followed by 14 and 21 days of H2O. In each experimental group, the entire colons were examined histologically and correlated with clinical symptoms. Acute clinical symptoms (diarrhea and/or grossly bloody stool) were associated with the presence of erosions and inflammation. More importantly, the earliest histologic changes which predated clinical colitis was loss of the basal one-third of the crypt (day 3), which progressed with time to loss of the entire crypt resulting in erosions on day 5. The earliest changes were very focal and not associated with inflammation. Inflammation was a secondary phenomena and only became significant after erosions appeared. Animals treated with only 7 days of DSS followed by 14 and 21 days of H2O developed a chronic colitis with the following histologic features: areas of activity (erosions and inflammation), inactivity, crypt distortion, florid epithelial proliferation and possible dysplasia. These changes were similar to animals given 3 cycles of DSS. The clinical disease activity index correlated significantly with pathologic changes in both the acute and chronic phases of the disease. The mechanism of DSS colitis is presently unknown. However, the finding of crypt loss without proceeding or accompanying inflammation suggests that the initial insult is at the level of the epithelial cell with inflammation being a secondary phenomena. This may be a good model to study how early mucosal changes lead to inflammation and the biology of the colonic enterocyte. Chronic colitis induced after only 7 days of DSS may serve as a useful model to study the effects of pharmacologic agents in human inflammatory disease and mechanisms of perpetuation of inflammation. Finally, we believe that this model has the potential to study the dysplasia cancer sequence in inflammatory disease.

This article was submitted to Food Microbiology, a section of the journal Frontiers in Microbiology