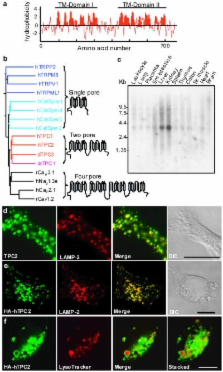 Ca 2+ mobilization from intracellular stores represents an important cell signaling process 1 which is regulated, in mammalian cells, by inositol 1,4,5-trisphosphate (InsP 3), cyclic ADP ribose (cADPR) and nicotinic acid adenine dinucleotide phosphate (NAADP). InsP 3 and cADPR release Ca 2+ from sarco / endoplasmic reticulum (S/ER) stores through activation of InsP 3 and ryanodine receptors (InsP 3Rs and RyRs). By contrast, the nature of the intracellular stores targeted by NAADP and molecular identity of the NAADP receptors remain controversial 1, 2, although evidence indicates that NAADP mobilizes Ca 2+ from lysosome-related acidic compartments 3, 4. Here we show that two-pore channels (TPCs) comprise a family of NAADP receptors, with TPC1 and TPC3 being expressed on endosomal and TPC2 on lysosomal membranes. Membranes enriched with TPC2 exhibit high affinity NAADP binding and TPC2 underpins NAADP-induced Ca 2+ release from lysosome-related stores that is subsequently amplified by Ca 2+-induced Ca 2+ release via InsP 3Rs. Responses to NAADP were abolished by disrupting the lysosomal proton gradient and by ablating TPC2 expression, but only attenuated by depleting ER Ca 2+ stores or blocking InsP 3Rs. Thus, TPCs form NAADP receptors that release Ca 2+ from acidic organelles, which can trigger additional Ca 2+ signals via S/ER. TPCs therefore provide new insights into the regulation and organization of Ca 2+ signals in animal cells and will advance our understanding of the physiological role of NAADP.

Grant Churchill,  Yuhei Okada,  Justyn Thomas … (2002)
Nicotinic acid adenine dinucleotide phosphate (NAADP) mobilizes Ca(2+) in many cells and species. Unlike other Ca(2+)-mobilizing messengers, NAADP mobilizes Ca(2+) from an unknown store that is not the endoplasmic reticulum, the store traditionally associated with messenger-mediated Ca(2+) signaling. Here, we demonstrate the presence of a Ca(2+) store in sea urchin eggs mobilized by NAADP that is dependent on a proton gradient maintained by an ATP-dependent vacuolar-type proton pump. Moreover, we provide pharmacological and biochemical evidence that this Ca(2+) store is the reserve granule, the functional equivalent of a lysosome in the sea urchin egg. These findings represent an unsuspected mechanism for messenger-mediated Ca(2+) release from lysosome-related organelles.

Alistair Hetherington,  Heather Knight,  Edgar Peiter … (2005)
Cytosolic free calcium ([Ca2+]cyt) is a ubiquitous signalling component in plant cells. Numerous stimuli trigger sustained or transient elevations of [Ca2+]cyt that evoke downstream stimulus-specific responses. Generation of [Ca2+]cyt signals is effected through stimulus-induced opening of Ca2+-permeable ion channels that catalyse a flux of Ca2+ into the cytosol from extracellular or intracellular stores. Many classes of Ca2+ current have been characterized electrophysiologically in plant membranes. However, the identity of the ion channels that underlie these currents has until now remained obscure. Here we show that the TPC1 ('two-pore channel 1') gene of Arabidopsis thaliana encodes a class of Ca2+-dependent Ca2+-release channel that is known from numerous electrophysiological studies as the slow vacuolar channel. Slow vacuolar channels are ubiquitous in plant vacuoles, where they form the dominant conductance at micromolar [Ca2+]cyt. We show that a tpc1 knockout mutant lacks functional slow vacuolar channel activity and is defective in both abscisic acid-induced repression of germination and in the response of stomata to extracellular calcium. These studies unequivocally demonstrate a critical role of intracellular Ca2+-release channels in the physiological processes of plants.

Jack H C Lee,  R Aarhus (1995)
We have previously shown that alkaline treatment of NADP generates a derivative which can mobilize Ca2+ from sea urchin egg homogenates (Clapper, D. L., Walseth, T. F., Dargie, P. J., and Lee, H. C. (1987) J. Biol. Chem. 262, 9561-9568). In this study, the active derivative was purified and shown by high pressure liquid chromatography to be distinct from NADP and NADPH. However, its proton NMR spectrum was virtually identical to that of NADP. The mass of its molecular ion was measured by high resolution mass spectrometry to be 743.0510, one mass unit larger than the corresponding ion of NADP. These results are consistent with the active derivative being nicotinic acid adenine dinucleotide phosphate (NAADP). Ca2+ release induced by NAADP was saturable with a half-maximal concentration of about 30 nM. The release was specific since NADP and nicotinic acid adenine dinucleotide were ineffective even at 10-40-fold higher concentrations. The NAADP-dependent Ca2+ release showed desensitization and was insensitive to heparin and a specific antagonist of cyclic ADP-ribose (cADPR), 8-amino-cADPR. The release mechanism did not require calmodulin. This is similar to the inositol trisphosphate-sensitive release but distinct from that of cADPR. That the NAADP-sensitive Ca2+ stores were different from those sensitive to inositol trisphosphate- or cADPR was further indicated by their differences in distribution on Percoll density gradients. Microinjection of NAADP into live sea urchin eggs induced transient elevation of intracellular Ca2+ and triggered the cortical reaction, indicating the NAADP-dependent mechanism is operative in intact cells.