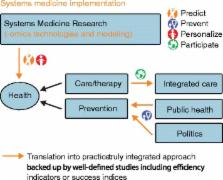 The cause of a complex disease cannot be pinpointed to a single origin; rather, a highly complex network of many factors that interact on different levels over time and space is disturbed. This complexity requires novel approaches to diagnosis, treatment, and prevention. To foster the necessary shift to a pro-active systems medicine, proof-of-concept studies are needed. Here, we highlight several systems approaches that have been shown to work within the field of respiratory medicine, and we propose the next steps for broader implementation.

Gene expression profiling and expanded immunohistochemistry tests to guide the use of adjuvant chemotherapy in breast cancer management: a systematic review and cost-effectiveness analysis.

R Rafia,  L Wyld,  A Pandor … (2013)
Gene expression profiling (GEP) and expanded immunohistochemistry (IHC) tests aim to improve decision-making relating to adjuvant chemotherapy for women with early breast cancer. The aim of this report is to assess the clinical effectiveness and cost-effectiveness of nine GEP and expanded IHC tests compared with current prognostic tools in guiding the use of adjuvant chemotherapy in patients with early breast cancer in England and Wales. The nine tests are BluePrint, Breast Cancer Index (BCI), IHC4, MammaPrint, Mammostrat, NPI plus (NPI+), OncotypeDX, PAM50 and Randox Breast Cancer Array. Databases searched included MEDLINE, MEDLINE In-Process & Other Non-Indexed Citations, EMBASE and The Cochrane Library. Databases were searched from January 2009 to May 2011 for the OncotypeDX and MammaPrint tests and from January 2002 to May 2011 for the other tests. A systematic review of the evidence on clinical effectiveness (analytical validity, clinical validity and clinical utility) and cost-effectiveness was conducted. An economic model was developed to evaluate the cost-effectiveness of adjuvant chemotherapy treatment guided by four of the nine test (OncotypeDX, IHC4, MammaPrint and Mammostrat) compared with current clinical practice in England and Wales, using clinicopathological parameters, in women with oestrogen receptor-positive (ER+), lymph node-negative (LN-), human epidermal growth factor receptor type 2-negative (HER2-) early breast cancer. The literature searches for clinical effectiveness identified 5993 citations, of which 32 full-text papers or abstracts (30 studies) satisfied the criteria for the effectiveness review. A narrative synthesis was performed. Evidence for OncotypeDX supported the prognostic capability of the test. There was some evidence on the impact of the test on decision-making and to support the case that OncotypeDX predicts chemotherapy benefit; however, few studies were UK based and limitations in relation to study design were identified. Evidence for MammaPrint demonstrated that the test score was a strong independent prognostic factor, but the evidence is non-UK based and is based on small sample sizes. Evidence on the Mammostrat test showed that the test was an independent prognostic tool for women with ER+, tamoxifen-treated breast cancer. The three studies appeared to be of reasonable quality and provided data from a UK setting (one study). One large study reported on clinical validity of the IHC4 test, with IHC4 score a highly significant predictor of distant recurrence. This study included data from a UK setting and appeared to be of reasonable quality. Evidence for the remaining five tests (PAM50, NPI+, BCI, BluePrint and Randox) was limited. The economic analysis suggests that treatment guided using IHC4 has the greatest potential to be cost-effective at a £20,000 threshold, given the low cost of the test; however, further research is needed on the analytical validity and clinical utility of IHC4, and the exact cost of the test needs to be confirmed. Current limitations in the evidence base produce significant uncertainty in the results. OncotypeDX has a more robust evidence base, but further evidence on its impact on decision-making in the UK and the predictive ability of the test in an ER+, LN-, HER- population receiving current drug regimens is needed. For MammaPrint and Mammostrat there were significant gaps in the available evidence and the estimates of cost-effectiveness produced were not considered to be robust by the External Assessment Group. Methodological weaknesses in the clinical evidence base relate to heterogeneity of patient cohorts and issues arising from the retrospective nature of the evidence. Further evidence is required on the clinical utility of all of the tests and on UK-based populations. A key area of uncertainty relates to whether the tests provide prognostic or predictive ability. The clinical evidence base for OncotypeDX is considered to be the most robust. The economic analysis suggested that treatment guided using IHC4 has the most potential to be cost-effective at a threshold of £20,000; however, the evidence base to support IHC4 needs significant further research. PROSPERO 2011:CRD42011001361, available from www.crd.york.ac.uk/PROSPERO/display_record.asp?ID=CRD42011001361.

Design and application of a generic clinical decision support system for multiscale data.

Jussi Mattila,  Juha Koikkalainen,  Arho Virkki … (2012)
Medical research and clinical practice are currently being redefined by the constantly increasing amounts of multiscale patient data. New methods are needed to translate them into knowledge that is applicable in healthcare. Multiscale modeling has emerged as a way to describe systems that are the source of experimental data. Usually, a multiscale model is built by combining distinct models of several scales, integrating, e.g., genetic, molecular, structural, and neuropsychological models into a composite representation. We present a novel generic clinical decision support system, which models a patient's disease state statistically from heterogeneous multiscale data. Its goal is to aid in diagnostic work by analyzing all available patient data and highlighting the relevant information to the clinician. The system is evaluated by applying it to several medical datasets and demonstrated by implementing a novel clinical decision support tool for early prediction of Alzheimer's disease.